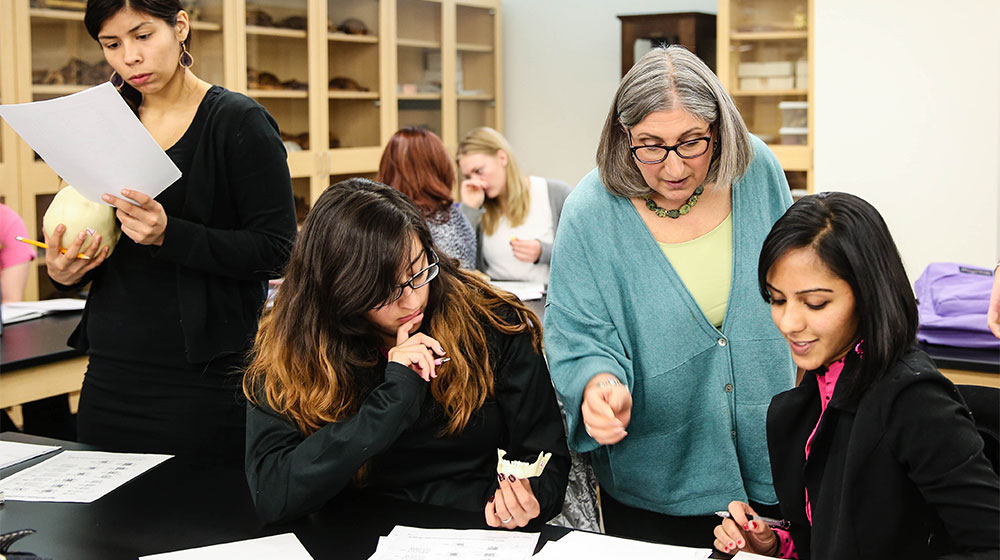 Professor Anne Grauer goes over an assignment with students in her human osteology class in the basement of BVM Hall. Grauer, who is the head of Loyola’s anthropology department, shows students how to examine bones to unearth clues about human life. (Photos by Natalie Battaglia.) 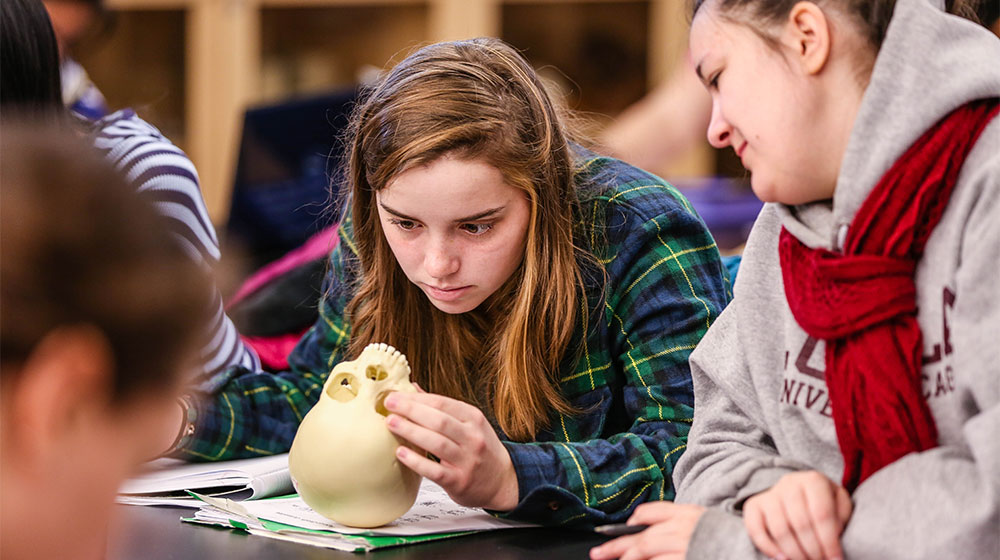 Loyola senior Melissa Farmer examines the teeth on a replica of a juvenile skull to figure out the age at time of death. “It’s one of the hardest classes I’ve taken,” Farmer said, “but you learn so much.” 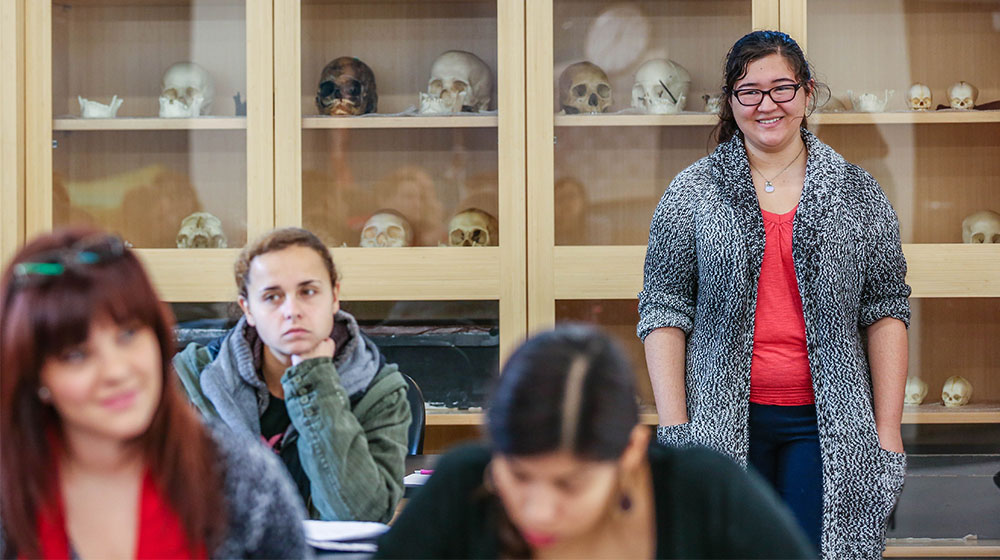 Fellow senior Alex Peterson (standing) took Grauer’s human osteology course in 2012. She liked the class so much, and did so well in it, that she now serves as a teaching assistant for current students.

Room 001 in the basement of BVM Hall looks like a cross between a haunted house and the set of a TV crime show.

There’s a human skeleton standing in a case in the corner. Bones are stored in boxes around the classroom. And skulls—dozens of them in all different sizes—rest on shelves behind glass doors.

But the room isn’t meant to scare anyone or serve as a backdrop for a new prime-time thriller. Instead, it’s where anthropology professor Anne Grauer teaches her human osteology students about bones—and all the things you can discover when you examine them.

“Many people think of bone as a rigid, static material,” said Grauer, who is the head of Loyola’s anthropology department. “But in fact it’s extraordinarily dynamic and malleable and able to tell us so much.”

By examining a part of the pelvis, for instance, Grauer can determine whether the remains are from a man or a woman. Measuring a skull and recording specific characteristics can shed light on someone’s ancestry, while looking at teeth can provide clues about a person’s diet.

That’s just a fraction of the information that Grauer and her students can glean from a set of bones to paint a picture of what humans were like centuries ago—and to make an educated guess about why humans look and behave the way they do today.

“We take a broad view of human life and use skeletons to learn about humans today, humans in the past, and humans in the future,” Grauer said.

The work of biological anthropologists extends far beyond the laboratory, Grauer said. They often conduct archaeological excavations to recover and protect human bones and can assist at crime scenes to help unearth clues for law enforcement. On a historical excavation, she said, anthropologists try to answer, “Who were these people and how did they live?” At a crime scene, however, they want to find out, “Who is this person and how did he or she die?”

But whether Grauer’s students want to study our ancient past or help solve criminal cases, the techniques they’ll use are the same. So Grauer gives her students the knowledge that will allow them to do both.

“I begin each semester by having the students focus on the tissue itself, and how it’s interconnected with every other system in our body,” Grauer said. “What you eat is going to affect bone development, and bone development is closely connected to the circulatory system. It’s an incredibly complex loop.”

Senior Alex Peterson took Grauer’s human osteology course in 2012. She liked the class so much—and did so well in it—that she now serves as a teaching assistant for current students.

“I came to Loyola because of Professor Grauer’s course,” said Peterson, who would like to become an anthropology professor herself. “She teaches you how to form a picture of the human skeletal system in your head, and that’s how you identify the fragments that you see.

“It’s definitely a challenging course, but I wouldn’t trade it for the world. It’s a fantastic class.”

“It’s one of the hardest classes I’ve taken—and Professor Grauer told us that at the beginning—but you learn so much,” said Farmer, who is applying to graduate school to study forensic anthropology.

“When she tells you, ‘At the end of the course I’m going to put a bone in a black box, and you’re going to be able to identify it,’ you think, ‘No way, that’s crazy.’

“But you actually can,” Farmer said. “And that’s very cool.”

In addition to her teaching duties, Grauer also works with the FBI and local law enforcement agencies. She and a group of Loyola students worked on the Burr Oak Cemetery case in 2009, in which a manager and three employees were accused of digging up bodies, dumping the remains elsewhere on the property, and then selling the emptied burial spaces to new families.

“About five of my students—I call them my ‘A Team’—came with me every single day, and they were able to find amazing amounts of material to assist the FBI and the Cook County Sheriff’s Office,” Grauer said.

The cemetery’s manager eventually pled guilty and was sentenced in 2011 to 12 years in prison; the other three employees are awaiting trial.

It’s a case that resonates with Grauer because of the cemetery’s historical significance.

“Burr Oak has been serving the African-American community for decades and decades,” she said. “It’s where Emmett Till is buried. It’s a wonderful place that deserves to be properly preserved.”

Grauer—who loved history and archaeology while growing up and considered going to medical school when she was younger—said anthropology allows her to combine her passions. And it’s the perfect major for students who, like her, are interested in more than one subject.

“Anthropology lets you explore everything,” she said, “and it’s all related to humans. It gives you this spectacular latitude to constantly ask questions and learn. It doesn’t matter if your interests rest in philosophy or fine arts or biology—they all fall under the umbrella of anthropology.”

Hometown: Born and raised in the Chicago area. She left when she was 18 but returned 12 years later to join the Loyola faculty.
Professor at Loyola since: 1988
Courses taught: Human Origins (ANTH 101); Evolution of Human Disease (ANTH 280); Paleopathology (ANTH 359); Human Osteology (ANTH 326).