May Weber Ethnographic Art Collection Finds a Home at Loyola 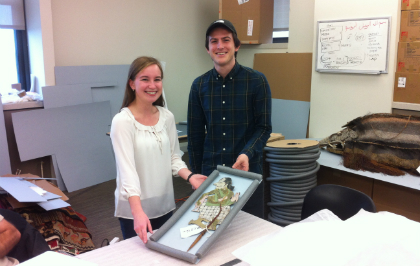 Seniors Tom Brown and Emily Dattilo, with one of the Indonesian shadow puppets in the collection.

A university acquisition that was years in the making is now giving students a chance to study non western folk art – and unravel the mind of a collector.

Loyola's Anthropology Department is curating pieces of art from the May Weber Ethnographic Art Collection. Dr. Weber, the late psychiatrist and collector, gifted the university over a thousand of the eclectic items she collected from across the globe.

Anthropology Professor Catherine Nichols and students in her anthropology internship course are now working to process the collection, researching the origins and significance behind each object, as well as Dr. Weber's collecting habits.

Weber collected objects from her own travels and worked with art dealers. She took a special interest in Latin America, Africa, and Asia, and was particularly fond of masks. The items in her collection range in size and origin from Thai coconut graters to massive Melanesian shields.

The collaboration between Loyola's anthropology department and Dr.Weber began more than a decade ago.

Professor Kathleen Adams was first approached in the mid-1990s, shortly after May Weber had closed the doors to her museum of cultural arts downtown. Weber was looking for people who might have an interest in using the collection for educational purposes. Professor Adams was happy to use it as a teaching tool for her classes and Weber welcomed Adams' students into her own home, giving them guided tours of the collection.

“She was very bright, and she had a vision for her collection,” Professor Adams said. “It was all about experiencing objects, and appreciating both their aesthetic and cultural value.”

Professor Adams and Dr. Weber remained friends for years, while her students got to study the items in the collection.

Dr. Weber also expressed an interest in giving her collection to Loyola upon her death. After initial talks with the university fell through, she began reaching out to other universities in Chicago. It wasn't until Father Michael Garanzini became president that Loyola renewed its interest.

With the help of Dr. Weber's husband, Gerald Hoffman, the university finally received a subset of the collection shortly after Dr. Weber's death in 2012.

The items from the collection are currently in storage. The department is almost finished constructing a research and storage facility on the 4th floor of Mundelein Center, where the collection will be available for research by students and scholars.