After Arrupe, another new beginning 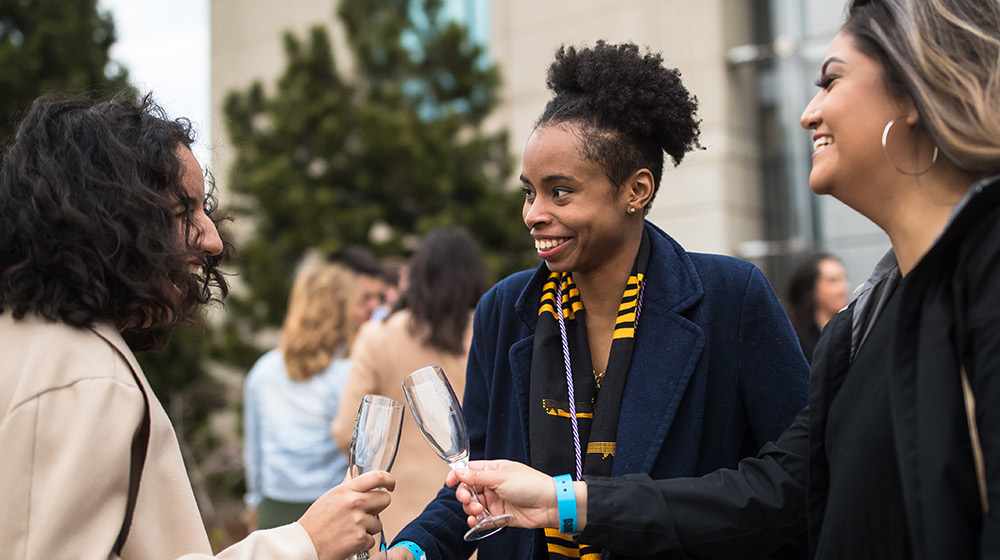 The only thing missing was her tassel. Loyola University Chicago senior Asya Meadows (AA ’17) was at the Baumhart bookstore collecting her cap and gown ahead of her graduation from the School of Communication, on May 9. She hugged the plastic-wrapped robe tight against her leather jacket. Downstairs, she laid it on a table, beaming. Her braids were piled high on her head, her eyes wide with excitement. “I’ve been waiting for this to come in,” she said. “It’s unreal right now. It’s not going to hit me until I walk the stage. And maybe not even then! Maybe like two days after, I’ll just start bawling.”

Graduating with a bachelor’s degree would have felt like a pipe dream four years ago, when Meadows—a Maywood, Illinois, native—was kicking around at St. Joseph’s High School, in suburban Westchester. Active in theater and on the track team, she found herself “cruising” in the classroom. (“I was like, ‘whatever man.’”) At an assembly towards the end of her final year, an admissions counselor clued Meadows into a new program Loyola was launching, one built to support “average students” like her—the daughter of a single mom, a woman of color from a working-class suburb, and a kid who just needed to fine-tune her academic skills. “They described the ideal Arrupe recruit,” she said, “It was me.”

It was nerve-racking enough to start college, much less at a school that itself was brand new. Meadows remembers a community that was collaborative yet tentative, searching for its footing. A summer retreat helped establish a social foundation. “I was surrounded by people that were very ambitious. They wanted more for themselves,” she said. “It infected me, wanting to do more.” When classes started, she commuted 45 minutes each way, balancing her coursework with a part-time gig at Old Navy. Meadows’ readings at Arrupe were more complicated, the essays longer, the rigor ratcheted up. Still, she felt supported by her professors; they were, to a person, approachable and sensitive. “It’s a lot of work to meet everybody where they’re at and then bring everybody to the same level,” she said. “Everybody has their own learning curve…They understand that life hits us in different ways.”

There were long nights at Maguire Hall, banging away until the building closed and then moving to a cafe down the block. Meadows flourished: Dean’s List; student body president; commencement speaker; one of a select number of Continuum Scholarship recipients, which provided funding for tuition, housing, meals, and books to Loyola, the only four-year college to which she applied. Life in Rogers Park, though, required another degree of acclimation. “Transferring into a predominantly-white institution was very overwhelming,” Meadows said, “and a little bit isolating.”

Once she found the Student Diversity and Multicultural Affairs office, in the Damen Student Center, things clicked into place: “That’s where I got my foot in the door, and where I felt comfortable adopting a new Loyola identity, while still holding onto my Arrupe identity.”

Two years on, Meadows is graduating with a degree in advertising and public relations, fields that are people-oriented and tap into her creativity. She hopes to lend her expertise in a nonprofit or arts setting, while taking acting classes on the side. For a woman literally born at the Loyola University Medical Center, donning a maroon mortarboard holds special significance.

“Tickets are unlimited, so I invited everybody,” she said. “I’m bringing the whole gang.”

Launched in 2015, Arrupe College is a two-year associate’s degree program that provides a rigorous liberal arts education to motivated students with limited financial resources and an interest in attending a four-year institution. In 2017, Meadows earned her associate's degree and became a member of the school's first graduting class. This spring, she was among the 47 percent of that first class who earned their bachelor’s degree in four years—two years after they received their associate’s at the inaugural commencement. An additional 37 percent is on track to graduate by the end of the year.

Nationally, only 34 percent of students who complete their associate’s degrees earn their bachelor’s degrees at the end of six years.

Learn more about Arrupe from its dean and executive director and how to apply.