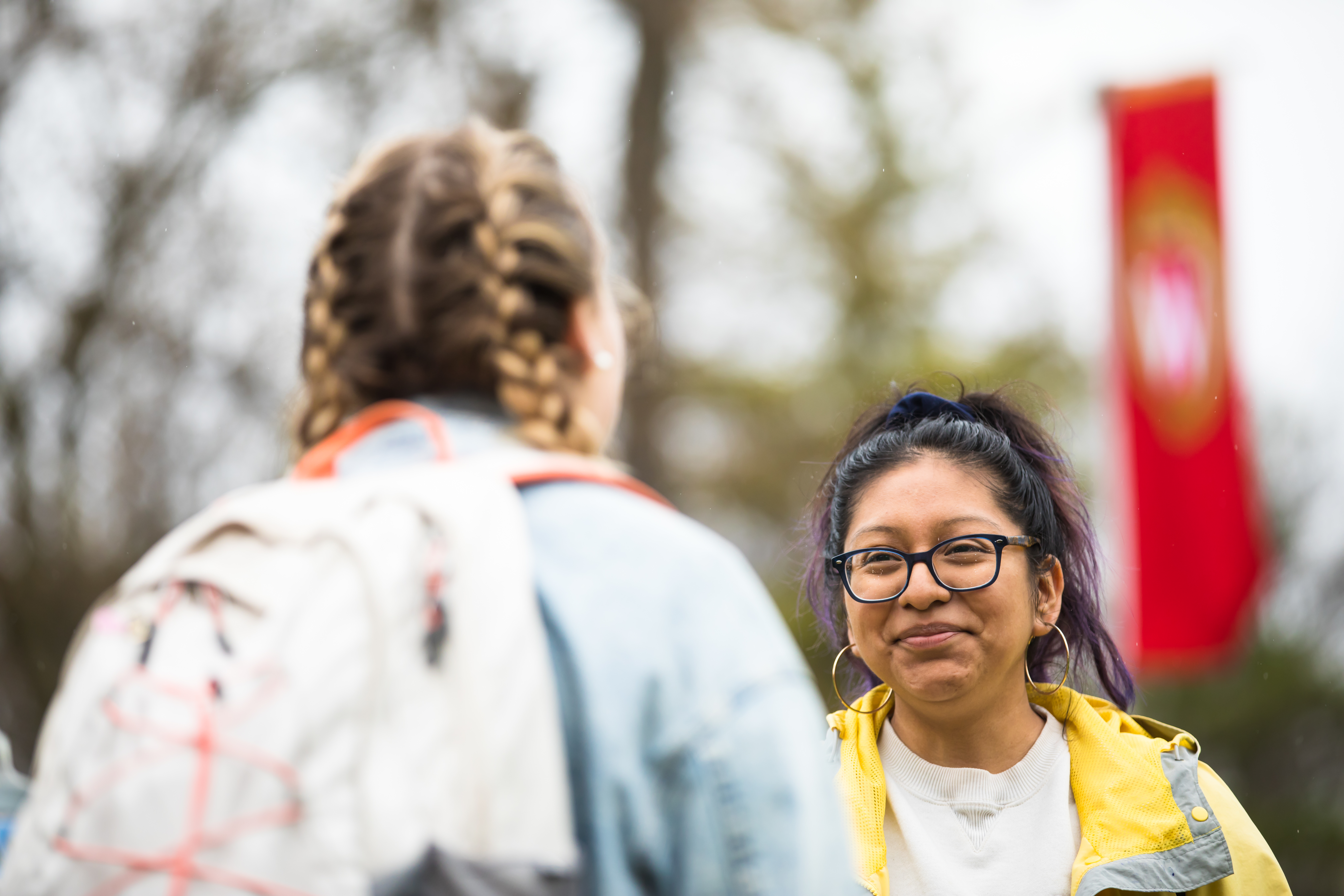 “The relationships I built at Arrupe continued on when I transferred to Wisconsin. I’m so grateful to be a part of such a supportive community.”

Transferring from one college to another can be a struggle, regardless of the circumstances. New campus, unfamiliar classmates, fresh expectations. When Jacky Cruz (AA '17) arrived at the University of Wisconsin-Madison, just weeks after graduating from Arrupe College with her associate’s degree, she felt completely disoriented. She’d never spent much time away from her close-knit Mexican-American family in Chicago’s Humboldt Park neighborhood. She knew hardly anything about Wisconsin culture. The state’s flagship campus was huge, too, and the student body richer and whiter than anywhere she’d studied previously. Jacky spent her first semester glued to a biology textbook, alternately cramming and crying from stress late at night. “Oh my god, it was so terrible!” she said. “It was such a slap to the face.”

Jacky escaped that biology class with a C. Afterwards, she regrouped, reminding herself of her own resolve. Though it felt seamless in retrospect, Jacky remembered that her transition to Arrupe from Lane Tech High School had not been without its bumps, either. Her Arrupe coursework—especially her writing classes—was demanding. “Because it was a new school,” Jacky said, “we were definitely learning while doing and working through bumps along the way.” She also worked full-time for Cricket Wireless during the school year, saving as much cash as she could muster in case she needed to fund her last two undergraduate years on her own.

She’d first heard about Arrupe after dialing Loyola University Chicago’s admissions office to explain that, because of the tuition price, she was denying their acceptance letter. The person on the other end of the phone tipped her off about a new, two-year school that was taking students. Intrigued, Jacky attended a slew of open houses and bombarded administrators with questions, trying to figure out exactly how higher education operated and if Arrupe was the right fit for her.

What Arrupe ended up providing was thorough and consistent academic guidance. “Everyone at Arrupe is super welcoming and understanding,” she said. “If you have any issues, you can talk it out at any time of the day.” In Madison, Jacky decided to build a replica of that support system for herself, as best she could. She canvassed for the proper advisor, auditioning people from different disciplines with whom she had no previous connections. She wasn't shy about asking for extra homework help or in seeking out scholarship assistance and tips for improving her study patterns. There was trial and error involved, to be sure. But her grades and her confidence improved quickly.

In reflecting on how far she’s come since beginning her college journey, Jacky recalls the constant encouragement she received from Arrupe’s faculty and staff – even after she graduated from Arrupe. “When I transferred to Wisconsin, there were days when I doubted myself and thought about leaving school,” Jacky said. “But a phone call with an Arrupe staff member reminded me that while the transition is the hardest part, you’ll eventually find your place.”

In spring 2019, Jacky graduated with a bachelor’s degree in rehabilitation psychology. After weighing job offers in Madison, Jacky decided to return to Chicago to be closer to her family. Her goal was to find a job where should could advocate for people in Chicago’s Latinx community. It’s a dream that might have fizzled if Jacky had never placed that difficult phone call to Loyola. “Sometimes I think about what would have happened if I came to Wisconsin from the beginning, for my freshman year,” she said. “I feel like I would have been lost and intimidated, and maybe even put off by the idea of going to university at all.”

Today, Jacky works as a bilingual recovery counselor at Trilogy Behavioral Healthcare. In her role, Jacky supports victims of domestic violence and individuals afflicted by substance abuse. For her, being able to foster relationships with her clients is what Jacky enjoys most. “Every internship and job I’ve held since college has involved setting goals with clients,” Jacky said. “Seeing those goals accomplished and the joy it brings people is so rewarding.”

Jacky recently accomplished a personal goal of her own. After setting aside funds for the past few years, Jacky and her brother were able to purchase their childhood home in Humboldt Park. “I’m ecstatic to be a homeowner. It’s even more special that it’s the home we’ve always known,” Jacky said.

Jacky’s next goal: earning her graduate degree in counseling from Northwestern University. She’ll begin her studies part-time in January 2022 while continuing her work with Trilogy.