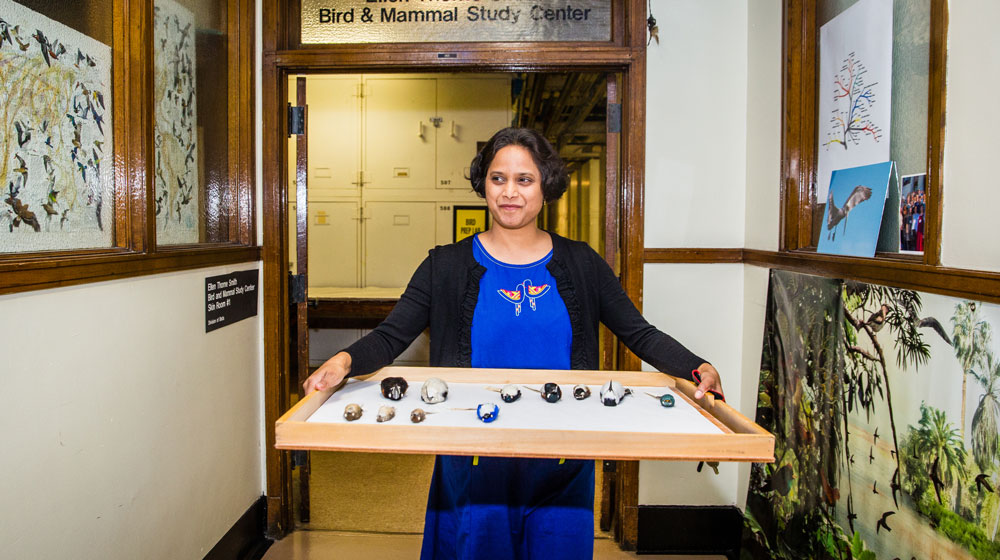 Loyola Associate Professor of Biology Sushma Reddy, PhD, gathers birds from Madagascar to showcase during Members' Nights at the Field Museum in May. (Photo: Natalie Battaglia)

Armed with a curious spirit and inquisitive nature, Sushma Reddy, PhD, ventured to India five years ago, planting the seeds for work that would lead to a rare scientific discovery.

Encouraged by an academic sabbatical from her role as an associate professor in Loyola University’s Department of Biology, Reddy spent five months in the Asian nation in 2012, establishing collaborative partnerships with scientists and investigating potential research projects related to the evolutionary history of birds, a diverse group of organisms that has long captivated scientists and nonscientists alike.

Over the subsequent years, Reddy, one of the globe’s most prominent evolutionary scientists studying birds, endured late-night Skype sessions with her Indian partners, analyzed data in a lab alongside a team of Loyola students, and slowly detailed the diversification of endemic birds in the Western Ghats, an isolated mountain range in southwest India.

“I love the excitement of solving a puzzle, asking questions about how a bird that looks the way it does came to be and how and why it changed,” says Reddy, who recently received the College of Arts and Sciences’ prestigious Sujack Family Faculty Research Excellence Award, an annual honor recognizing ambitious faculty scholarship.

Reddy’s leading role in the groundbreaking discovery of two new bird genera and one new bird species represents a truly unique accomplishment in the field of evolutionary biology. Discoveries of new bird species, in fact, have only trickled in over recent decades, adding prominence to Reddy’s work.

“You have to know enough about what does exist to know you have something that hasn’t been described before,” says Loyola Department of Biology chair and fellow evolutionary biologist James Cheverud. “That comes from a lot of careful work and knowledge, and is what truly impresses about Dr. Reddy’s research.”

Reddy’s findings underscore the still-existing dearth of knowledge about the biogeography of the Asian tropics, while also spotlighting the need for a more rigorous and systematic analysis to inform biodiversity studies and the conservation efforts critical to driving a deeper understanding of the Earth.

“Biology plays a key role in helping us all understand the Earth’s evolution,” Reddy says, reminding that the earliest evidence for continental drift came from biology, not geology.

It is Reddy’s ambitious questioning and devout curiosity that guides the work inside her Loyola-based lab, where a team of undergraduate and post-graduate researchers has helped propel Reddy’s scientific efforts while gaining valuable, hands-on experience in the process.

First as an undergraduate studying biology and now as a grad student, Matt Bonfitto has worked in Reddy’s lab for three years. Most recently, he began 3D scanning of bird bills, a practice on the cutting edge of biometrics and encouraged by Reddy.

“She stresses progressive lab techniques and is interested in finding new ways to test old questions,” Bonfitto says. “That’s what makes good research and it’s a model I’d like to follow as I head into the field.”

Cheverud calls Reddy’s work with undergraduates particularly admirable, as she involves them in treks to different U.S. museums and in taking lab measurements that then play into her research.

“That’s not something that happens everywhere,” Cheverud says. “These experiences are important to a student’s future and she mentors them so they can fulfill their dreams and desires.”

Now, Reddy and her cadre of lab students have turned their attention from India to the diversification of birds in Madagascar, an island nation off the southeastern coast of Africa.

Supported by a $690,000, three-year grant from the National Science Foundation, Reddy’s team continues collecting samples and data from thousands of individual birds representing hundreds of bird species. They are currently in the early stages of using that data to determine the morphological variation, plumage patterns, and geographic ranges of these species and their evolutionary relationships, specifically addressing why and how birds diversified in this isolated region.

“It’s work I love and it’s the real scientific questions that drive me,” Reddy says.

After all, she knows where that curiosity can lead.