Loyola students talk policy in the heart of Cuba 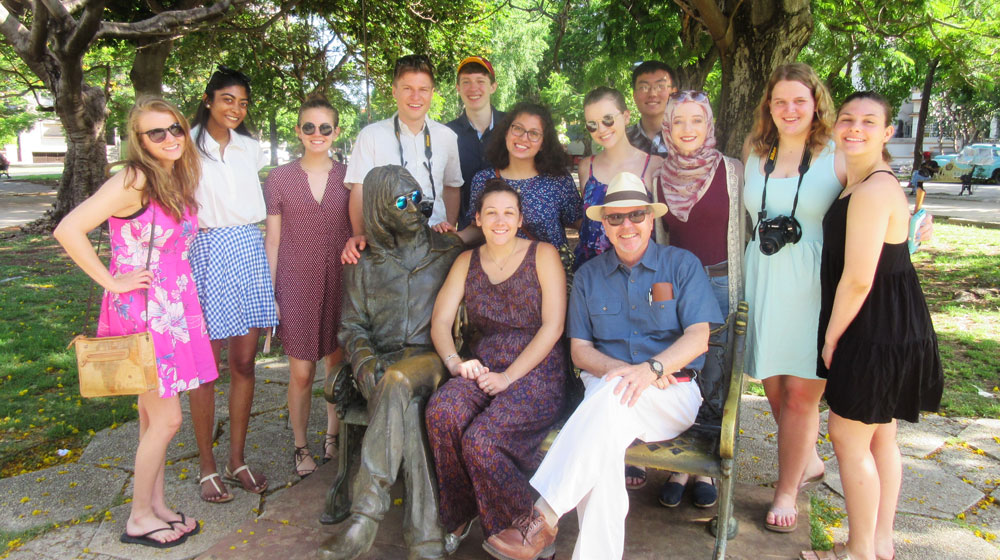 Political Science Professor Peter Sanchez sits in the John Lennon park in Havana, Cuba with his students. Sanchez took his class on a trip to Cuba this past summer to learn about Cuban culture, society, and politics.

When most students think about taking a political science course, they expect it to be inside a  classroom, and they certainly don’t expect to be completely immersed in a different culture. While that may be true for some political sciences classes, Professor Peter Sanchez felt with the recent changes to U.S.- Cuba policy that his class would be taught best in the actual place of discussion—Cuba.

Sanchez’s class, Contemporary Political Issues: Comparative Politics, focused on the Cuba we know today from a political and societal perspective. Although Sanchez hasn’t taken his class to Cuba since 2004, he knew that now was the prime time to learn about Cuban culture.

“When I began researching programs, I discovered the Loyola faculty-led program to Havana and immediately saw it as an exciting, once in a lifetime opportunity,” said International Studies and Spanish double major Elena Vera.

Sanchez and a dozen students listened to Cuban lectures, visited museums and organizations such as the Federation of Cuban Women, ventured to the small Cuban town of Viñales, enjoyed traditional Cuban cuisine, and more during their more than 2 week-long trip.

The highlight of the trip for Vera was the trip to Viñales. “Dealing with the extremely hot sun and dusty red soil was worth it because the green landscape of mountains, hills, and trees was absolutely beautiful,” she said.

Even Sanchez was surprised at what changes had occurred since the last time he visited the country. Compared to his trip 13 years ago, he said, Havana and Viñales have more economic activity and have many physical transformations.

The students enjoyed interacting with the citizens of Cuba and many were pleasantly surprised by the hospitability of the country's people. According to junior Isabel Caruso, getting to know Cuba’s people was a highlight of the trip and she greatly admired the pride Cubans have in their nation.

“Everybody we met was so genuinely sweet and really appreciated us being in their country. They wanted us to see what the authentic Cuban life was really like,” said Political Science and International Studies double major Bailey Ferguson.

Luckily for future political science students, Sanchez has committed to teaching the course in Cuba again this upcoming May and June. To students considering attending the trip, student participant Vera, who believes visitors to Cuba need to travel there with an open mind, says “go for it, you won’t be disappointed.”