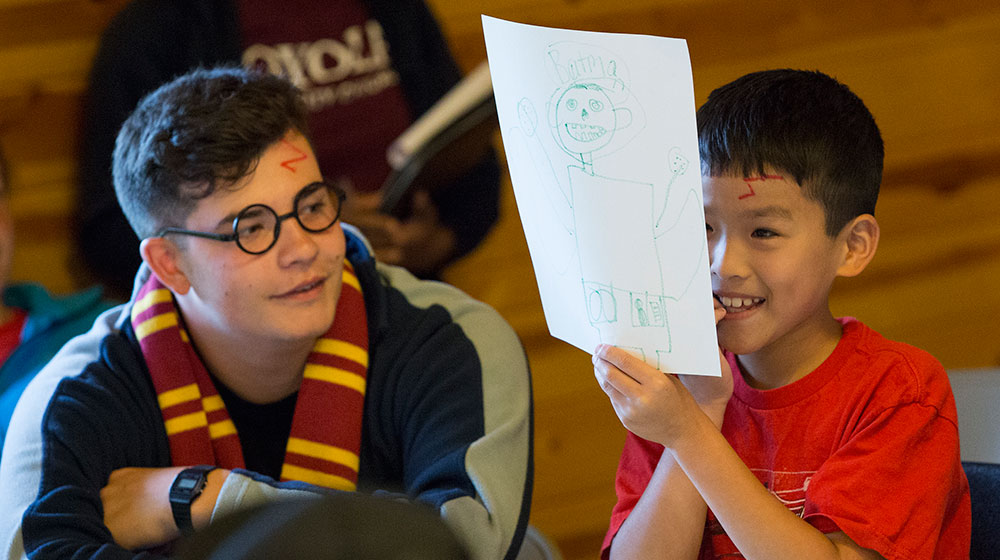 Camp Independence Counselor Tom Shaw looks at camper Zayne Hoffman’s superhero portrait during an intervention exercise. Loyola Psychology Professor Grayson Holmbeck created the intervention program at the camp with a goal of building independence and social skills within campers who have spina bifida.

Inside a log cabin on an especially gray and wet summer morning, Loyola alumna Natalie Lawson (BS ’17) asks a group of school-age campers to imagine that they could be a superhero. Who would they be, she asks, and what superpower would they have? The answers are exacting and varied.

“I would have shoes with wings at the bottom so I could fly,” said one young girl with crutches at her side and braces on both of her legs.

“I would have a poisonous sting,” said another camper.

“I would control lava and make it erupt whenever I wanted to,” said a young girl sitting in a small wheelchair.

At the end of the exercise Lawson asked campers to hold on to the “powers” in case they needed them. This was a key task for Lawson, who is part of a team of Loyola alumni, undergraduates, and graduate students working at Camp Independence. Located just an hour north of Chicago on 300 acres of woodlands, trails, and meadows along Fish Lake, the camp was originally developed by Dr. David McLone, a neurosurgeon from Lurie Children’s Hospital to serve young people with spina bifida. Then, Loyola Psychology Professor Grayson Holmbeck created the independence intervention.

In addition to outdoor summer fun, the camp includes some serious topics on skill-building and self-esteem. Studies by Holmbeck and other pediatric researchers have found that children with spina bifida often have difficulty making friends. That’s why Lawson’s exercise—an intervention—is a vital part of the curriculum for the weeklong sessions tailored to build independence and social skills within campers.

A break from the norm

Spina bifida is a congenital birth defect where the vertebrae don’t form properly around a baby’s spinal cord. It can cause various neurological and physical disabilities, and the effects can range from mild to severe. Some children with spina bifida have limited verbal skills and mobility, and they require significant amounts of care. Others, meanwhile, go on to graduate from college, establish professional careers, and lead ordinary lives. The range of effects is observable at Camp Independence, where some campers walk independently while others need assistance with a wheelchair, crutches, or braces.

Thanks to a grant from the Spastic Paralysis Research Foundation of the Illinois-Eastern Iowa District of Kiwanis International,  the camp, in partnership with YMCA of Metro Chicago, has been running this intervention program for 10 years at this location, with additional funding secured  for another 5 years. Holmbeck said the program lets campers be themselves without having to be confronted with the stigma of their condition.

“It’s often the first time in their lives that they don’t have anybody judging them or stigmatizing them,” he said. “It’s a very freeing experience for them, and they also get to socialize with other kids who have the same condition.”

The eight weeklong sessions over the summer are open to a range of campers, from children as young as 7 to adults age 20 and up. Participants are grouped by age, though gender balance is also considered.Days start as early as 8 a.m. and end around 8:30 p.m. Campers participate in games, swimming, and outdoor fun along with workshops on social skills and emotional and medical awareness.

Lawson said she is simply a facilitator but is also intentional in her work. She makes sure to sit in between the two tables of girls and boys during the intervention session.

“I hold the discussion but they do all the work,” said Lawson, who graduated this past May. “I know I am able-bodied, so I make sure I’m talking with them, not ‘to’ or ‘at’ them.”

This is 12-year-old Zuzanna Gorgol’s fourth visit to the camp. Gorgol, whose favorite activities are swimming and boating, said she knew she would have fun when she first start coming. But she’s also learned a lot.

“I’ve learned how to be independent, how to gain self-esteem, and to feel good about myself. Just cause I know I’m different and unique,” she said.

This specialty camp is also unique in that there is a 1:1 camper to counselor ratio, making it a very personal experience. In addition, the camp’s cabin is especially outfitted with a kitchen, several accessible bathrooms, washers/dryers, and two sleeping wings where counselors literally sleep in the same room as campers.

This closeness and fellowship amongst campers prompts some former attendees to want to return again and again. Some, like Breanna Patten, even become counselors.

Patten, 22, is in her third year as counselor.

“I really enjoy showing the kids what they could do,” she said. “I’m in college. I can drive. I think that it’s nice to find people that you can relate to and know what you’re going through.”

Improving the lives of these campers is one of the reasons Holmbeck’s team study both the campers and their families, who play a vital role in the degree to which the campers develop independence over their life span. After being at the site for a decade, the team knows of numerous returning campers and counselors like Patten, which has become the focus of their current research project: the cumulative or long-term effects of camp participation.

Colleen Driscoll, a graduate student in Loyola’s clinical psychology program, is currently leading the research for this longitudinal project. Driscoll said the preliminary findings show there are benefits to campers attending over multiple years.

“Across the board we see greater improvements in their self-management skills. They are becoming more independent,” she said. “They are taking more responsibility with their medical tasks, but their social skills didn’t change significantly if they came to camp more often.”

She said their research shows campers feel comfortable at camp because they don’t need to explain their condition to anyone. Also, the social environment at camp is drastically different from their everyday lives, where they may be bullied or have round-the-clock care at home and at school. Thus, building social skills and relationships may happen more gradually outside of camp.

Holmbeck and his team want to increase the involvement of parents and families in the intervention program but, as of right now, the program includes a post-camp meeting for parents where they determine the topic of discussion.

“They’re usually pretty anxious about their kid going to camp for the first time,” said Holmbeck.  “But once the kid gets to camp, this is like a big vacation for them—for both the parent and the child. It’s a break. It’s a stress reducer.”

The campers themselves echo this as well. Zayne Hoffman, 10, raves about swimming and going to the park. He wants to have fun like other kids and he also knows the camp is about learning how to “be independent.”

And, Lawson, the intervention facilitator, said she gains a lot from the experience as well.

“It’s really special. I love watching them socialize—just the joy in their faces, doing what every kid wants to do,” Lawson said. “By Tuesday or Wednesday, they’re saying ‘I never want to leave.’ All kids just want to be kids.”