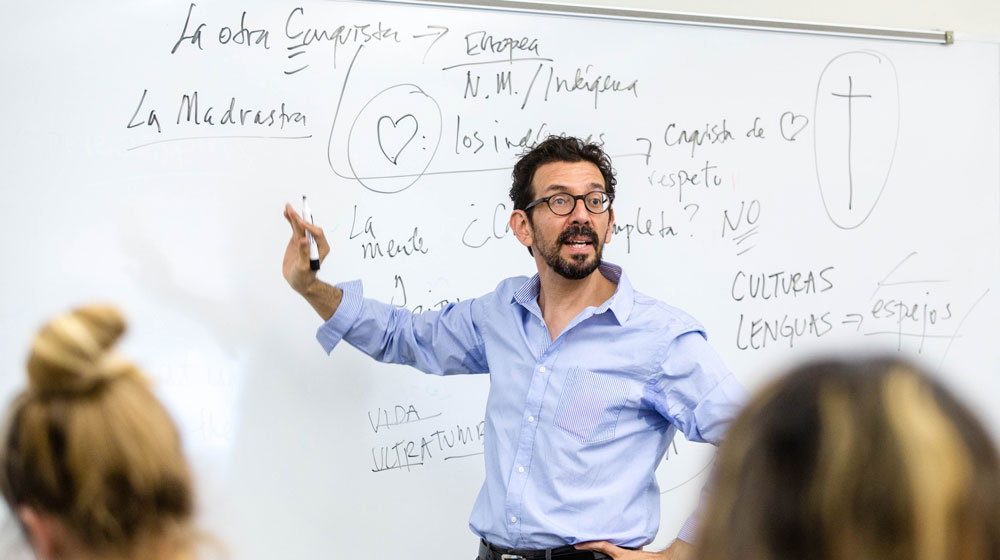 The 2017 Ignatius Loyola Award for Excellence in Teaching recipient is Héctor García Chávez, PhD, who is Program Director of Loyola’s Latin American and Latino Studies and instructor in Women´s Studies and Gender Studies and Interdisciplinary Honours Programs.

For Héctor García Chávez, intersectionality and conversation are at the core of his approach to his life and his teaching at Loyola. He has an open door office policy where his office hours—about six hours a week—extend literally beyond office doors into nearby cafés or campus lounge areas. The student and alumni conversations run the gamut from their current work to future graduate research interests. This is all part of his horizontal, inclusive approach to pedagogy. To García Chávez, it is about bringing students into the academia through one-on-one dialogue.

“Dr. García Chávez has been of immense support in my professional development, helping me work toward my goal of promoting the human right to health and quality healthcare,” Batycki said.

Indeed as this year’s Ignatius Loyola Award for Excellence in Teaching recipient, García Chávez, truly embodies commitment to education and betterment of future leaders. He holds several leadership roles at Loyola as the program director of Loyola’s Latin American and Latino Studies and Instructor in Women´s Studies and Gender Studies and Interdisciplinary Honours Programs. This summer, he launched the first Women’s Studies and Gender Studies summer program for undergraduate and graduate students in Barcelona, Spain.

At Loyola for 13 years, García Chávez speaks proudly of his past students who still contact him and ask for advice, but he will not immediately share that he is visually impaired due to an eye injury a decade ago that can delay his returning of papers sometimes. Despite his eye condition he has an uncanny ability to recall student names, their current studies, and research projects. This recollection and pride in student work speaks to how his students continue to inspire him and why he continues to advocate for social justice issues and engages with students in and outside the classroom.

Here he shares his teaching philosophy, how he keeps students engaged, and the works and figures that influence his philosophy.

As this year’s recipient of the Ignatius Loyola Award for Excellence in Teaching, you were chosen for excellence in all aspects of teaching. Would you mind telling me about your teaching philosophy?

It’s a learning process. It’s not easy. It’s something you tweak, you learn pedagogy and methodology. I think being fully bilingual and bicultural (he speaks and reads several languages) helps because we see and think differently in different languages. Being involved in the Faculty Center for Ignatian Pedagogy and working with the director Carol Scheidenhelm and other faculty, especially those who are part of our active WSGS Gender Research Seminar, have helped me develop my approach. It’s critical for me that students feel engaged. It’s important that I speak to them horizontally. They see me as the authority figure but they are part of the conversation as well. I don’t want to be in front of the classroom pointing left and right, speaking above them when they’re sitting down. I like to sit next to them and have them form small circles. This way they will speak to each other. It creates a horizontal conversation and movement in the classroom. This is how to make sure that students pay attention and realize that we ARE there and very much interested in having a conversation.

The award also celebrates faculty work outside of class time including advising/mentoring, teaching to mission, and engaging students in their learning. How do you keep your Loyola students engaged?

Students come to me directly; they know I will ask tough questions, bring in global perspectives, and make them read. There’s one student who just graduated in May who wanted to connect what she learned in the Women’s Studies and Gender Studies program, and in her role as a Gannon Scholar to what I had been teaching her in Spanish on Latin American and Mexican literature and film, which she applied to queer theory creatively outside the US. She applied for a provost fellowship through LUROP (Loyola Undergraduate Research Opportunities Program), earned it, and was able to do some research at universities in Mexico City, and met with faculty to discuss how Mexican history has influenced the construction of Mexican masculinities. But this took a long conversation. Projects such as hers keep me busy. Students want more time with you; they have questions. That’s why I hold lots of office hours both at the Lake Shore and Water Tower campuses. Some students are seeking course approvals for courses taken during study abroad while others want to know about master’s programs in comparative literature, cultural studies, or medical schools taught in Spanish. Others are seeking guidance for Fulbright, Rhodes Scholarships. It’s an honor, really, yet some students come to me feeling very overwhelmed and that’s where I come in: I believe I’m a good listener, I pay attention.

How does the Jesuit mission, Ignatian philosophy inform your teaching?

The social justice aspect of the Jesuit mission here is important. Some don’t realize that the Jesuit presence has been pretty powerful in Latin America since the 16th and 17th centuries. I went to a Jesuit high school and many in my immediate family attended Catholic schools. I and my family know cura personalis and being a person for others. Empathy and compassion come from home. It means we help others. We volunteered at soup kitchens and gave time to others in our community and neighborhood. I transfer that sentimentality, that empathy, into my teaching. I tell my students, “Let’s go out. Let’s make this course one that takes us to different parts of the city.” In the recent past, I’ve taken students to the Museum of Contemporary Art to see a play by Guillermo Calderón on Chile’s struggle for liberty during Pinochet’s dictatorship, visited The Goodman Theatre to experience the creative adaptation of Roberto Bolaño´s epic novel 2666 (NPR interviewed me for this unique play), and this month I will go with my students to The National Museum of Mexican Art to see a play based on the life of Sor Juana Inés de la Cruz—a Mexican XVII philosopher, feminist, and one-of-a-kind poet. These are examples of how young men and women here, our students at Loyola want to see more and apply their studies outside of the classroom.

When you accepted this award, you quoted Uruguayan journalist and writer Eduardo Galeano who famously said, “Al fin y al cabo, somos lo que hacemos para cambiar lo que somos," which loosely translates to “After all, we are what we do to change, who we are.” How would you interpret his words and how does this inform student awareness of the world and social justice?

It’s about change and resistance. It’s about changing minds, it’s about horizontal dialogue. Not verticality—top and bottom, which means there’s a definitive power structure there. We have to first recognize and then challenge these structures. Coming from a post-colonial perspective, I think Galeano was trying to speak to what’s happened to imperialist powers--those that come in to “save” or have their own agenda while local people are feeling disenfranchised and pushed out. He was self-exiled during Operation Condor—a collaborative effort of right-wing dictatorships in Argentina, Bolivia, Brazil, Chile, Paraguay, and Uruguay in the 70s and 80s with CIA ties---but continued to write passionately. So, yes, muchas gracias Galeano…change, resistance, solidarity, horizontal, Loyola. I love that. Because of the social justice aspect of his words and his activism, this is how I approach the new Barcelona program. It’s also how I teach Queer Theory, Masculinity Studies, and Mexican literature and film. History is not just something that happens once. It’s ongoing. I think young people need to realize there’s historical amnesia now in many places across the globe and certain individuals from above want erasure for some human experiences startled by violence and hate. So we, as faculty and scholars, need to expose students to different and difficult conversations, this is most important now more than ever.