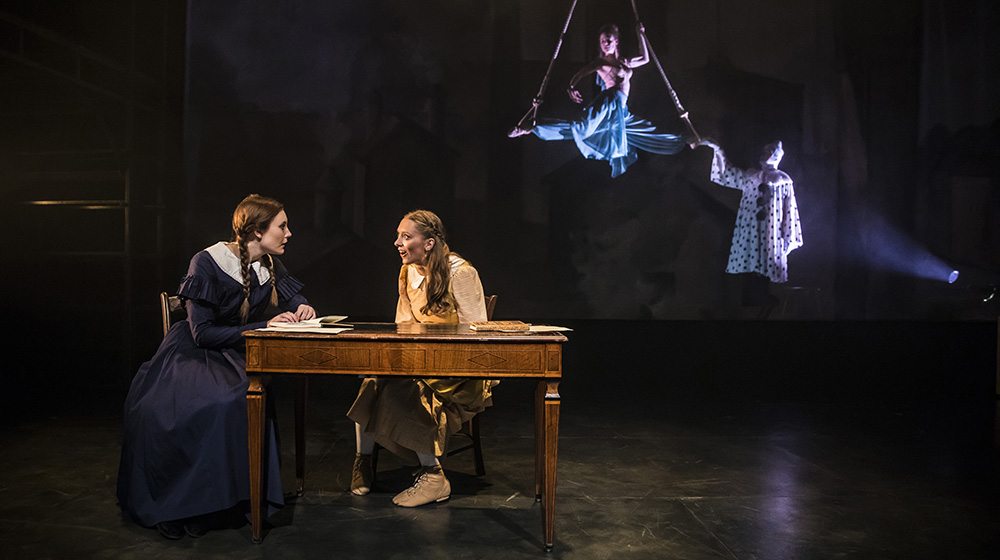 For Loyola senior Audrey Anderson, 22, playing Sissy in a rendition of Charles Dickens’ Hard Times at the Lookingglass Theatre Company was a dream come true. Born and raised in Minneapolis, Anderson has been acting and performing aerial acrobatics since the second grade. Anderson decided to pursue acting as a career during her junior year in high school, and has never looked back.

A theatre major, Anderson is used to juggling school work, hours of rehearsals, performances, and other curricular activities. But once she was cast in Hard Times, she took the semester off to dedicate her time to her first professional role in Chicago. She acted in all 114 shows over a span of about three months until the production wrapped up in mid-January. When writing about Anderson’s performance, the Chicago Tribune said, “[Anderson] gives one of the subtlest and most authentic performances” and the Chicago Sun-Times referred to her as an “utterly beguiling actress-aerialist.”

Anderson’s budding acting career has grown at Loyola. She has performed in a school production every semester, including being cast in columbinus, Elephant’s Graveyard, and FML: How Carson McCullers Saved My Life, among others. Now in her last semester, Anderson hopes to perform both on stage and in television and film.

Here, Anderson talks about her first professional theatre experience in Chicago, some of the challenges and triumphs, and how Loyola has influenced her professional career.

You just finished performing as Sissy in the Lookingglass Theatre Company’s version of Hard Times. What was that experience like?

I can’t even express how perfect of a first professional theatre experience in Chicago it was. It was a total whirlwind.

They work very collaboratively at the Lookingglass Theatre Company. Even though I was the youngest and least experienced person in the room, I felt like I had just as much of a say on contributing ideas, on being listened to, on being valued in the room, so it was just a really positive experience.

What’s your background in acrobatics and aerial training?

I started aerials when I was in the second grade. My mom is a professional dancer. She’s had an amazing professional career, and now she’s a dance professor in Minnesota. I grew up going to rehearsals and sitting in theatres and dance studios while she was teaching.

When I was in the second grade, we went to see this theatre piece called Circus of Tales. They specialized in physical spectacle theatre, and in this piece there was circus and aerial arts in it and I can still see the show to this day. After the show, I turned to my mom and said, “that’s what I want to do.” She signed me up for classes the next week, and the rest is history.

It was really intense because I shattered my wrist at the beginning of the summer. I was cast in the show in February 2017, then that June I fell on my wrist while biking and completely shattered it. I had to have surgery and started physical therapy right away. At the beginning of the summer I didn’t know if I was going to be able to do the show. It was cutting it really close. My wrist was fine, but I hadn’t done aerials for three months so I started below zero in terms of strength and stamina from where I needed to be.

The rehearsal process was three weeks long. We rehearsed six days a week, and we were there all day, every day. It was hard coming into rehearsal every day and not being where I wanted to be strength-wise because you can’t think about performing, or what you’re giving to an audience—you really can’t think about all of these beautiful finessing qualities.

They just kept working me. And by opening night I was able to do it. I did 114 shows and my understudy never had to go on, so it worked out.

Let’s switch gears and talk about your experiences at Loyola. How has Loyola impacted your professional career?

Attending Loyola has really impacted me as a person and my career. If I weren’t in Chicago, I wouldn’t have been connected with Lookingglass Theatre Company. Loyola has really taught me how to be an active member of a rehearsal room and how to be explorative, willing, and giving in a rehearsal space so people will want to work with you. The theatre program wants you to be that active member of the rehearsal room and as a Bachelor of Arts student, we take all these different classes—design, practicum, etc.—so we’re given all of these facets of knowledge, not to mention all the liberal arts classes I have to take. How could learning about all of these different philosophies and historical times, learning about psychology, how is that not going to help me as an actor?

We didn’t spend a lot of time talking about the time period of Hard Times, but I could piece together my own information about it because I’ve taken history classes at Loyola.

How did you decide to take a break from school last semester?

There was no way I was turning down the role. I knew from the second I was cast that I was going to take a break regardless of what that meant. It meant so much for me to get a start on my career—to work with this company and to get out in the world. And it just happened to work out really well that I only had credits for one semester left anyway so I was really lucky.

What was it like returning to campus? Do you see school in a different light now that you’ve been in the professional world?

It feels kind of like Hard Times was a dream, like “did I just do that for three months?” It’s weird that I’m back in the swing of things now.

I think I see the need for school and I now appreciate it more. When you’re in the thick of college and it’s hard, you’re like, “Why am I putting myself through this stress and staying up all night [with] no sleep and living on coffee?” Now I understand why we train so hard. I wouldn’t have been able to keep up in the rehearsal room if I hadn’t had my training here. In acting classes, I’m learning how to do what I want to do, but I don’t think you really understand why you need it until you’re out in the real world.

What is it about acting and performing that you love so much?

Being in a rehearsal room is thrilling in itself. You get to be in a collaborative, artistic, and fun environment that’s sizzling with everything—energy, different minds. I don’t know what other environment could make me feel as energized in all of these different ways as being in a rehearsal room does. It’s a very rewarding field to go into because of this constant self-growth. Coming in to rehearse a scene and having it just be words on a page and then creating this beautiful piece of art that’s hopefully saying something—that’s really satisfying.