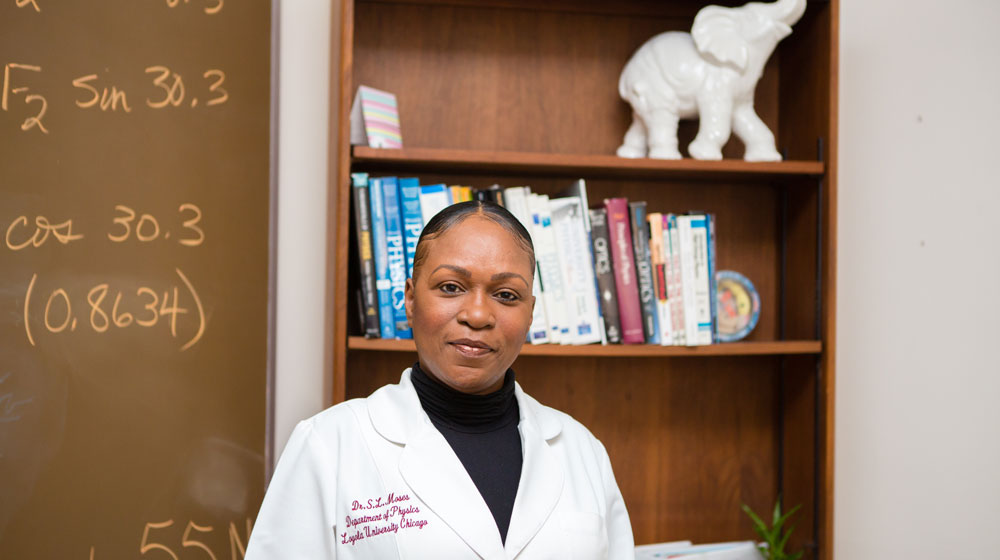 For Sherita Moses, PhD, the battle against breast cancer is deeply personal.

The breast cancer death rate is 42 percent higher in blacks than in whites, according to a 2016 article in the Cancer Journal for Clinicians. And black women are disproportionately diagnosed with triple-negative breast cancers.

This awareness and first-hand experience drove Moses, who is a lecturer in Physics at Loyola, to look for a cure. Just weeks ago, she got one step closer to her wish: She received official patent paperwork for a compound she invented that could potentially save the lives of hundreds of thousands of women who suffer from triple-negative breast cancer—a dangerously aggressive form of cancer.

“I screamed when I got the call. I was in shock that the U.S. Patent Office would approve it,” she said.

This invasive form of breast cancer identifies women whose breast cancer cells don’t contain receptors for estrogen, progesterone, or HER2, and can’t be treated with hormone therapies or medications that work by blocking HER2. It has, however, been treated with other drugs, such as chemotherapy and radiation therapy. These drugs, Moses said, have horrible side effects, and most often do not work on patients afflicted with triple-negative breast cancer.

Something needed to be done, and Moses was determined to find a treatment when she started this research about three years ago while at Alabama A&M University (AAMU). And along the way, AAMU colleagues Vernessa M. Edwards, PhD; Chance M. Glenn, Sr., PhD; and Angela Debro, Esq. lent their support and expertise to Moses’ research. She soon received more than $100,000 in funding from the National Science Foundation and an Alabama Experimental Program to Stimulate Competitive Research (EPSCoR) research grant and set to work.

Moses had certain compounds tested at the Loma Linda Breast Cancer Laboratory in California and she soon discovered that gold nanoparticles—tiny microscopic particles—combined with plant extracts could destroy cell lines with estrogen, progesterone, and HER-2 receptors. The process, she said, was even more effective in killing triple-negative breast cancer cells without damaging healthy cells.

Her compound is especially remarkable because it holds both analgesic and anti-inflammatory properties which can drastically reduce the pain caused by cancer. Such traits are lacking in most breast cancer drugs, Moses said.

Right now, with the patent in hand, Moses’ goal is to see a pharmaceutical manufacturer buy the compound and conduct clinical trials. Then, hopefully, it will make it to the consumer, patient market so breast cancer patients can be treated.

“I wanted to help save lives without all of the pain and suffering patients go through,” said Moses.