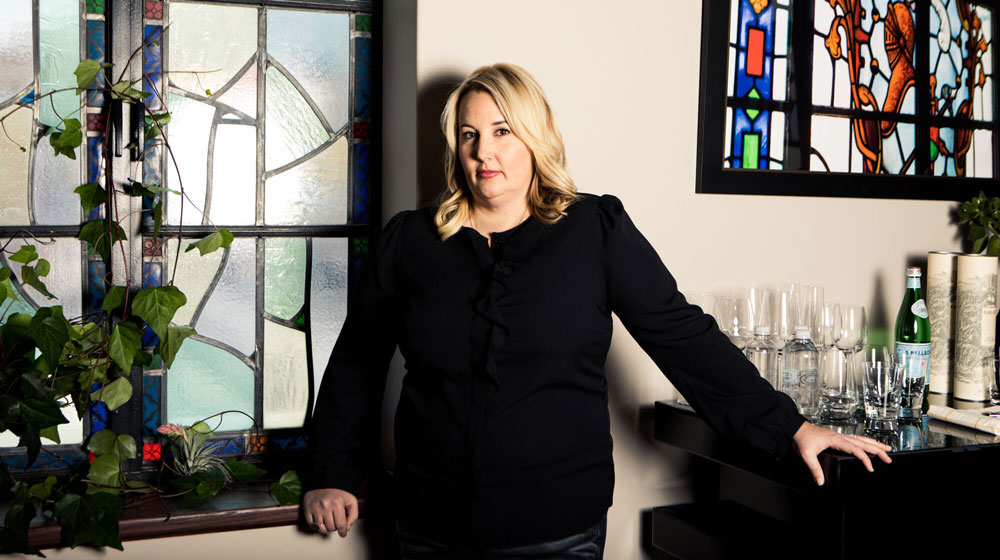 CAS alumna Britt Whitfield's event management business is booming. The Revel Group has been named one of the top 5,000 fastest-growing companies in INC. magazine for the last five years and, most recently, she made Crain’s Chicago Business Top 40 under 40 for 2017.

Celebrations, get-togethers, and parties—all bring people together and can be the framework for building and strengthening communities. Psychology and Social Science alumna Britt Whitfield (BA ’04) knows this and literally embodies the phrase “Life of the party.” But, she is serious and all business when it comes to running The Revel Group, an independent, event-centric marketing and production businesses based in Chicago. Whitfield, who serves as CEO and co-founder, is celebrating the company’s 10th anniversary this year.

Under her leadership, the company’s stellar work has been lauded numerously. For the last five years, Revel has been in INC. magazine as one of the top 5,000 fastest-growing companies. Chicago Business Journal named Whitfield a Women on the Move last year and, most recently, she made Crain’s Chicago Business Top 40 under 40 for 2017.

Is there an experience you can point to that illustrates how you came into your own as a leader?
I started working out of a deli in Philadelphia when I was 19. I worked in the kitchen, on the line. I had no culinary background. I made sandwiches and I remember thinking I wanted to put so much meat on the sandwich, though they gave you scale to weigh it out. I always doubled it or went over so they ended up putting me on the cash register. I wanted people to open [their sandwich], look at it, and say, “This is the best sandwich I ever got.” That’s all I cared about.

I ended up becoming a manager at Smith & Hawken. I was so opinionated and bossy. I could take charge. I’ve always had that ability to kind of move the car with the group.

What do you attribute the success of your business to?
I think the relationships: From the people who are our clients, the corporations, and also those who make up Revel. I think those bonds are the key to our longevity. Longevity is such a hard thing in business. We are such a different company than when we first started yet we are still the same—our culture, what we care about, the fact that we want to put out something really good. And how we’re able to be creative, particularly in how the company is set up and the different groups. And we aren’t just one company with additional services: We’re separate companies that are vertically integrated and creativity grows from that. That model was not based on a financial component. It was based on how we were going to supply something and what demands we’re going to meet and how well we’d meet them. And I really think that’s what’s done it. We really care about designing an event and when we’re hired to put something on, we know the buck stops with us. With that responsibility, we added these companies because we just wanted to be that sure and that good. And we wanted the events to be what we had promised and what we had wanted.

When did you realize that you had an affinity for event planning?
I started working during my senior year in Loyola at Cullen's Bar and Grill in Wrigleyville. And then Michael Cullen, who has since passed, opened Blue Bayou across the street, which had an event space. I was a manager and I bartended at the time but I wanted to be responsible for booking that space.

While I’m working there, my mother went to a party at Soldier Field for Maggie Daley’s organization, After School Matters. There are 2,000 people and caterers on the field, a big band, a light show. The whole bit. I comment to her on how I liked booking these events much more than I liked the restaurant business. I liked hospitality but I knew I wanted to sell something. She tells me about this party and I said to her, “Wait, there are parties like that?” And I’m 21 years old and I told her that’s exactly what I want to do.

Last year, what was the best party you went to or that your company put on?
You know we throw a lot of good parties. We did 6,000 events last year. We did the Cubs’ World Series party... That was a once in a lifetime event. To be a Chicagoan and to be able to produce a Cubs World Series (party) that is OMG!!

But [we recently had] our 10-year Super Bowl party called Revel Bowl. We usually base the event off of the half-time event but we felt … it should be a Prince party. So, there was a lot of Purple Rain and we had a Prince tribute band. It was incredible. Because the way this Super Bowl tied into Prince the excitement came from the fact that what we ended up choosing something that worked. It was also nice to celebrate. That was actually a pretty big milestone—a decade of a company. That was definitely on top of my list.

Finally, what makes for a good party?
The number one thing for a good party is being comfortable. I think it’s a very challenging thing to achieve. It’s a combination of how you’re greeted, the look, the seating, the attitude of every staff person. All of that trickles down. If you can go into it and everyone is positive about being there, people will be comfortable. Think about when you’re not comfortable at a party, how bad does that feel? When you show up to events and you ask yourself, “Why am I uncomfortable?” You might say to yourself, “No one said hi to me. Who am I meeting here?” People want it to be the lights, the stage—it’s none of that. Overall it’s whether people feel good there and are they comfortable.