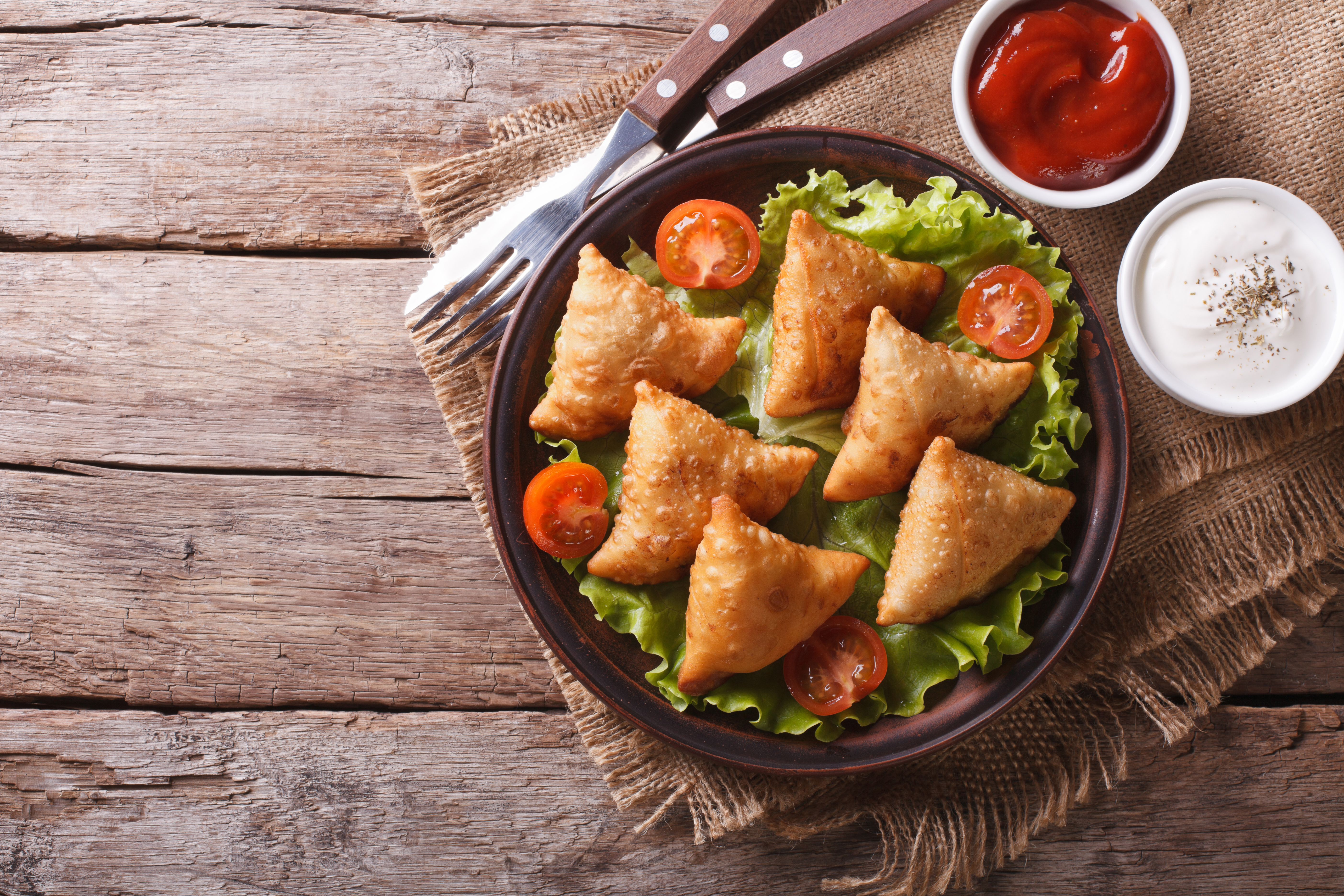 Cognitive and Behavioral Neuroscience majors Rohini Maddigunta and Maria Merchant came up with healthy recipes to combat diabetes in the South Asian community. One signature dish—a traditional samosa (stuffed pastry) recipe as seen above—they turned into a low-card delicacy. It uses dough made out of cheese and almond flour. Then that dough is stuffed with fresh vegetables and is baked instead of fried which reduces calories and bad fats. From these four simple substitutions, you cut the amount of calories in one serving by half, but still use the same spices and retain the same great taste!

Rising sophomores Maria Merchant and Rohini Maddigunta, who identify as South Asian, know all too well about the effects of diabetes. Both have relatives who have long suffered from type 2 diabetes. Worldwide, 246 million people live with the disease. Of that, South Asians have both the largest number of cases and the fastest growing prevalence, according to a recent Diabetes/Metabolism Research and Review article. Because of this statistic and their personal experience, Merchant and Maddigunta spent this summer researching a type 2 diabetes treatment option: diet plans.

What were your key finding in your research on type 2 diabetes this summer?

Maddigunta: We had a chart (in our poster presentation) of different South Asian countries that shows India has the highest percentage of its population with diabetes—9 percent. That’s just India alone. So if you combine that with the rest of South Asia, that’s a high percentage. We found that the reason this population has such a high prevalence of diabetes is because of their diet. The foods they eat are so oily. Also, they don’t have proper information to manage diabetes or diagnose diabetes. Some people go on with their lives and don’t know until they reach the last stages of the disease or when it get really severe. There’s multiple reasons why but it’s mainly diet and lack of education.

Merhant: Lifestyle is also a factor. We found that many didn’t make health a priority, particularly in that region of the world. In America, you think about having a healthy lifestyle and working out every day. Over there, you have to do housework, take care of your kids–other things are a much bigger priority.

And, how did you apply your research findings?

Merchant: Under the guidance of Laurie Jordan, senior lecturer in mathematics and statistics, we tried to figure out a diet plan that also helps with culture and religious standards so they could stick to it. Also to live a better, healthier lifestyle.

Maddigunta: Then, we created a website to get this information out to the public. It’s not live because we still need to collaborate more with a nutritionist, but it was our way to give access to the information. We’re sharing a personalized diet plan that will allow people to formulate their own meal plan based on their personal needs.

You aren’t dieticians, so how did you develop these healthier diet plans?

Merchant: I got the idea for creating a meal plan after my mosque did a program where they invited a dietician to come and discuss healthier eating habits, especially because in our culture we eat a lot of oily, high fat foods. They handed out booklets and showed us substitutes for our foods which helped us—we based our meal plans off those recipes. I gave these a try because I have parents who tried to go on a diet and it didn’t work. They got bored because it’s not their cultural foods. So we tried to create a diet that was more aligned with their culture so they’d stick to it.

What impact do you think this will have on the South Asian community?

Merchant: I think if we advocate for it in the right way then people we will be able to understand that it’s not as hard as it looks and be able to substitute one ingredient for the other. People will still be able to enjoy all the great Indian, South Asian foods.

Both of you are Cognitive and Behavioral Neuroscience majors. How has Loyola prepared you for your field?

Merchant: Through the classes in general. The rigorousness and competitiveness of Loyola helps you push forward. I have the freedom of discovery here. For example in Bio 101, you learn about insulin, you learn about other biological factors that contribute to diabetes. I brought that information to my mosque where I worked at a diabetes clinic. I was able to explain to congregants there how diabetes works. You can find so many possibilities at Loyola. This has encouraged me to do something different and be a part of making that change.

How has this experience at Loyola helped shape you as a person?

Maddigunta: It’s made me more aware of my own lifestyle. It’s helped me care more about my health and immerse myself more in my culture. So researching has helped me connect and go back to my roots to discover something new I didn’t have in my life–particularly within Hindu culture, the foods we eat and how we practice.

How does your research fit into Loyola’s mission?

Maddigunta: Part of Loyola’s mission is about helping people and reaching out to people who are in need of aid.  And this research fits into that. I feel like we could easily branch into another community and use this research to help others.

Merchant: With the social justice aspect of Loyola, we’re able to give back. By raising awareness, we can help one person change their diet to live better and have a healthier life. That’s part of Loyola’s mission.