History professor's "Midnight Bike Ride" brings the past to life 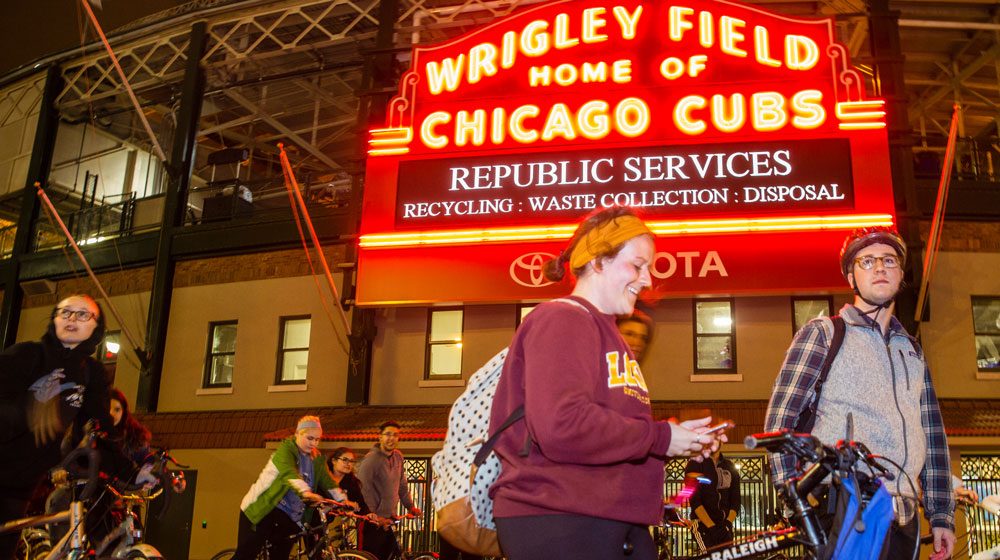 Loyola student Reed Redmond (flannel shirt) and others stop under the iconic Wrigley Field sign during a "midnight bike ride" tour highlighting historic sites in Chicago. The annual tour is led by Loyola History Professor Timothy Gilfoyle who has conducted the event, which is open to his students and extended to faculty, staff, and friends, since 1989. (Photo: Natalie Battaglia)

History Professor Timothy Gilfoyle doesn’t limit his lessons to within the walls of the classroom. In his 29 years at Loyola, Gilfoyle has consistently hosted his Midnight Bike Ride to teach students about history in a fun, participative way.

“There is a lot of history all around us that most residents are largely ignorant about,” said Gilfoyle.  “The midnight bike ride is a vehicle that allows me to teach not just urban history or the history of Chicago but also U.S. history.”

Beginning at Loyola’s Lake Shore Campus and extending as far as Chinatown, participating students stop at numerous historical sites along the ride. Gilfoyle typically takes his students to visit locations such as the Bloomingdale Trail, Carl Sandburg’s home, the Finkl Steel Mill, the site of the Haymarket Incident, and more.

This year’s Midnight Bike Ride began on Thursday, April 20, around 9 p.m., and students returned to campus around 7 a.m. the following morning after stopping for breakfast and watching the sunrise.

The ride takes place throughout the night to avoid the hectic Chicago traffic during the morning and evening rush hours. Gilfoyle believes that seeing parts of the city devoid of the typical crowds allows students to have a different perspective. Even though, as Gilfoyle said, “History is all around us,” many students don’t take the time to explore the historical aspects of the city.

Senior creative writing major Reed Redmond decided to participate in the overnight ride after hearing a lot about it from his classmates. Redmond had a hard time deciding which site was his favorite, but he really enjoyed learning about the churches around Chicago because they opened his eyes to a different aspect of a bustling city.

“This bike ride showed me how much I'm missing when I go from one place to another without exploring what's in between,” he said, “I also learned that my professor is in much better shape than I am.”

Some of the historical sites in the 2017 ride included Wrigley Field, Goose Island Brewery, Hull House, and Berger Park.

“My favorite historical site that we visited was Goose Island Brewery. We got to tour the brewery at 1 a.m., and it was a very interesting experience,” said freshman Maggie White, who is majoring in history and secondary education. “On the ride, I discovered hidden places that I never knew existed and saw the sun rise for the first time.” White said the long distance of the bike ride was the most challenging part of the evening.

Although the bike ride is demanding, as participants can attest, Gilfoyle wholeheartedly believes it’s worth sacrificing an evening to delve into history in a way that’s different than simply reading a textbook.

“Without a vivid link to the past, the present is chaos and the future is unreadable,” Gilfoyle said. “The bike ride is a way that I can explain history, make connections, and enlighten students as to how the physical world around them has an impact on their contemporary life.”