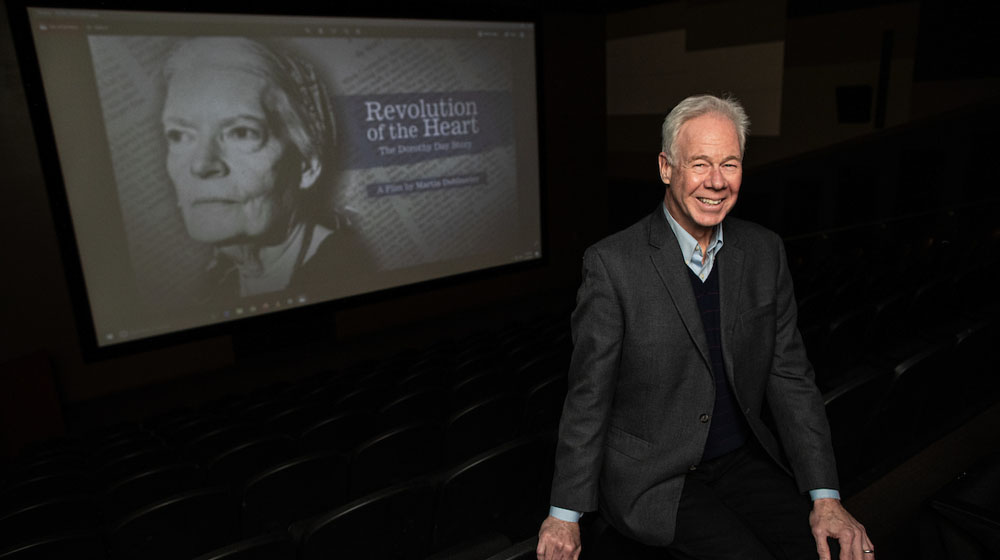 Martin Doblmeier, director of a new documentary "Revolution of the Heart: The Dorothy Day Story." The film traces Day's journey from a young communist journalist, to a Catholic convert, to the co-founder of The Catholic Worker newspaper and the first "houses of hospitality," which sheltered New York City's homeless during the Great Depression.

Of Faith and Heart: A Look At Dorothy Day

How the journalist-turned-social crusader infused the world with love

Writer. Activist. Philosopher. Inspiration. These are all words that can be used to describe Dorothy Day, a woman who devoted her life to improving the lives of others. In 1933, Day founded the Catholic Worker Movement with Peter Maurin, a French peasant and pacifist. Throughout her lifetime she fought for the rights of disenfranchised people.

Martin Doblmeier, who directed a new documentary about Day’s life, saw how determined Day was to live her faith without compromise. In fact, Doblmeier said even though she’s not alive today, she remains both an awe-inspiring and intimidating figure to him.

“Even from the grave, she haunts me to think: Do I actually live my faith with the same intensity and total non-compromising commitment that she did?” said Doblmeier, whose film, Revolution of the Heart: The Dorothy Day Story recently screened at Loyola University Chicago.

Martin Tomszak, professor of theology and PhD candidate, is a Dorothy Day and Catholic Worker Movement scholar. He said Day started out her career as a journalist after receiving an education at the University of Illinois and she believed theory and praxis should not be separate entities, but must reflect one another.

“She pursued her passion of journalism in New York, while also marrying it with a passion for—what some would describe as—leftist politics,” Tomszak said.

Yet her radical ideas and desire for change landed her in trouble at times. In 1917, she was arrested for protesting in front of the White House, agitating for women’s suffrage. Day eventually met Maurin, which changed both of their lives forever, according to Tomszak. Around the same time, Day had converted to Catholicism and adopted the faith to amplify her idea of “flourishing humanity.” This notion of flourishing would later come to life through the Catholic Worker Movement. Maurin brought with him some knowledge of French personalist philosophy, which states that humans should live their lives for the other and that the self should always come second to the other.

“It was a direct rejection of enlightenment ideals like ‘I think, therefore I am.’ One might be able to categorize it as ‘I love, therefore I am,’” said Tomszak. Day took this philosophy from the academic world and put it into practice through her and Maurin’s movement.

One facet of the movement included Houses of Hospitality, which provided shelter and community for impoverished Catholic people. Another was the Catholic Worker Newspaper, which was published within the Houses of Hospitality and provided information about the movement and the specific people involved. Tomszak said these institutions shared Day’s belief in implementing the ideology and teachings of Catholicism in the real world, similar to the work and philosophy of the Jesuits.

“The Jesuit and Catholic Worker ethos align in that they go out into the world and utilize the gospel message as a tool for growth. Being exposed to Dorothy’s ideas is vital, because in many ways we’ve forgotten how to love. Dorothy was someone who--very simply--loved others,” said Tomszak.