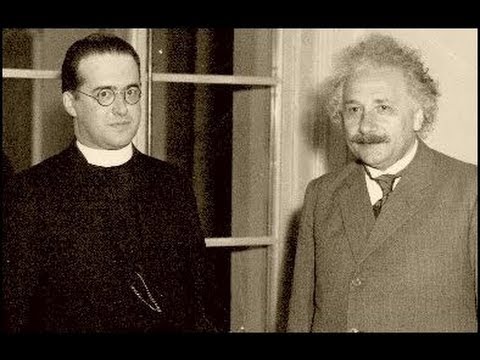 “Georges LeMaitre (1894-1966) showed that religion and science -- or at least physics -- did not have to be incompatible. LeMaitre, born in Belgium, was a monsignor in the Catholic church.

He was fascinated by physics and studied Einstein's laws of gravitation, published in 1915. He deduced that if Einstein's theory were true (and there had been good evidence for it since 1919), it meant the universe must be expanding. In 1927, the year he got his PhD from MIT, LeMaitre proposed this theory, in which he stated that the expanding universe was the same in all directions -- the same laws applied, and its composition was the same -- but it was not static. He had no data to prove this, so many scientists ignored it. (Another scientist, Soviet Aleksandr Friedmann, had come to the same conclusion independently, a few years earlier.) Even Einstein was reluctant to endorse this extension of his theory of general relativity.

In 1929 at the Mt. Wilson Observatory in California, Edwin Hubble discovered that galaxies were moving away at high speeds. He was, like most people, unaware of LeMaitre's 1927 theory. But LeMaitre used Hubble's dramatic discovery as evidence for his theory. It was easy. If you imagined the galaxies rushing away from us as a movie, just run the movie backwards. After a certain time, all those galaxies will rush together. LeMaitre put forth the idea that there was once a primordial atom which had contained all the matter in the universe.

The other support LeMaitre used was the idea of entropy, which states that everything is moving towards greater and greater disorder.

Others took notice and named his theory "big bang." LeMaitre's ideas opened more questions, many of which forced physics and astronomy together: What was that primordial atom like? Why would it explode? He pursued the topic for some time, even suggesting that there ought to be some form of background radiation in the universe, left over from the initial explosion of that primordial atom. He became more interested in the philosophical ramifications of his theory, which were many.

Others took up the big bang theory, and for several years there were strong debates between those supporting it and those who favored a "steady state" theory of the universe, in which the universe was eternal and unchanging. This argument ended when Arno Penzias and Robert Wilson found evidence of cosmic background radiation, which LeMaitre and other theorists had determined would be the residue of the big bang's explosion many billions of years ago.”