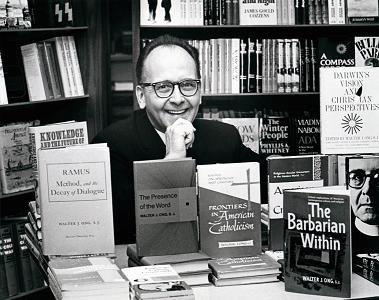 Priest of the
Society of Jesus
Born in
Kansas City, Missouri
1912-2003

As our Fall 2017 semester comes to a close, we'd like to feature a Catholic intellectual for you to consider and learn about over your holiday break. Our recommendation is Fr. Walter J. Ong. Fr. Ong grew up in a Protestant-Catholic family in Kansas City, Missouri. He attended Rockhurst College and graduated with a Bachelor of Arts degree in Latin. After graduation, he worked in publishing before entering the Society of Jesus in 1935. Fr. Ong went on to earn a master's degree in English from Saint Louis University. In 1946, he was ordained a Roman Catholic priest.

In his works, Fr. Ong's main focus is the impact the shift from orality to literacy has had on culture and education. Looking at his works through a 21st century lens shows how ahead of his time he was and how impactful the development of technology is on how people think and act.

Saint Louis University's Center for Digital Humanities is named after him and exists to further his research by "finding solutions to questions arising from the unique character of the digital environment". While Fr. Ong's research was primarily focused on orality and literacy, and the digital world we live in today is far different than the world he lived in, Fr. Ong's research and insights are still relevant to issues society faces today. Surely, we should follow in Fr. Ong's footsteps and consider if the internet, and our digital age, is affecting how we think, communicate and act.