Major Minor of the Month- January 2014 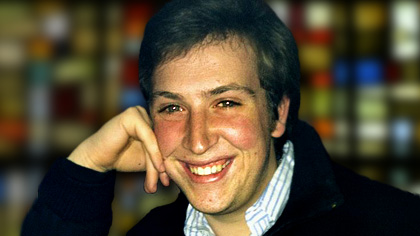 Favorite Saint: Saint Juan Diego. I have a special affection for Our Lady of Guadalupe, but the importance of the appearance of Our Lady is that she came to a poor Mexican native who followed her instructions exactly. This faith in Our Lady is what allowed Juan Diego to present her image on his tilma. I love this beautiful image of the Virgin because Juan Diego put his trust in her.

Favorite spot on Loyola’s campus to spend time: The IC. I love seeing everyone there at night! I often get little studying done there, but it is totally worth it. I will never study on the third floor though…way too silent for me.

Career Goals and Aspirations: I would like to work in the educational field in some capacity. This may look like either teaching or working in university administration. I have a major affection for the Catholic school system, so I would love to end up in a Catholic university as a professor or administrator. I can’t get enough of that Catholic imagination it would seem.

Any Body Piercings or Tattoos: Nope, I probably won’t. But some divine inspiration might change my opinion.

Crazy fad went through in the past: I majorly went through the Razor Scooter fad in my neighborhood. We would all zip around to each other’s houses, school, and even in people’s homes.

Favorite Catholic Author: Thomas Merton. His book, Seven Storey Mountain , really hit home with me. Asking many of life’s big questions allowed Merton to get the answers he was looking for. This experience has been similar to mine. Plus, at my home parish, our pastor has a dog named Merton and I used to walk him occasionally.

Best Catholic Studies class taken at Loyola: Sacraments and All Things Ignatian. Sacraments allowed me to see the physical side of the Catholic Imagination which I had not considered before. Plus, it showed me that Catholicism has a much deeper history when looking at art, literature, and liturgy. All Things Ignatian showed me how we can take Catholic Studies and see it in the light of Ignatian spirituality and Jesuit tradition. This is important to me because of the relation they both have with the mission of Loyola.

Favorite Service Experience: Project Merry Christmas with Loyola Christian Life Communities. I have attended this canned food drive each year, and love being with my CLC friends. Spending each week in prayer as a small group and living out that faith through service was such a positive experience. It was also the first time I had Dunkin Donuts hot chocolate, which is delicious.

Pet Peeve: When people open the microwave while it is running and then leave the numbers up by not pressing “clear”. I can’t see the time then because all it says is “00:17” seconds. Press clear people, or wait til it’s done cooking…jeez.

What the World Needs Now? Two Words: Pope Francis. I had the good fortune of studying in Rome during the resignation of Pope Benedict XVI, the papal conclave, and the election of Pope Francis. I stood in Saint Peter’s Square for seven hours waiting for smoke, I prayed it wasn’t black smoke, but white smoke came billowing out of the chimney. The energy in the square was something I cannot even describe. The Spirit was permeating the area, and it didn’t come from the smoke, but the excitement and hope of those present. When Pope Francis appeared on the balcony, bowed, and asked all of us to pray for him, the world went silent. There was a humility and peace that radiated from this simple man, a man who virtually no one knew. These small gestures are exactly what our individualized and egotistical world needs. It is what I need as a young-adult Catholic in 2013. Francis is engaging the Church and world in what is perceived to be a new tone. The reality to me is that Pope Francis is trying to follow the teachings of Christ—trying to follow the Gospel—as closely as he can. He calls humanity to care for the poor, he practices what he preaches, and he challenges the political structures of our age. He is someone that I look up to because he is a true model of holiness. The Holy Spirit was ever-present in Saint Peter’s Square that Roman evening, but since then, it has enflamed the world by the message and example of Pope Francis. Our Church and world needs a strong leader who consistently preaches and lives out the values of the Gospel while challenging us to do the same. Many college students know that Pope Francis’ twitter name is “Pontifex.” There is no doubt that I and many other young people will “Follow” Pontifex.