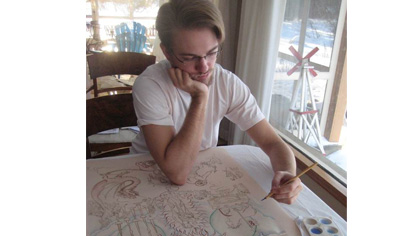 My first year I helped out at the food pantry of a nearby parish, St. Ignatius, and for the past two years I have been teaching catechism at another parish, Saint Jerome's. For three years I discerned priesthood at Saint Joseph's College Seminary here on campus. Finally, I’ve been involved in the Catholic Student Organization and its Men’s Group, and I work with the Hank Center for the Catholic Intellectual Heritage.

One time my friend Charlie and I ran down to swim in the lake on a brisk autumn night. We had been trying to figure out whether the water would be cooler or warmer than the air for our Weather & Climatology homework.

Since I’ve taken up organ, the choir loft in Madonna Della Strada. Otherwise, the many roofs of Mundelein.

Mister J's Dawg and Burger downtown on State and Pearson.

Professor or mentor who has impacted your life:

There have been quite a few. Penny Livermore is one of the kindest people I've ever met. It's her mission in life to make all her students joyful. My old spiritual director, the late Fr. Larry Maddock, is pulling for me before the throne of God now. He was a great help in my discernment here at Loyola.

Favorite Catholic Studies class so far and why: *

I'm very inspired by the Fathers and other early Christians. In addition, Radde-Gallwitz has a great quirky hard-to-catch theological sense of humor.

My name is Paul Louis Athanasius, and I especially try to stay in touch with those three.

Tolkien's passion for his work is rarely matched.

An experience that changed the way you think or live:

I really like the idea that prayer should change us, even if only a tiny bit each time.

If you could be omnipotent, omniscient, omnipresent, or omnibenevolent, which would it be?

There's no way I'm in the running for those.

Where can you imagine yourself in ten years?

I look forward to having a family and working as an artist in the Catholic tradition. I’ve been studying different forms and theories of art since high school, and after college I plan to apprentice myself to an oil painter in England to round out my training in fine art. The vision is "working in traditional styles for the renovation of culture by beauty." If you'd like to see what I'm up to right now, you can go like my facebook page ( facebook.com/byhandofPaul ).