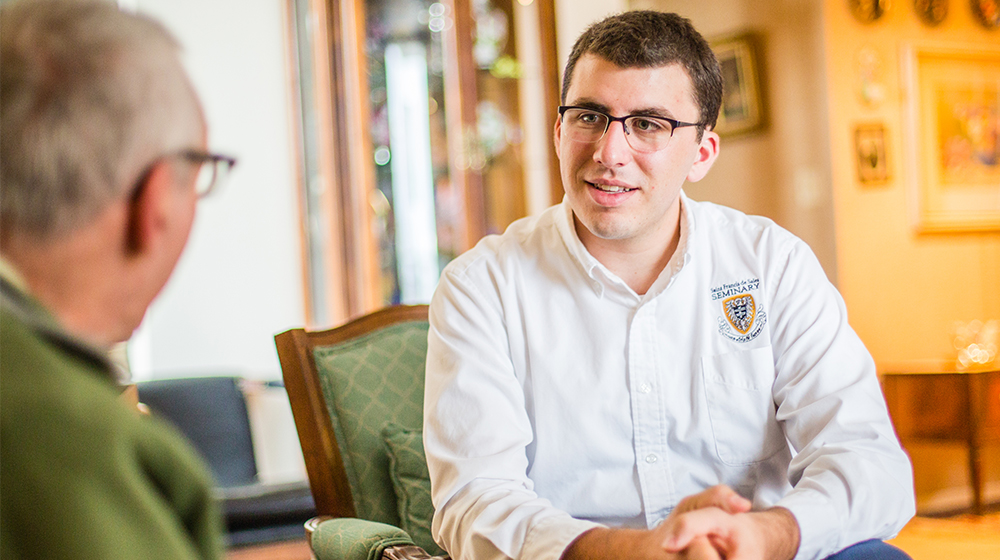 Why did you choose to become a CS Minor: I became a Catholic Studies minor because I was drawn to the minor’s focus on community, where many people come together to engage the Catholic intellectual tradition through its various expressions, and (hopefully) journey and grow together while doing so.

What is a fond memory you’ve had as a CS minor: Although I first read this question as “what is a food memory you’ve had”, a fond memory I’ve had as a Catholic Studies minor was the class retreat for All Things Ignatian (Cath 296).  Led by our two Jesuit professors, Frs. Jim Prehn and John Murphy, this retreat was a much-needed time to stop, step back, and encounter Ignatian discernment through films, prayer, and laughter.

Career Goals and Aspirations: Should the discernment continue to affirm the journey, I hope to be living and serving as a priest in the Archdiocese of Milwaukee.

Best Catholic Studies class taken at Loyola: I took a course entitled “Worship and Liturgy: Beauty and the Eucharist” with Sr. Ann Astell (the Chardin Fellow my junior year).  This class was significant for my prayer and formation, as in it, I was introduced to individuals like Simone Weil, Catherine of Sienna, and Pierre Teilhard de Chardin, S.J, for the first time.

Most important idea of all time: Leisure!

Most important invention: The printing press.

Central idea of Catholic thought that intrigues you: The Incarnation – the moment everything changed (and really continues to do so).  Sitting with the reality of the Incarnation is both

humbling, because I’ll never quite understand it, and really beautiful, because of Who it discloses.

Pet Peeve: Not picking up after yourself, especially in shared spaces (I live in a seminary community, so there might be a connection here...).

Favorite Food: Mom and Dad’s homemade pizza on the grill.

Favorite type of Music/ Favorite Song: Hard to choose. I’ve been listening to a lot of Josh Garrels (check out his album, Home) lately to prepare for his upcoming Chicago tour stop.

Any Body Piercings or Tattoos: Nope.

Crazy fad went through in the past: Sperry’s. Because nothing says an all-boy’s Jesuit high school like wearing these to class every day during spring semester of sophomore year…

If named the president of Loyola, what would you do as your first presidential act: Aside from making an effort to be present to students, I would transfer Loyola’s Mass of the Holy Spirit from Sunday evening to a weekday.  Moreover, I would cancel that day’s classes to encourage more people to come together and pray at this significant moment in the life of a Jesuit institution.

Most Delicious Item at Portillos: I’ve actually never been (I’m sure I just offended some of my friends from Chicago).

Guilty Pleasure: Eating only the tops of muffins (yes, I’m that guy…).

Something you couldn’t give up if you tried: Coffee.

Meet anyone past or present, who would it be?  Fr. Joseph Salzman (one of the first Catholic priests in Milwaukee).

If you could be omnipotent, omniscient, omnipresent, or omnibenevolent, which would it be? If I had to separate the four from one another, living as an omniscient human would be incredibly useful.