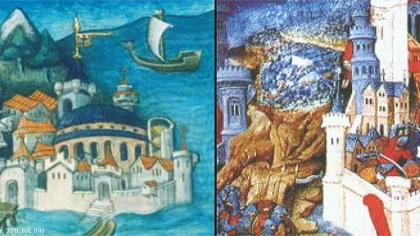 Back in 1895 and in 1898 Otto Guenther published, in two volumes, his modern edition of the Collectio Avellana – a compilation of 244 imperial, papal, and senatorial letters and documents.1 The earliest piece is a rescript of Valentinian I, dating to the year 368 (describing events in 367), the youngest a letter of Pope Vigilius to Justinian, written on the 14th of May 553 AD. The name “Avellana” was given to it by the Ballerini brothers, after a Vatican manuscript, Vaticanus 4961, which was once held in the library of the monastery of Santa Croce, in Fonte Avellana, Umbria. At first sight it appears as an unorganized heap of texts that apparently have only one thing in common – the majority of these documents are preserved only here. Only very few of the texts have parallels elsewhere.

The Collectio Avellana has never been studied in a systematic way before. This was a new research project, which consisted of several parallel routes, amongst which a monograph; a text edition, an English translation of all the 244 documents, accompanied by a historical commentary; and a series of conferences, to provide a platform for the countless issues attached to the Avellana. The first encounter has already taken place in Rome, 1-2 April 2011. Further sessions followed in April 2013, and in April 2015. The proceedings of these conferences were published.

All 244 documents gathered in the Collectio Avellana seem to be dealing with issues of schism and heresy, and the ways in which both imperial and papal authorities approached them. The principal goals of this project are to provide a systematic study of the Collectio Avellanaas a whole, as well as of individual documents, events, and characters, and to contribute to a better understanding of the history of both the Later Roman Empire and the Early Church.1