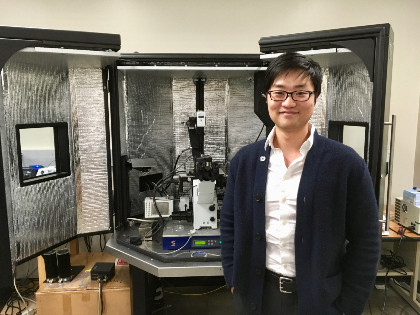 Hansol Lee (LUC Chem. BS ’15) at The University of Iowa standing in front of the Atomic Force Microscope.

One of the possible destinations of graduates from the Department of Chemistry & Biochemistry is continuing studies in Graduate School. After Graduating from Loyola in 2015 with a BA in Chemistry, Hansol Lee entered the Chemistry PhD program at The University of Iowa, where he is currently a 4th year Ph.D. graduate student. Hansol is in the group of Dr. Alexei Tivanski, and his research focus has been methodology development using atomic force microscopy, in order to characterize individual, submicrometer-sized sea spray aerosols particles that affect the climate and the environment. In addition, Hansol is a researcher at the National Science Foundation - Center for Aerosol Impacts on Chemistry of the Environment.

Hansol admits that, “it was not until the middle to late stages of my undergraduate career at Loyola, that I discovered research and science to be fun. When you are able take high-level chemistry courses, it opens you up to many diverse aspects of science. It was refreshing to learn in an environment, that had the complex interplay between physics, biology, and chemistry.” During his junior year, an appreciation of how physical chemistry can be used to explain many aspects of life began to develop. This catalyzed him to study purification and crystallization of gabR proteins to understand their mechanistic structures in Prof. Dali Liu’s lab along with then-graduate student Dr. Rui Wu.

Hansol explains that, “Loyola is an amazing place for undergraduate science students. The professors are very reachable, because the class size is small. I remember bugging my professors on countless number of questions! I was eager to know, and they were happy to talk to me about them.” Also, “the research teams rely much more on undergraduate students, and this results in being able to see, for the very first time for most people, what science really is about. It is not just about sitting down in a class and listening to a lecture. It has a dynamic process of learning, through trial-and-error, pushing the boundary of what is known and what is not. It’s much easier to get this glimpse at Loyola.” Finally, Hansol mentions that, “I had incredible peers and colleagues during my time. This institution seems to attract great people. It was a great mixture between competition, yet working together. I learned how to be a team-player, but also compete with some of the smartest people that I have seen.”

Hansol sees two roads after his Ph.D. career; post-doctoral academic position or law school to practice intellectual property. He admittedly has had multiple different career interests, but thanks to great mentors and peers, he was able to sample and eliminate several in order to get down to merely two choices.

This is an AFM image of a real, sea spray aerosol particle collected from Scripps coast of San Diego. The size was approximately 5 um across, so it’s a large particle. Normally, the composition of these particles is a mixture of NaCl + organic compounds, and you can see that prism structure of NaCl with the spread organic species around the particle. It looks splattered because it was impacted onto a surface, for imaging.