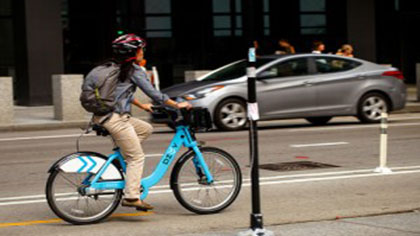 Students and neighbors are pining for Divvy Bicycle Stations in the neighborhood, and they let Chicago Department of Transportation (CDOT) know last month.

Representatives from Metro Strategies, Inc, consultants for Divvy and CDOT came to Loyola’s community holiday party at the Damen Student Center to gain feedback on locations for Divvy stations in December 2013. They returned in January to spend an afternoon talking to the student population.

More than 100 residents and students suggested site options during Divvy’s outreach, and 17 different stations were suggested. Divvy tallied most suggestions to CTA stations near campus, including the Loyola and Granville CTA Red Line stations.

Divvy is a new bike sharing system featuring thousands of bikes at hundreds of stations from Andersonville to Hyde Park, available 24/7, 365 days a year. Each station has a touchscreen kiosk, station map, and a docking system that releases bikes using a member key or ride code. You must be 16 years or older to ride Divvy.

Divvy has also recently re-launched the “suggest a station” feature on its website. The company currently has 300 stations across Chicago, but plans to add 175 this year. Help Divvy decide where to install new stations by suggesting a site in your neighborhood!