Ireland's Grand Opening is a Slam-Dunk 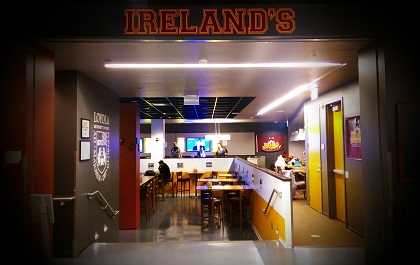 Located in the lower level of the Damen Student Center at 6511 N Sheridan Road, Ireland’s offers delicious food as well as beer and wine options for patrons over the age of 21.

The Ireland’s team hosted a VIP grand opening Thursday, November 13. The maroon and gold balloon arch framing the door way denounced that something exciting was awaiting guests inside. Nearly forty guests gathered to celebrate the opening of the newest business to join the Loyola Limited family.

As the evening commenced, words of gratitude were spoken by Max Timm, a senior student and president of Ireland’s. Wayne Magdziarz, vice president of Capital Planning, also spoke at the event congratulating the students for such a successful endeavor and launch. Additionally, Alderman Moore offered supportive words to the students and spoke about their professionalism and determination to make Ireland’s a reality.

The Ireland’s leadership team is comprised of Max Timm, president of Ireland’s; Alyssa Mauk, Finance; Brennen Regnier, vice president of Operations; and Anthony Paladino, Finance. All are scheduled to graduate in May, 2015.

Guests were invited to sample house-made menu items and hand-selected brews. Favorites were the specialty sandwiches and gourmet hot dogs.

The beverages on the menu include Shiner Bock, Bud-Lite, and Rambler IPA from Goose Island. Red and white wine round out the selections.

A student run bar on campus sounds controversial, but the Ireland’s team is taking every precaution to make sure that they maintain a safe environment in which responsible drinking is practiced and proper identification measures are taken very seriously. The following day Ireland’s opened publicly to all of the university and community in the fashion of a sports pep-rally that would have made George Ireland proud. The Ireland’s team is extremely pleased with the success of both openings and can only hope for the same sort of success moving forward.