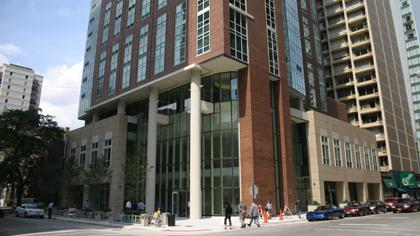 In late May, Power Construction began the demolition of buildings along State and Pearson Streets. The buildings included: the former Sally Beauty Supply, the former Chill Bar and Grill, and Alfredo’s Barbershop which relocated to Chicago and State. The Campus police have moved to 8 West Chicago Avenue, and the Copy Center and mailroom relocated to Baumhart Hall. The site is currently being graded to level the ground before excavation begins. The demolition phase is expected to be completed by September 1, 2013.

Beginning the first week of September, excavation and foundation work begins. The crew will begin laying out caissons and installing sheeting on the site which will take a month. A work trailer will also be brought to the site.

Structural work is scheduled to begin in October/November, 2013.

As part of Loyola’s efforts to improve safety, congestion and loading on Chestnut Street, Summur Roberts, Director, Community Relations, with the support of Aldermen Fioretti and Reilly, will convene a group consisting of City staff, the Greater North Michigan Avenue Association and local business/property owners on Chestnut to develop recommendations on street, alley, parking and loading improvements.

According to Roberts, “When Loyola went through the planned development process for Water Tower Campus, it became very evident that Chestnut Street needed some thoughtful planning to address infrastructure concerns on the street. As an anchor institution, the University is taking a leadership role in pulling together the key partners in making these changes happen. “

Stay tuned to Loyola Neighborhood News to remain updated on the projects as they move forward.