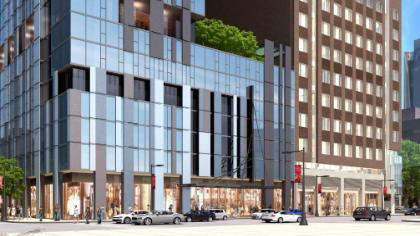 The final phase of demolition continues for the school of business.  At 14-16 E. Pearson, hand demolition moves forward in cooperation with the immediate neighbors. Structural demolition will happen in a few weeks and will be completed with great care due to the building’s proximity to the University’s adjacent neighbors. The busts that adorn the façades of 14-16 E. Pearson will also be removed by hand in a process called a “facadectomy.” Foundation analysis and underground review are in progress.

The Newcastle building has experienced some mechanical problems with the  with the drilling rig and it is not currently operating. Once it is repaired, drilling will resume. Due to the unforeseen mechanical failure, however, the construction team will need to work Saturdays for the month of October to remain on schedule.

Structural work is scheduled to begin in November, 2013. Sheet piling will begin at the Chestnut (north) end of the work site and move south.  The crew will push the sheets into the ground in an effort to minimize vibration.

Additionally, several measures have been taken to make the entire area safer during construction. The light behind 14-16 E. Pearson will be replaced with a brighter light in the next couple of days.  The Chicago Police Foot Patrol has been ticketing trucks double parked along Chestnut Street.

Stay tuned to Loyola Neighborhood News to remain updated on the projects as they move forward.