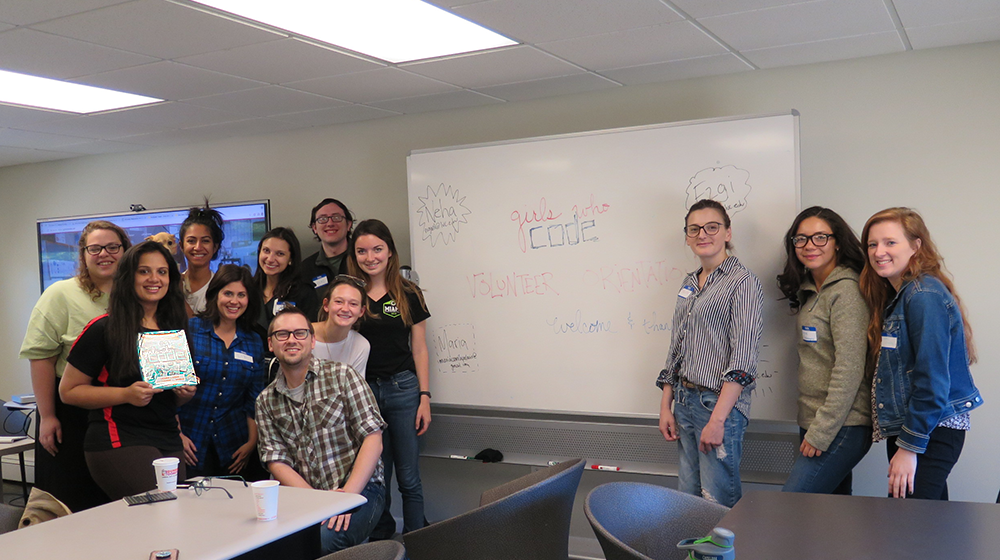 This autumn, CTSDH will launch a chapter of the national organization Girls Who Code (GWC) at Loyola University Chicago. GWC is a non-profit organization committed to closing the gender gap in technology by teaching girls in sixth through twelfth grade how to code. From its humble beginnings in New York City in 2010, the organization now has chapters in all fifty states and educates nearly 50,000 young women annually.

The idea to begin a chapter of GWC at Loyola came from Neha Goel, a graduate student in Computer Science and a CTSDH Graduate Fellow. Goel has long been interested in volunteering to teach students coding. When she was in high school, she noticed a significant gender gap in her classes and knew she wanted to do something to change it. “If we were taught coding like a language from early on, there would be no fear of coding,” says Goel. “I struggled a lot with coding until I was an undergraduate. I always wanted to teach young girls coding so that they could perform well in their undergraduate career and have coding as an option for their career.”

When Goel learned of a GWC chapter at the University of Illinois - Chicago, she offered to volunteer but they did not have any openings. Undeterred, she approached Liz Hopwood, CTSDH Project Manager and Instructor in Digital Humanities, about the possibility of starting a club. She found enthusiastic support from her fellow CTSDH Fellows, Maria Palacio Chrivri (MA ’17) and Ezgi Ilhan ’18. “The CTSDH played a major role in bringing GWC to Loyola,” Goel recalls. “One day last April we were discussing how the CTSDH could impact the community and I presented this idea. Dr.Hopwood, Dr. Roberts and the other CTSDH Fellows all were very excited about the possibility.” “CTSDH is thrilled to meet the newest generation of makers and builders. It’s so gratifying to work alongside ambitious, enthusiastic scholars like Neha, Maria, and Ezgi, who took it upon themselves to bring this chapter to Loyola,” says Liz Hopwood.

“Opening a chapter of Girls Who Code at Loyola aligns closely with the CTSDH’s objective to strengthen the university’s position as a leader in social justice through Digital Humanities approaches,” explains Dr. Kyle Roberts, Director of the Center. The club embraces Loyola’s spirit of community outreach and engagement by bringing Chicago Public School students from the surrounding neighborhoods to the heart of campus for free coding classes in the Information Commons on Saturday mornings during the term (classes will begin in October).

Support for this new initiative has come from across the Loyola community. The CTSDH agreed to organize the chapter and to staff it, with the support of the Computer Science Department. University Libraries generously made available space in the IC for the weekend classes. And a semester-long grant from Loyola’s Plan 2020 Student Innovation Fund has made it possible for the CTSDH to provide t-shirts, notebooks, and free lunches to club participants.

Learning how to code opens up a young girl’s interests not only in science and mathematics, but in virtually any discipline. “If a girl is interested in art, writing, or biology, she can create anything related to this using coding,” explains Goel. “This motivates girls to continue coding; it tells them that coding is not just about computer science, it doesn’t divert you from your interests.” This fall a number of young women will learn that first hand thanks to the vision of Neha Goel and Girls Who Code.

The fall session of Girls Who Code is ten weeks long and begins on October 7, running Saturday mornings from 10 am to 12 noon. There are also opportunities for student and faculty to be involved as instructors. No experience is necessary; full training will be provided. For more information, please email Neha Goel at ngoel@luc.edu.