8 moments that made 2019 an unforgettable year

A year on the campus of Loyola University Chicago is filled with thousands of tiny moments that can last a lifetime—moments of joy, discovery, victory, and excitement. From the anticipation students feel during Welcome Week to the triumph of commencement, every year has plenty of unique happenings, and 2019 was no exception.

This year we checked in on the students who have made quidditch a very real part of their college experience. We celebrated artists on the stage and in the dance studio. We met alumni who inspired us and who made us a little jealous of their game show success. And we shared too many stories to list about the incredible people who are part of the Loyola community.

While we can’t recount them all, here are eight memorable stories from 2019—and if you want to relive even more of the last 12 months, check out our gallery of the best photos of the year.

The Year in Photos: Relive some of our favorite moments on campus in 2019. 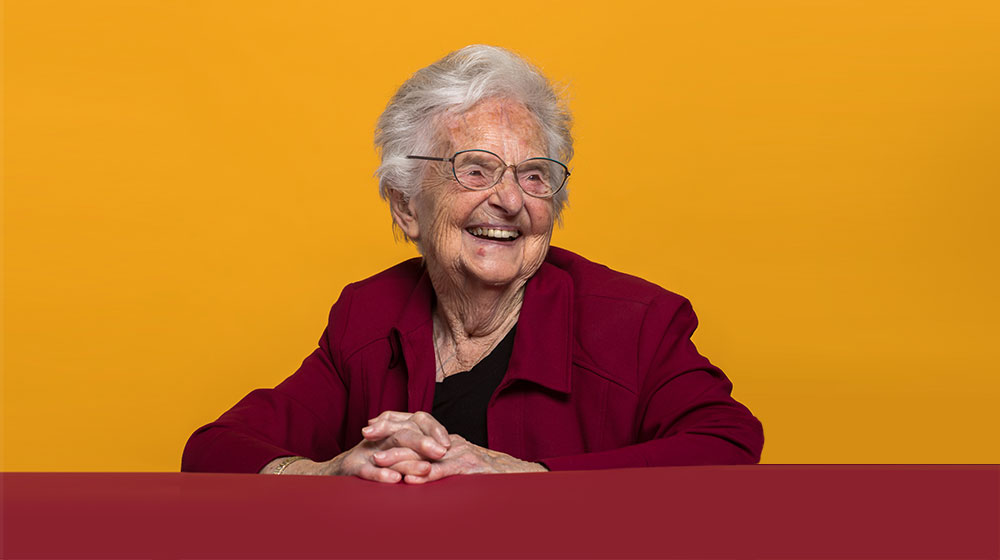 Flashing her unmistakable smile, Sister Jean approached her 100th birthday with the same joy she has brought to every day of the past century.

One thing we knew well before 2019 is that there is no one quite like Sister Jean. And we were pretty sure that her 100th birthday bash would be a celebration to remember.

The Damen Student Center was packed for the big event, with a crowd ranging from enthusiastic students to elected officials, including Illinois Governor J.B. Pritzker. As usual Sister Jean took it all in stride, giving credit to the students who make her feel young and to God for the life she’s been blessed to lead.

We helped to celebrate the milestone with a timeline of Sister Jean’s incredible life and a conversation about some of the moments that stick out most to her. The only question left is how to top the celebration next year. 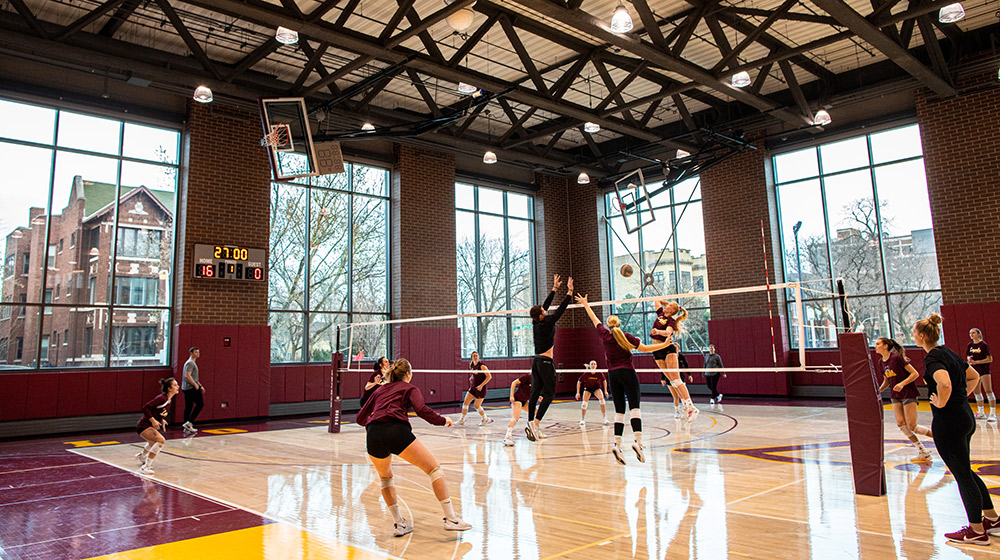 Loyola University Chicago's women's volleyball team got ready for action this season in the new Alfie Norville Practice Facility, which opened in August.

Loyola’s student athletes had been eagerly awaiting the opening of the Alfie Norville Practice Facility, a state-of-the-art space designed to enhance an already growing athletics program. The Alfie is named in honor of the late wife of Allan Norville (BS ’60), himself a Loyola Hall of Famer who averaged 13.7 points a game as a Rambler on the basketball court.

The ribbon was officially cut on the Alfie in late August, and the players wasted no time in getting down to business as the fall season kicked off. And what a season it was: The men’s and women’s soccer teams both captured MVC tournament titles and went on to their respective NCAA tournaments, women’s cross country earned the top spot in the conference, and women’s volleyball—with a beautiful new facility to practice in—had their best season in 16 years.

And if you ask most Rambler fans, this is only the beginning. 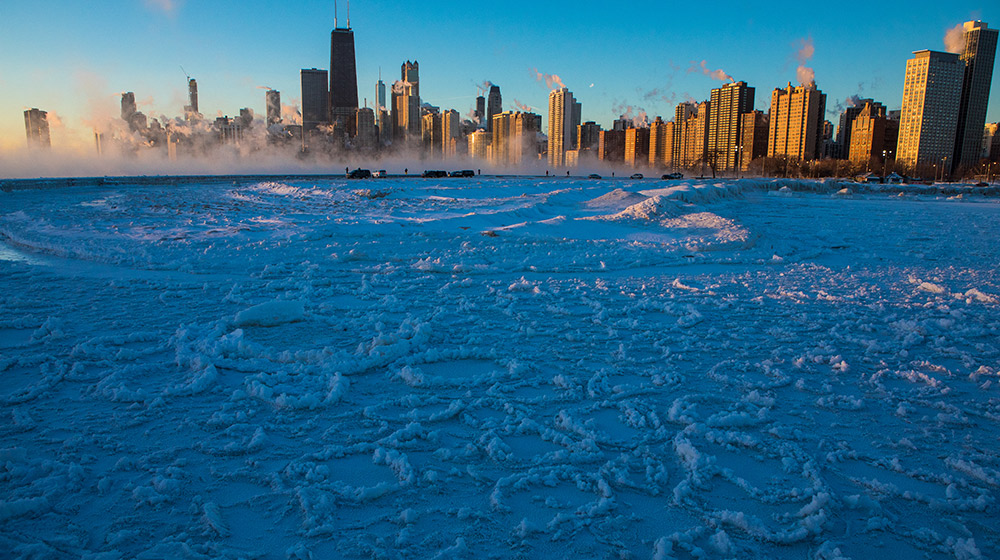 Temperatures at sunrise at North Avenue Beach in Chicago neared all-time record cold at -22, with windchills in the -50s, on January 31.

3. We survived the polar vortex

Hey, we all know Chicago is cold. But this winter it got really, really cold. Temperatures in late January dipped as low as -23 degrees Fahrenheit, among the lowest in Chicago’s recorded history. Businesses and schools across the city shut down and everyone was encouraged to stay inside as much as possible.

But why let cold weather get in the way of a good photo? That was the opinion of our University photographer Lukas Keapproth, who braved the elements in the hope of getting some unique shots of Chicago’s frozen sunrise. The images he captured, including the one above, were pretty astounding—and more importantly, he didn’t freeze in the process.

And thankfully for the rest of us, summer eventually arrived on campus. 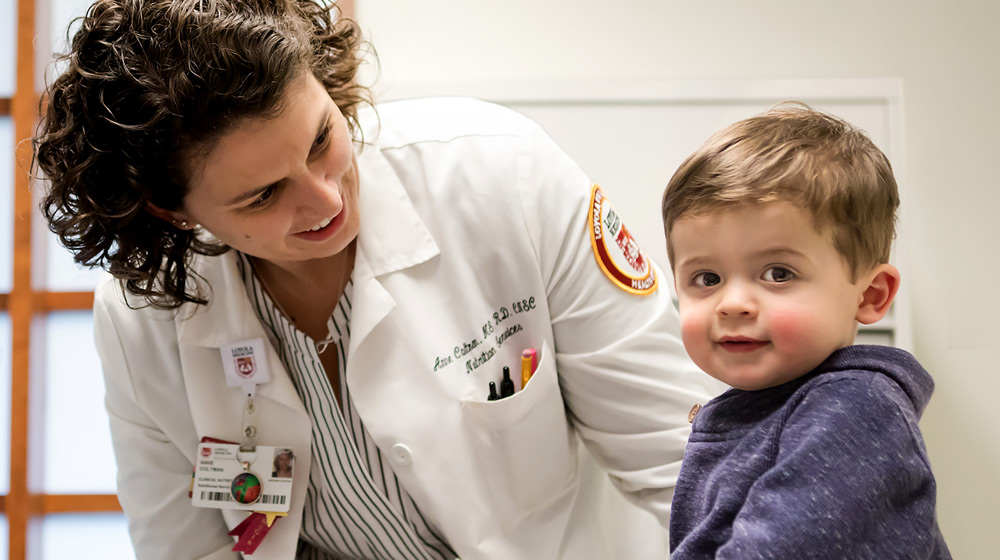 Loyola's new Parkinson School of Health Sciences and Public Health will help to increase collaboration among health care workers and prepare future professional for the growing field of jobs in health care.

Health care is a booming field, with jobs projected to grow 18 percent between 2016 and 2026, and someone needs to prepare the people who will fill those jobs. Enter Loyola's Parkinson School of Health Sciences and Public Health.

The new school, which offers degree programs in areas such as exercise science, dietetics, and health care administration, was announced early in 2019 and officially opened in the fall. Soon after, they named their first dean. But while the Parkinson School may be new, Loyola's commitment to the health sciences certainly isn't. Loyola's expert faculty, staff, and alumni are already looking at new ways to treat cancer, prevent heart disease, lower sugar intake, and improve mental health. 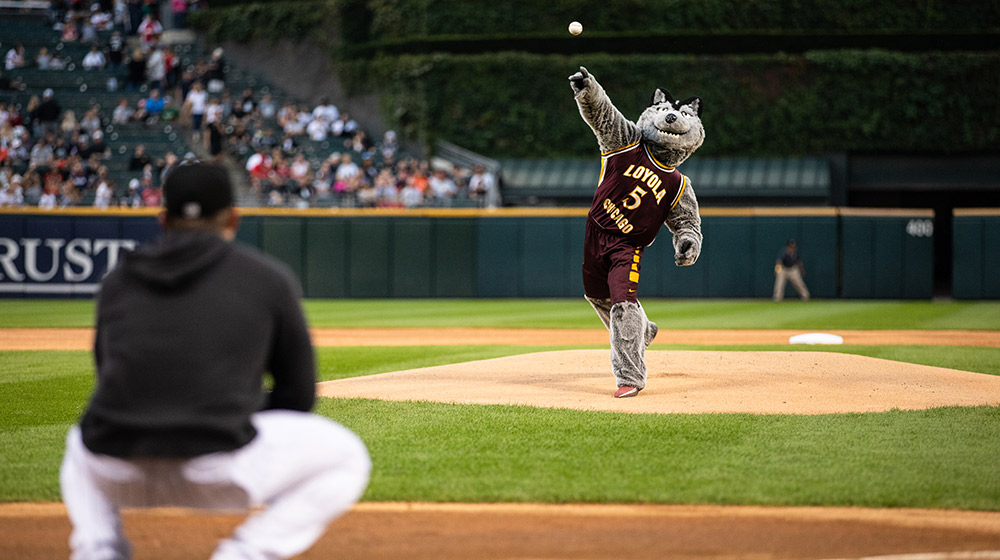 It’s a seemingly simple question that will get you a pretty passionate response from many Chicagoans: Cubs or Sox?

At Loyola, we opt not to take sides. The University has connections to both teams, with alumni like Caitlin Hanley and Lucas Luecke working behind the scenes for each ballclub.

This September, Loyolans traveled to the South Side to take in a game at Guaranteed Rate Field when the White Sox hosted Loyola Night, where Lu Wolf took the mound to throw out the first pitch. Just a couple of weeks later, Loyola Night moved up the Red Line to Wrigley Field for the Cubs’ version of Loyola Night, where men’s basketball coach Porter Moser did the first pitch honors. It was a harmonious way to celebrate both of Chicago’s home teams—at least until spring training. 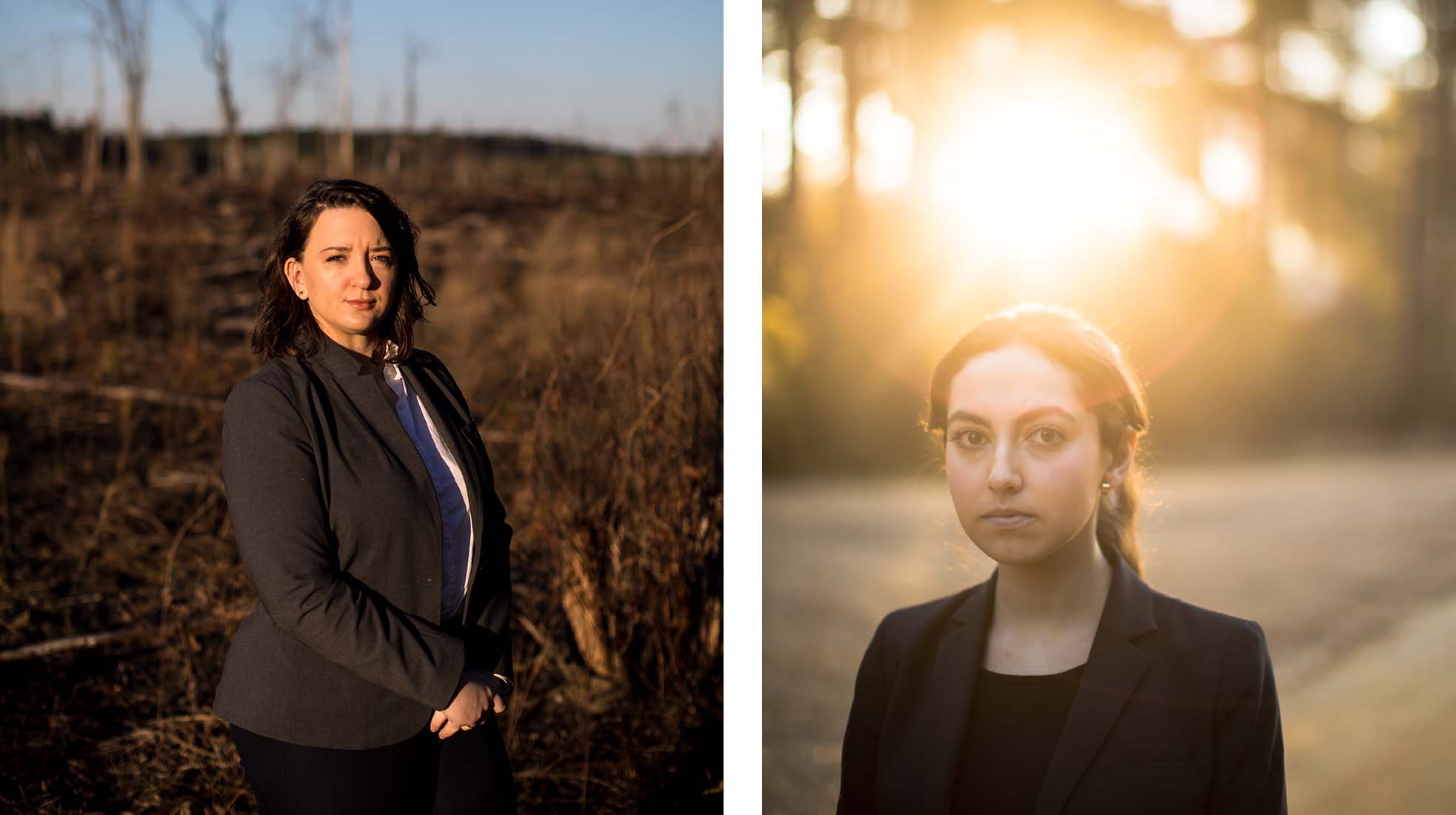 Loyola law students Samantha Schatko, left, and Patricia Martin came up with the idea of a week-long student immersion experience in immigration law, which led to them form a group to travel to a rural area of Louisiana during their spring break.

There’s a strong tradition at Loyola of students devoting their spring break to service. But this year, an ambitious and dedicated team of law students took things to a whole new level.

A team of students organized and spearheaded a spring break trip to Jena, Louisiana, to spend their week helping immigrants detained in the LaSalle ICE Processing Center. The hours were long, the work emotional draining, but in the end the newly established Immigrant Detention Project had made a clear difference in the lives of those detainees. It was the first of what the students’ hope will be many similar trips to come, visiting areas that may be in remote locations but where the need is obviously great. And if you’re a student at Loyola, what could be a better way to spend spring break? 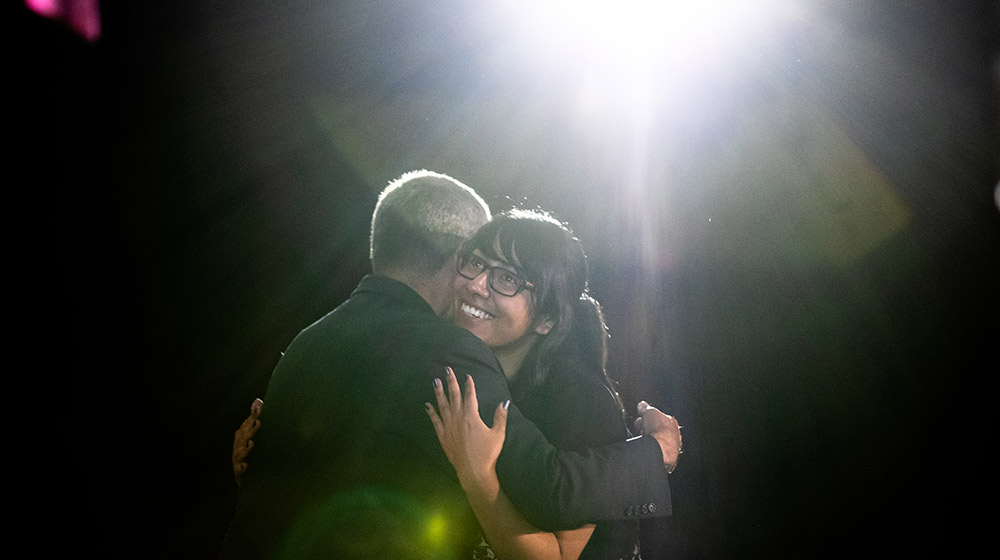 Arrupe College alumna Abby Bautista spoke about her Arrupe experience during the annual Founders Dinner on September 16, which this year celebrated the fifth anniversary of Arrupe.

When Arrupe College was created five years ago, it had some pretty ambitious goals: Provide opportunity for underserved students in Chicago. Help them realize their potential by earning two-year degrees with little or no debt. Get them ready to attend four-year colleges if they wanted to pursue a bachelor’s degree. And set them up for a successful future.

Over time, that dream unfolded in Maguire Hall on Loyola’s Water Tower Campus. Arrupe students shattered national averages for the completion of an associate’s degree in two years. They lived up to—or even exceeded—expectations at four-year colleges and universities, with the first crop of Arrupe graduates earning bachelor’s degrees this spring. Students like Brandon Thomas and Jacky Cruz proved that the Arrupe model could work, and that it could change lives. This year’s Founders’ Dinner celebrated Arrupe’s growth and success, with a trail that has now been blazed for countless future students who walk through Arrupe’s doors. 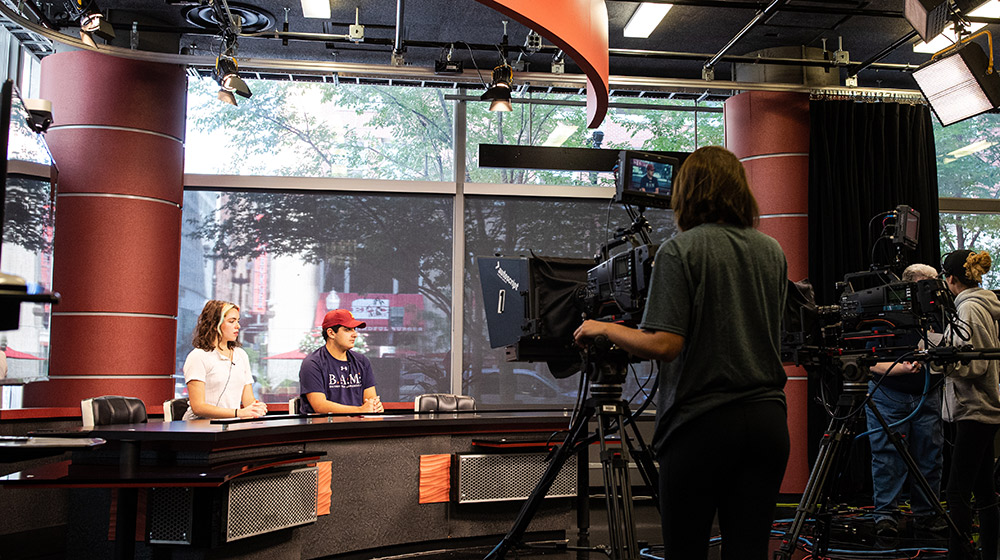 It was a big year for the School of Communication. The school celebrated its 10th anniversary, and student radio station WLUW marked 40 years on the air with an alumni takeover. Faculty member Elizabeth Coffman was honored for her documentary on Flannery O’Connor by none other than the king of documentary himself, Ken Burns. And the school welcomed its new dean, Hong Cheng.

As the school looks ahead to 2020 and beyond, there are even more big things to come. And that is most certainly not fake news.