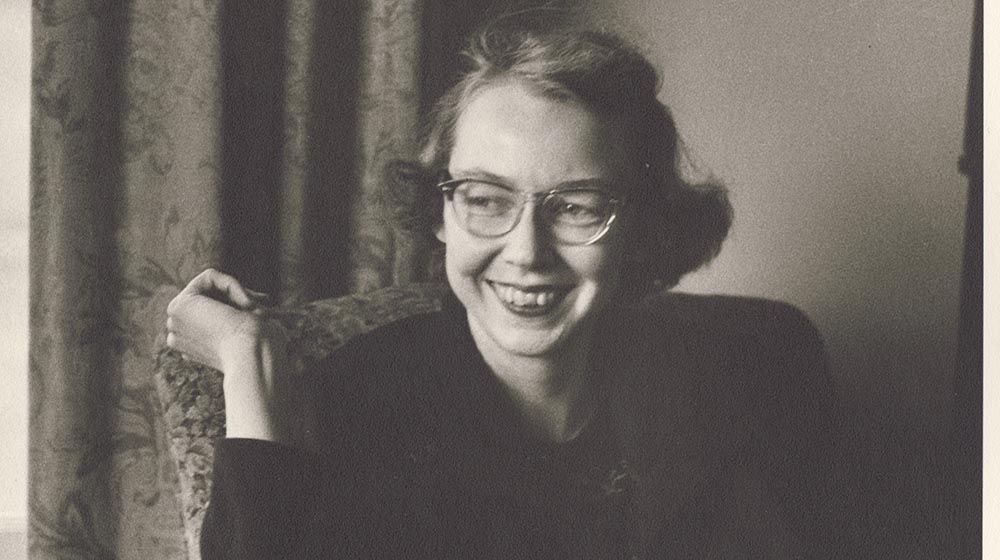 Elizabeth Coffman hadn’t read much of Flannery O'Connor's work when she got a call from an old friend, Mark Bosco, S.J. He had acquired old photographs of the late author, and was interested in bringing her life to the big screen.

“Mark Bosco was putting on a conference on Flannery O’Connor, and he called me up and asked me to help him do some interviews,” says Coffman, a documentary filmmaker and associate professor in Loyola University Chicago’s School of Communication. “He told me he had inherited these older interviews that a friend, Chris O’Hare, had done. He had interviewed Flannery O’Connor’s editor, publisher—these people are now dead. When I looked at the interviews, I knew that this was an NEH (National Endowment for the Humanities) grant. I knew we could do it.”

O’Connor was an author, political cartoonist, and pseudo-chicken trainer, and she’s now the focus of a new documentary film directed by Coffman and co-directed by Bosco, the vice president for mission and ministry at Georgetown University and former director of Loyola’s Hank Center for Catholic Intellectual Heritage. The documentary on the life of O'Connor is the first film to receive the Library of Congress Lavine/Ken Burns Prize for Film, a prestigious award that grants $200,000 finishing money to Coffman and Bosco. And the praise keeps coming; the film also took home the juried "Best Documentary" award at the 2019 Austin Film Festival.

The process was long—almost eight years—but small discoveries along the way kept the team going. As Coffman learned more about O’Connor, she noticed the similarities between the two of them. O'Connor grew up in Georgia, not too far from Coffman's hometown of Jacksonville, Florida. Both being from the South, Coffman described the unique relationship with her home state that O’Connor reflects on in many writings.

“When you grow up in the South I think you’re just torn,” Coffman says. “If you’re aware of history at all you’re aware of its history of racism, the Confederacy, and the ongoing segregation. I couldn’t wait to get out of there. I moved to New York as fast as I could. But I don’t hate the South. I don’t."

Click here for a sneak peak at Flannery, a documentary film on the life of author Flannery O'Connor. 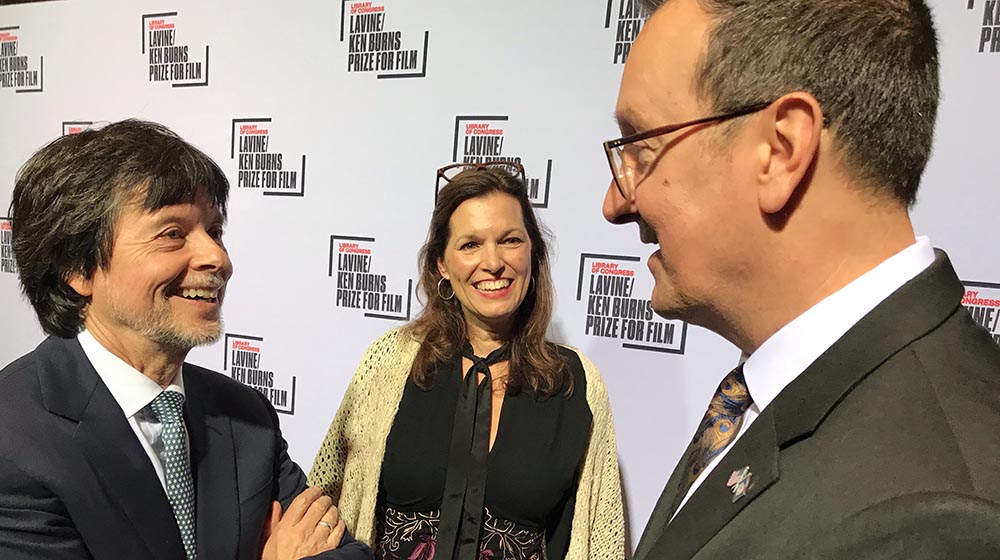 Elizabeth Coffman, center, an associate professor in the School of Communication at Loyola, and her co-director Mark Bosco, S.J., right, speak with legendary documentary filmmaker Ken Burns at the award presentation for the Library of Congress Lavine/Ken Burns Prize for Film. (Photo: Ted Hardin)

Coffman talks about O’Connor like an old friend. Recounting funny stories from her childhood, describing the only two times O’Connor was caught on video—one of them involving a chicken walking backwards.

“She never complained. She was stoic. She was maybe a little arrogant but if there are any failings that would be her only one,” Coffman says. “There are only two moving image film documentations of her, she hated cameras and TVs. It was a challenge as a documentary because there wasn't a lot to go on. But when she was five, British news came over to film her because she taught a chicken to walk backwards, but they really just put the film in reverse to make it look like the chicken was walking backwards.”

When the call came about the award, Coffman thought the Library of Congress was calling with a concern about her copyright on the film. In the rush of putting together a documentary, she forgot she applied for the award in the first place.

“Then I got a call from someone at the Library of Congress saying that the Librarian of Congress wanted to talk to me,” she recalls. “I just didn’t think we would (win). Mark Bosco kept saying that it was a miracle. ... I was more focused on the hard work behind it.”

Coffman hopes the documentary will air on PBS, as a way to bring O’Connor to a larger audience. She wants the message of O’Connor’s devotion to her faith, family, and practice to be as accessible as possible.

“I don’t know,” she says reflectively, “maybe it is a miracle after all.”