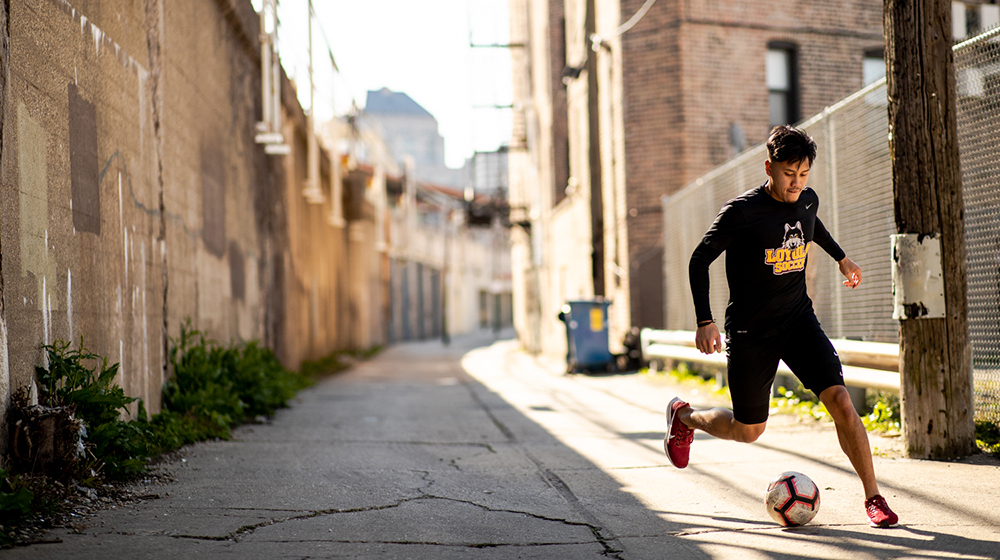 With the help of coaches and trainers, Loyola University Chicago student-athletes are finding novel ways to keep their edge while sheltering-in-place

It took time for Giann Magno to acclimate. One day in March, the midfield mainstay on Loyola University Chicago’s men’s soccer team was turning around defenders in spring scrimmages, preparing his body and mind for his forthcoming senior season and another NCAA tournament appearance later this fall. The next day, he was shepherded into the locker room by his coach, Neil Jones, and told that all athletics (not to mention in-person classes) would be suspended indefinitely. Be grateful our season wasn’t cut short, Jones advised, and try your best to stay conditioned in the meantime.

“Going from playing every single day to not being able to play at all, I feel like I’m losing my mind sometimes,” Magno says. “It’s hard to concentrate on certain things, especially school, when I haven’t expended that right amount of energy.”

Slowly, though, Magno has settled into a shelter-in-place regimen that, while imperfect, keeps him organized and focused. The alarm rings in his off-campus apartment, often before 7 a.m. He throws on sweats and hits the pavement—running on Rogers Park streets, not the soccer pitch where he prefers to sweat it out. He’ll follow up his cardio with at-home strength training, mimicking a body-weight circuit developed by Loyola’s strength trainers specifically for confined spaces.

Soccer-specific skills training is trickier to replicate, but Magno will park himself “on the road or on any patch of grass I can find” for close ball work, juggling under the ‘L’ tracks and dribbling six feet from strangers. He tackles classwork in the afternoons, and keeps his mind busy at night watching old matches on YouTube or calling his family back in England. Solo training can feel like a lonely pursuit, Magno admits, with motivation fleeting. “I’ve just tried to make it as close to what the routine would be if we were still in training.”

The abrupt disappearance of college sports in the early days of the COVID-19 pandemic was disorienting on a national scale, a sure signal of the virus’s ferocity. In the weeks since, student-athletes in every corner of Loyola’s athletics department have adjusted on the fly to a strange new competitive landscape. There are no games or practices, no gym access, and no human contact permitted. The intensity of live action can’t be replicated. But with enthusiastic guidance from coaches and some creative problem-solving, Ramblers like Magno are finding novel ways to keep their edge.

“It’s almost like we’ve gone through these stages,” says Steve Watson, Loyola’s director of athletics. The first concern was immediate safety—ensuring athletes had essentials covered and comfortable places to stay. “Then we shifted into the academic piece, and made sure they had what they needed to take classes, like WiFi and laptops and access to our tutors and academic coaches. And now we’re talking a lot more about staying in shape, making sure they’ve got the training programs and the resources they need to stay fit and ready-to-go for next season.”

A lot of that planning falls on the thick shoulders of Dave Vitel, the assistant athletics director for sports performance. He and his coworkers are making the best of a bad situation, building and sharing remote workout programs knowing full well their athletes don’t have anywhere near the space or equipment available to them in quarantine as they do on campus. “When I came to Loyola [in 2011], it was to create a holistic approach,” Vitel says. “It’s still like that here on the road. Can we recreate that Loyola atmosphere at home?” 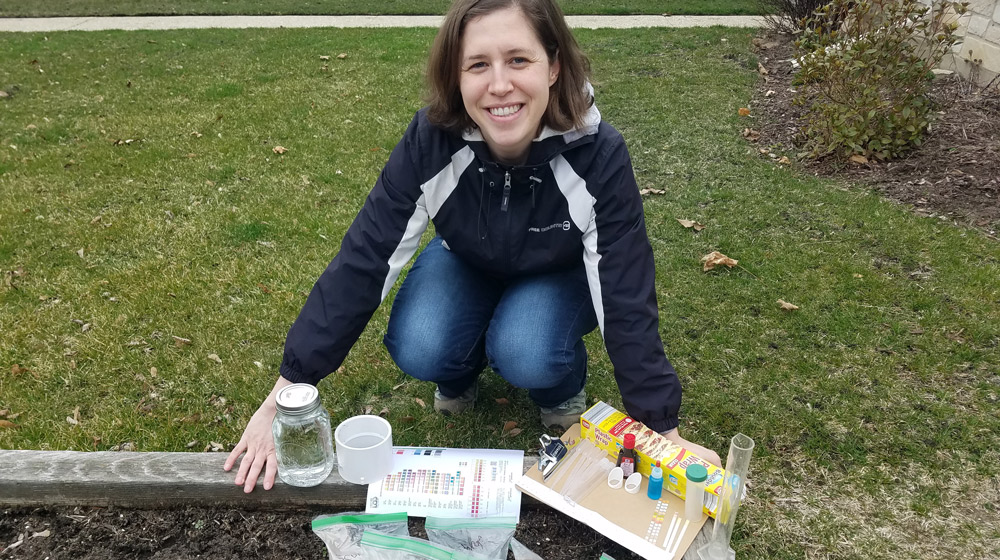 Loyola faculty are showing plenty of creativity in their efforts to teach students from afar. Learn how they're making the move to remote learning in the face of a pandemic.

Initially, the strength staff took an informal audit. What was everyone working with exactly? Vitel would receive a typical note: “Hey, I have one dumbbell, two bands, and an exercise bike.” From there, routines were customized. Maybe you’re filling up water jugs for lunges? Maybe you’re squatting with your little brother draped on your back? The men’s basketball and volleyball staffs shipped their players elastic resistance bands. When he needs to clear his head, Vitel himself lifts the garage door and sprints the length of his driveway, back and forth. Creativity is the name of this unusual game.

Explanatory videos are posted to Instagram or YouTube, along with extras like yoga sessions, nutrition tips, and recipes. Vitel joins team Zoom meetings and connects virtually with individual athletes, using his screen and his passion as a guide. Health counselor Alexandra Wulbecker-Smith has built mental health workshops to aid athletes struggling with the intense disruption; without balance, the workouts won’t take. The ultimate goal is to offer everyone as many relevant options as possible during an ominous period. “And if we help these kids get through this,” Vitel says, “maybe we create a better person and athlete on the other side.”

Coaches, too, are upending plans and improvising, trying in earnest to keep players connected to their respective programs. They’re doing so while navigating a slew of pandemic rule changes; the NCAA has extended its recruiting dead period—which restricts on- and off-campus visits— through May 31, and has temporarily barred face-to-face instruction.

The last day that women’s volleyball coach Amanda Berkley met with her team, on March 13, she stressed to them the importance of self-starting. The message was clear: “Try to touch a volleyball as much as you can, and really focus on your academics.” In the intervening weeks, Berkley has filled a document with drills they can do on their own or with a partner: passing to themselves in the air, blasting a ball against a wall, leaping to the garage gutters to hone blocking technique, peppering back and forth with a partner. “Some of them have played with their moms and dads—they’ve sent some videos, which are … entertaining,” Berkley says. “And they are probably getting a bigger workout than they hope for because they have to chase the ball so much!”

Recruiting is another animal entirely. Watson credits his graphics and communications staff, who have put together materials that “have done as good a job as we can showcasing our campus, our facilities, our athletes, the atmosphere of our games.” Men’s basketball head coach Porter Moser told the Chicago Tribune that he might send a potential Rambler “a social media post of an NBA play that reminds him of something a recruit excels at.” Berkley actually signed a setter from Florida for next season virtually. In lieu of a cancelled official visit, on March 12, she held a “FaceTime visit,” walking Jenna Appel around Lake Shore Campus and through the Alfie while connected through her iPhone. Appel committed the next day.

When might student-athletes get called back to campus? When will they be cleared to play again? What will those events even look like in an era of social distancing? Staying calm through all the uncertainty is the trickiest challenge facing Loyola coaches at the moment. Berkley is set to add eight freshmen to her roster in the fall, players who likely won’t have the chance to staff summer camps or train with the team informally in between summer classes.

In some respects, Zoom is the new locker room; the volleyball team is hosting weekly virtual meetings where, according to Berkley, “they’ve talked about what their culture is like, how practices are going to be run, and what their expectations are for each other.” Moser sent his basketball players home with a copy of Kobe Bryant’s Mamba Mentality and paired them with “accountability partners,” who they keep in touch with through the week—when they aren’t fielding surprise calls from Sister Jean. “Maybe culture-building isn’t something we’d spend as much time on if we were on the court all the time,” Berkley adds. “That’s something unexpected that could be valuable for our team down the road.”

This time away also provides Ramblers with some space to indulge their hobbies and focus inward. Vitel is helping all four of his kids with e-learning, interspersed with ninja warrior competitions in the backyard. Berkley takes long walks with her husband, lugging a volleyball along with her every so often. Moser outlined to the Tribune his relentless schedule: Peloton bike workouts, journaling, podcast appearances, online coaching clinics, Spikeball tournaments with his four teenagers.

Magno, for his part, has found solace in the kitchen; he thinks his nutrition has actually improved now that he’s got extra time on his hands to meal prep. “I can make a really nice little breakfast plate,” he says. “Though I don’t actually eat it until noon.”

The soccer squad stays in contact through Friday Zoom sessions and on several group chats, where they “throw a little banter around.” Recently, Magno admitted to his teammates that his energy had flagged off the pitch, in those confounding first days of the pandemic. How’d he restore that drive? “I kept thinking about another trophy we’re going to win in the fall,” he told them. “All of our training goes to that right now.”

In the unprecedented upheaval caused by the COVID-19 pandemic, Loyola has responded with care, compassion, and concern for the well-being and safety of our students, faculty, and staff. Visit our coronavirus response site to learn more about our efforts and the latest updates on our university.