A faith in action

“Before coming to Loyola, I never saw my faith as my own—it was my family’s faith,” said Ximena Aranda Mejía Galán. “Here, I have been able to develop my own faith and my own relationship with God. Loyola has changed my faith completely.”

Mejía Galán, a senior economics and management major from Caracas, Venezuela, credits Campus Ministry—especially a faith discussion group for Spanish-speaking students—with helping her explore her own relationship with God. The Jesuit belief of finding God in all things resonates deeply with her Loyola experience. “Whether I am in a classroom, dorm, or activity, I have started to recognize that God is everywhere,” she said.

Ignatian spirituality is embedded in all facets of a Loyola education, whether it is the personal way professors teach in the classroom, Loyola’s presence in the surrounding Chicago community, or in opportunities the school provides for reflection and mindfulness.

As a Jesuit university, Loyola is committed to promoting social justice and seeking truth through solidarity with others. Animated by this Jesuit approach, Loyolans are called to be men and women for and with others, using what they have learned in service of those in need.

“We hope students learn a way of discerning what they really want in life, and answer the question: ‘Who am I?’ In answering that question, they have a path to happiness by becoming the person that God made them to be.” —Fr. James Prehn, S.J., vice president and special advisor to the president for mission and identity

‘ We serve not only our Catholic students, but a multi-faith community. We provide the tools and resources to help all of our students grow in their faith tradition.’ 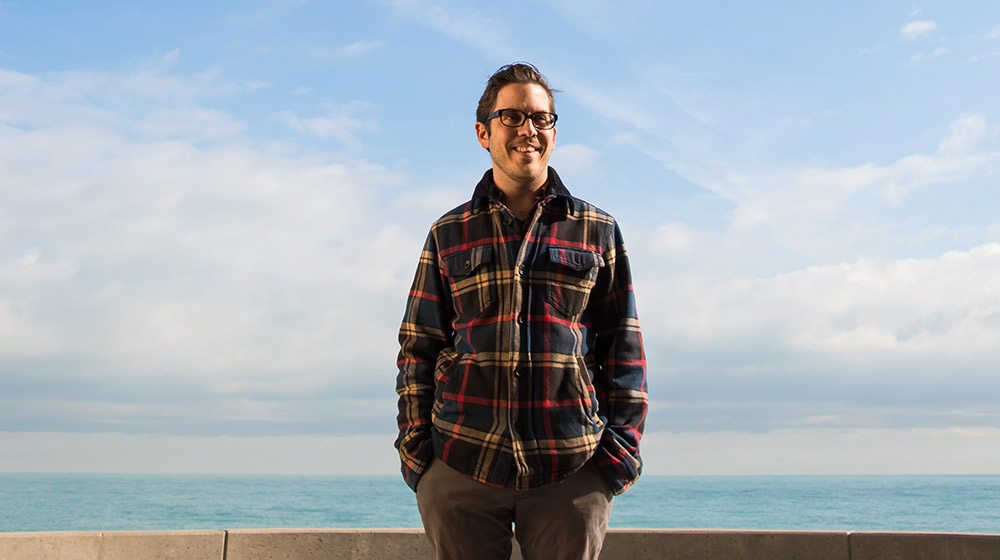 “The Jesuit commitment to interfaith dialogue gives Protestants a seat at the table, something for which I am immensely grateful. I think it also creates space for talking about God where it may not have been provided at a public university. Questions of the intersection of faith and justice, and of a life well-lived, are second nature at Loyola, and I credit Jesuit values for that.” 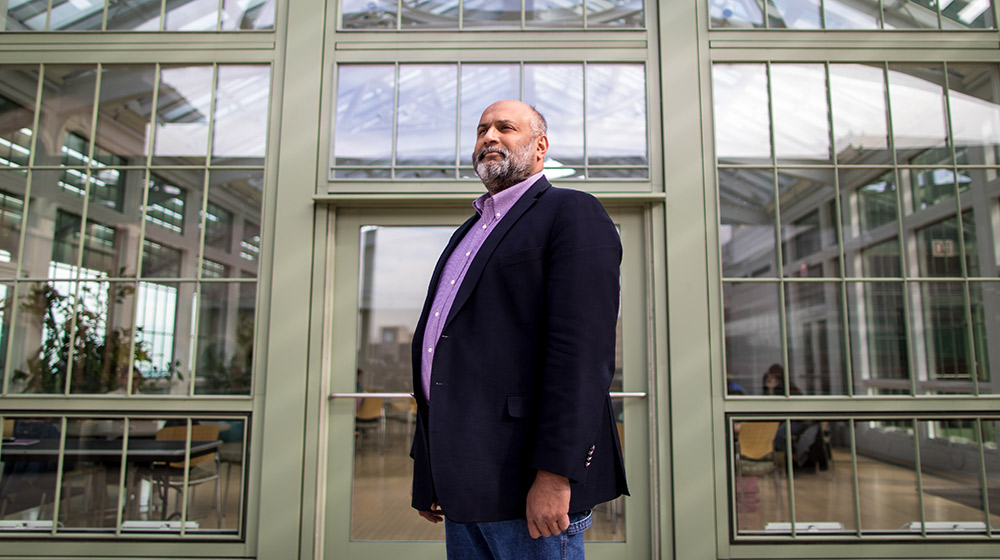 “There are of course a lot of overlaps between Islam and Christianity, but there are also a lot of overlaps in Jesuit pedagogy and the techniques I use with Muslim students. I have had students conduct exercises that I later discovered have strong parallels in the Examen. Further, magis and cura personalis line up extremely well with my Islamic methods. I have even extolled the virtues for Muslims of these different approaches and outlooks we find in the Jesuit mission and tradition.” 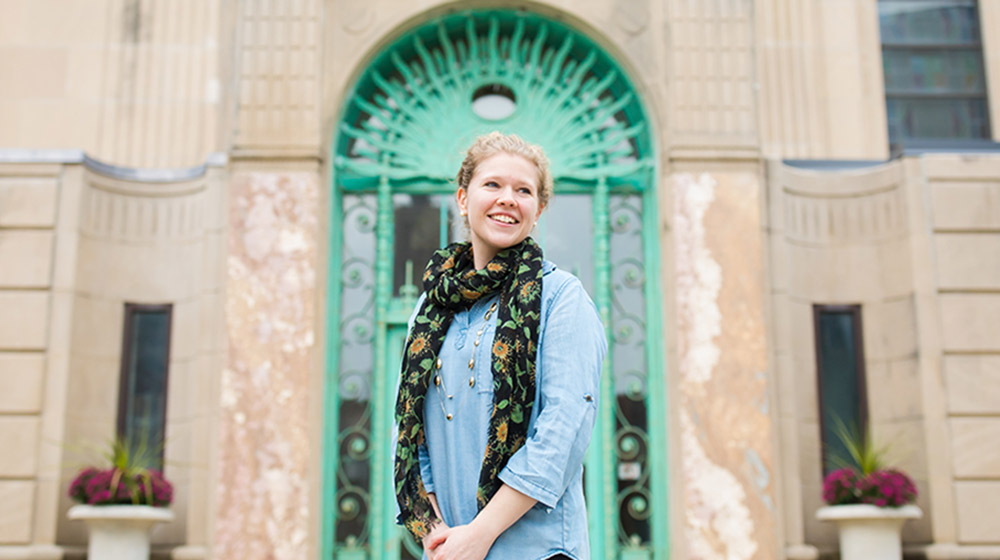 “One of the five key characteristics of Jesuit education is global awareness—developing and demonstrating the understanding that the world's people are interrelated and interdependent. This core belief creates an incredibly welcoming environment both for students of diverse faiths to express their faith on campus, and within the religious spaces on campus.” 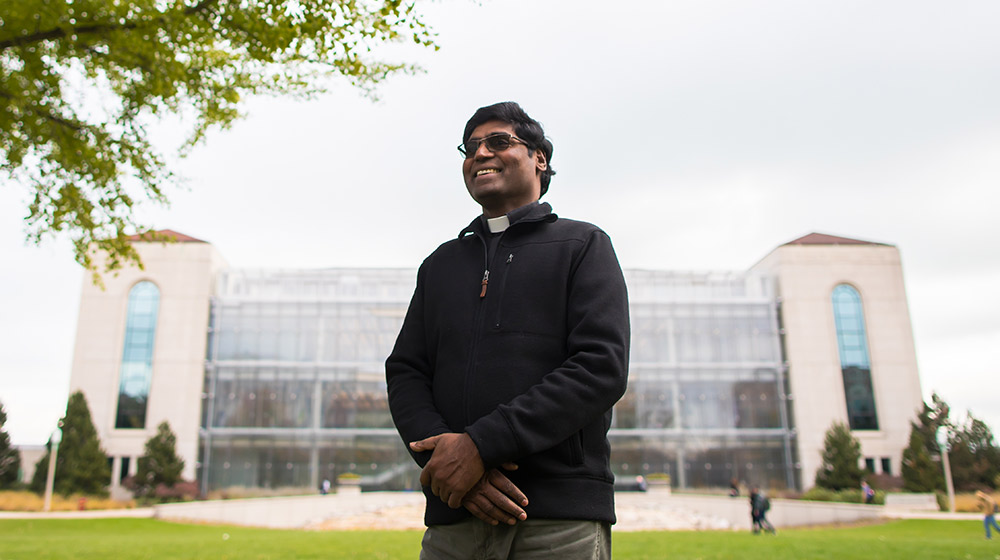 “Respecting diverse faith traditions and providing spaces and opportunities to practice and deepen one’s faith is a significant aspect of Loyola’s mission. Our identity as 'a diverse community seeking God in all things' guides and impacts my work with the Hindu students on campus. The students greatly appreciate the way Loyola reaches out to them and makes them feel at home.”

A faith that works

At Loyola, commitment to social justice stems from Catholic social teaching and our Catholic faith. It is a faith in action, one that influences teaching, learning, and how this community spends time.

“We engage young people in education that will help them discover their innate talents and use those gifts not only to advance their own careers, but to shape a more just, more humane, and sustainable world,” said Janet Sisler, acting vice president for mission integration.

Even outside the required theology and philosophy coursework, Ignatian thinking animates teaching and learning, with an emphasis on equipping students with ethical reasoning and decision-making skills.

“Jesuit education is rooted in understanding and knowing our students,” said Ann Marie Ryan, PhD, associate professor of education and former fellow in the Faculty Center for Ignatian Pedagogy. “It is also about being deeply reflective about your teaching—what went well, what could have gone better, and what adjustments you can make.”

Reflection and discernment in decision making are hallmarks of the Jesuit order and Jesuit education. Regardless of where students are on their faith journey, the opportunity to pause and be mindful, while also forming bonds and connections with fellow students, is central to Ignatian spirituality. Once given this opportunity to reflect, it is important—and inherently Ignatian—to go back out into the world and serve as God’s presence for others. 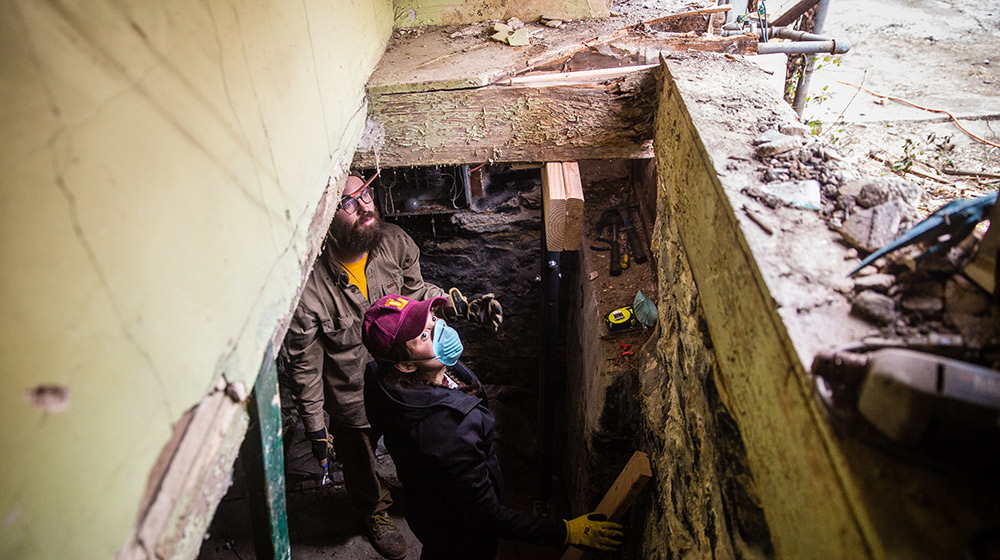 Through alternative break immersion (ABI) trips, students walk alongside others in solidarity, learning firsthand about people from all walks of life. (Photo: Natalie Battaglia) 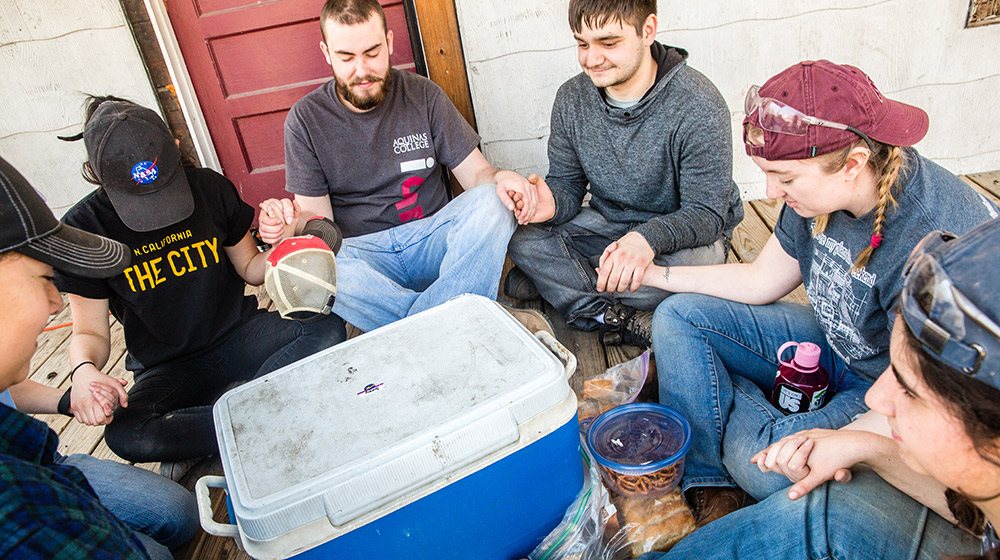 Students and staff lived in an intentional community during their ABI trip in Jerusalem Farm in Kansas City, Missouri, practicing mindfulness and reflecting on the impact of their actions. (Photo: Natalie Battaglia) 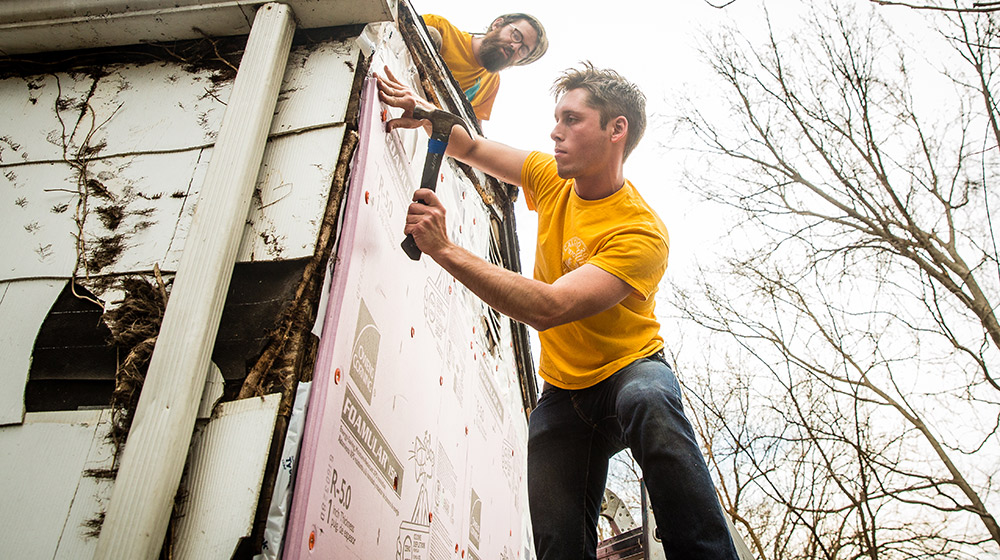 “What I’ve taken with me is a deepened sense of compassion and an ignited sense to serve the world in a better capacity,” said student Hunter Hayes about his experience. (Photo: Natalie Battaglia) 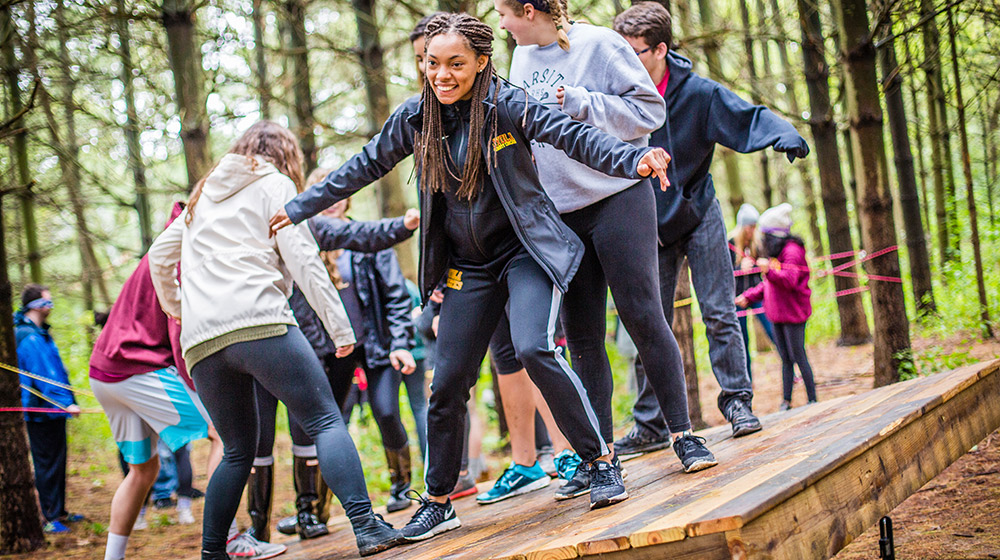 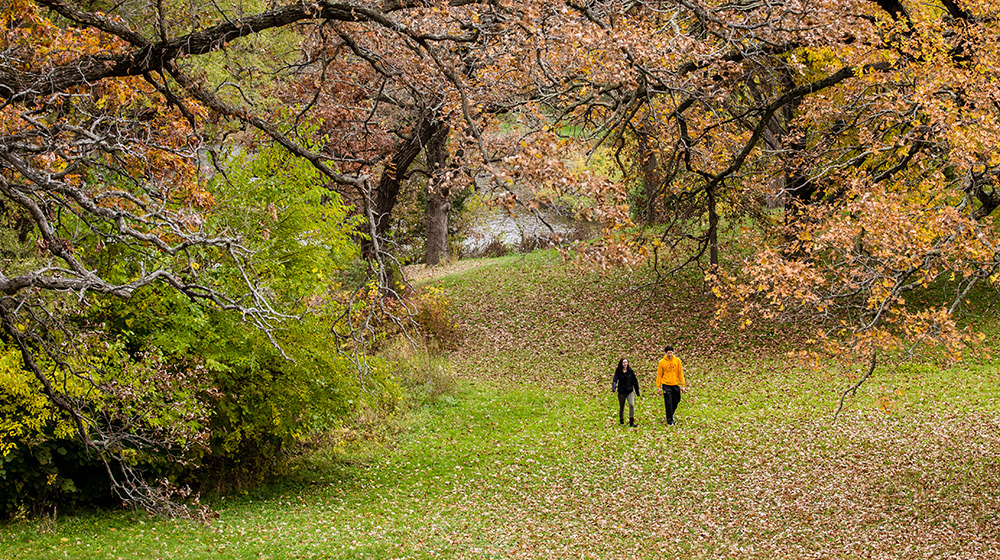 Loyola’s Retreat and Ecology Campus in Woodstock, Illinois, covers 98 acres and is open to those inside and outside the Loyola community. (Photo: Natalie Battaglia) 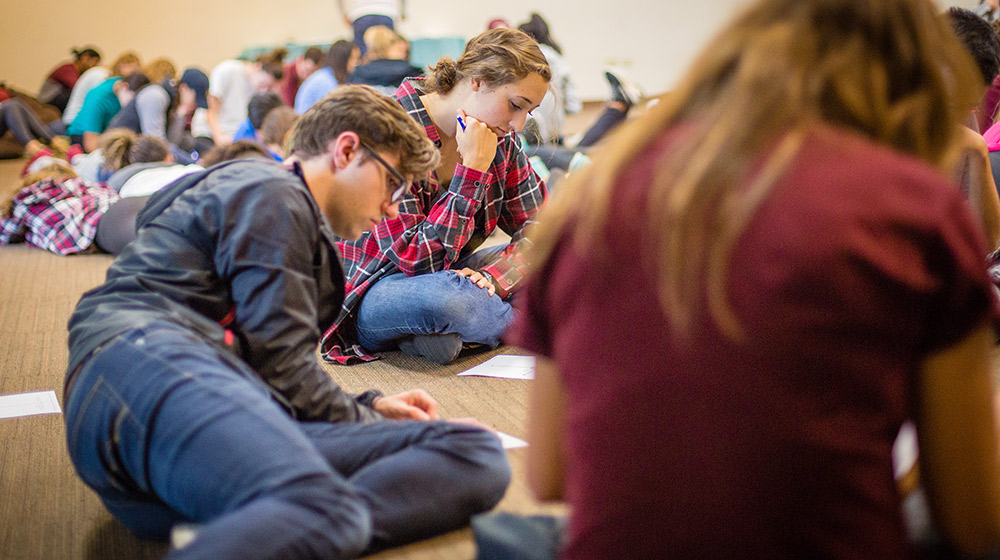 From team-building to self-reflection, these retreats provide students the opportunity to build friendships as well as a better understanding of their own self. (Photo: Natalie Battaglia)

Law school chaplain Father Jerry Overbeck, S.J., emphasizes to students that they must be citizens of the world.

Every Thursday evening, Overbeck joins students in the Labre Ministry, which offers food and friendship to people experiencing homelessness near the Water Tower Campus.

“It’s not only making food to take around, but it is actually spending time with them,” he said. “Then we come back and think about what we just did, reflecting on it in light of faith. It is contemplation in action. We are sitting in the middle of a vibrant city—how do you find God in the middle of it all?”

James Egan was a Labre student leader, and called it “a ministry of presence.”

“It’s about creating personal connections in a spirit of solidarity with people who are often passed by and ignored,” said Egan. “By listening attentively and offering kindness and conversation, [students] can make a small but significant difference.”

Although Labre’s focus is on the homeless individuals it assists, students also change because of their involvement. Being on a campus in the heart of Chicago means students are surrounded by need; those struggling to make ends meet are often as close as the nearest sidewalk. “Labre is an avenue for students to ...experience some reality of the streets,” said Nicole Chmela, who served as campus minister at Water Tower Campus and directed Labre for eight years. “That informs how they use and value their Jesuit education and, in turn, what they will do when they leave Loyola. I think that’s really a beautiful thing.”

St. Ignatius of Loyola founded the Jesuit religious order and wrote the Spiritual Exercises, one of the most influential books ever written on spiritual life. He was skilled in the art of spiritual direction and encouraged his priests to seek God in all things, to serve those in need, and to become people for others.

St. Ignatius gained fame for his valiant deeds as a Spanish soldier in the 16th century, but when his leg was shattered by a cannonball in battle, Ignatius had a moving conversion experience. While recovering from his wound, he began reading about the life of Jesus and the saints and eventually had a vision of Mary, the Mother of God. Inspired, he spent a year in contemplation, writing what would later become the Spiritual Exercises, and dedicated his life to God.

Each November, we explore the legacy of St. Ignatius of Loyola and celebrate what Loyolans do throughout the year to live out his call to serve others. During this monthlong celebration, there are opportunities to reflect and act on the Jesuit mission of service, as well as recognize those who deeply live this Jesuit call. In addition, the Martyrs Award commemorates a worthy faith-based organization or individual for commitment to service and social justice. The award is named for the Salvadoran martyrs, in remembrance of their sacrifice and commitment to Jesuit and Catholic social teaching.

Take a closer look at the memorial for the Salvadoran martyrs, located on Loyola's Lake Shore Campus. And, discover more about Ignatian Heritage Month as well as this year's Martyrs Award recipient.