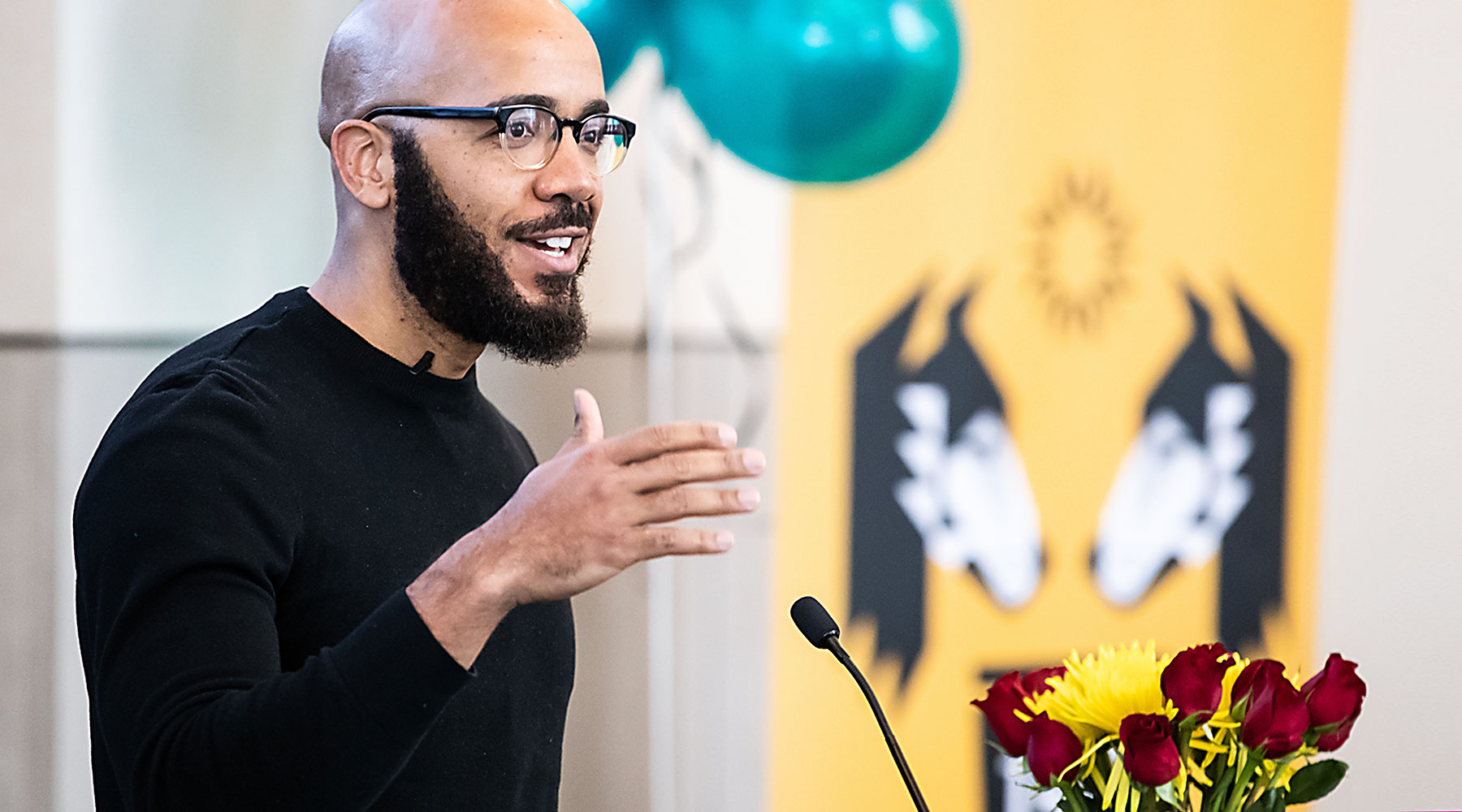 Writer, poet, and teacher Clint Smith speaks to members of the Loyola University Chicago community during his keynote at the annual MLK Celebration. (Photo: Lukas Keapproth)

Clint Smith is a person who has thought deeply about the history of race and inequality in the United States. Smith, a doctoral student at Harvard University, is also a writer, a teacher, and a slam poet champion. This January, he served as the keynote speaker at Loyola University Chicago’s annual MLK Celebration; his presentation incorporated dynamic poetry and his sharp wit. We caught up with Smith a few days after to discuss the questions he raised while on campus.

You were the 2014 National Poetry Slam champion. What first attracted you to slam poetry?

I came across the poetry slam community in 2008, at this place called the Nuyoricans Poets Cafe. It’s a small poetry cafe on the Lower East Side of Manhattan that has a historic and remarkable reputation of producing some of the most incredible writers coming out of New York and elsewhere. I’d never experienced poetry that felt alive in that way. I was an English major who was reading a lot of folks whose work didn’t necessarily speak to who I was or what I was seeing in the world, how I was experiencing the world. But I remember showing up at Nuyoricans—there was a woman who did a poem about living with cerebral palsy. In about three minutes, the way I thought about that entire demographic of people completely changed.

One of the remarkable things about this art form is that folks can provide an opportunity for you to see and hear work that speaks to pure experiences that might resonate with you, but it can also introduce you to a new set of ideas and perspectives that can be radically transformative. That’s what I experienced that night. Part of what I aim to do is create work that resonates with people on the stage as well as on the page. There’s no need to choose between one or the other.

You mentioned in your talk this idea that, as a society, we don’t talk about or reckon with the effects of slavery as much as we should. Why do you think that is?

Because it makes a lot of people uncomfortable. People are made deeply uncomfortable by the subject of slavery, specifically white people. People don’t want to reckon with the potential of their own complicity or the complicity of their lineage, and what that might say about them.

There’s a Southern Poverty Law Center study that says only 8 percent of U.S. high school seniors are taught that slavery is the cause of the Civil War. I think that’s telling—we don’t speak about this thing that fundamentally shaped the trajectory of this country, in more ways (I’d argue) than anything else. Instead, we create a warped narrative in which this was a blip on the road rather than something that was the road that we paved.

You also use the word “apartheid” deliberately to describe the American experiment. Why is that word important to you, and important to use?

I think “Jim Crow” is a phrase that softens the impact of what that period of time was. Between 1877 (after Reconstruction) and 1965 or 1968, depending on how you define it, we lived in a country in which black people did not have the same fundamental rights of citizenship as their white counterparts. Black people couldn’t buy homes, they couldn’t go to the same schools, they couldn’t go to the same public facilities. The list goes on and on.

Saying “Jim Crow” sounds almost cartoonish, rather than violent. I think it’s important to capture the very real systemic and institutional violence that was pervasive in that period of time. “Apartheid” gets us closer to that.

As we celebrate our 150th anniversary, Loyola University Chicago shines a spotlight on significant events that embody our enduring Jesuit, Catholic mission and continue our efforts to serve our local and global community. Get the full calendar of events included in our anniversary celebration. LEARN MORE

“Young black and brown kids are told their entire lives, the reason their lives look the way that they do, is because they are at fault or they’ve done something wrong. They are given that message both explicitly and implicitly, and I think that’s just so wrong.”

How does your experience teaching in the classroom—both at elementary levels and in college—shape how you think about history and inequality?

It’s shaped it in profound ways. I taught in a school in Prince George’s County, Maryland, where 96 or 97 percent of the students were black or Latino, and where the vast majority of them received free or reduced lunch. They lived in poverty. I saw every day how generations of plunder impacted every aspect of their lives. It impacted their school life, it impacted their home life, it impacted the lives of their parents, the jobs they were or weren’t able to get. It impacted their grandparents in terms of what houses they were allowed or weren’t allowed to buy. It showed me that schools don’t exist on an island. School is part of a much larger social, political, and historical ecosystem in which housing and schooling and jobs and food insecurity, all of these things are infinitely tied with one another and shape the outcomes that our students experience.

In the classroom, I was told that education is a panacea, it’s how we solve the problem of poverty, of inequality. I am a teacher and I think education is incredibly valuable. But it’s important for us to recognize that it’s much bigger than that. There’s a bigger set of factors that we have to reckon with. And I think, working with students, I wanted to disabuse them of the idea that any of this was their fault. Young black and brown kids are told their entire lives, the reason their lives look the way that they do, is because they are at fault or they’ve done something wrong. They are given that message both explicitly and implicitly, and I think that’s just so wrong. Part of what I try to do as an educator—in the classroom and in giving talks—is to give people the tools to understand that’s simply not true. We have free will, agency, and personal responsibility. But those things can’t be understood outside the context of the environments from which they are emerging. Those environments can’t be understood from outside the context of the history from which they’re emerging.

What did it mean to you to speak at Loyola on MLK Day? What do you think was Dr. King’s greatest legacy?

I think Dr. King was an incredible figure. As I mentioned in the talk, we often present him as a caricature of himself, a Teddy Bear of peace and justice. His legacy was far more radical and far more all-encompassing than we often make it.

He was somebody who continuously inveighed against the United States, not only for allowing racism and white supremacy but for its poverty. He did that on a global scale—he talked about the role of U.S. and Western imperialism destabilizing poor countries all across the world. One of my favorite things he ever said was that nobody should live in luxury while there are people living in poverty. It’s as simple as that. Part of what I hoped to share with the students and faculty and staff were reminders of the larger legacy of King, which is that he is someone who had a global perspective on what equality was. King was a historian himself, not necessarily by training. But he was someone, if you read or listen to his speeches, who recognized the role that history plays in shaping what the landscape of inequality looks like.

This conversation has been edited modestly for space and clarity.