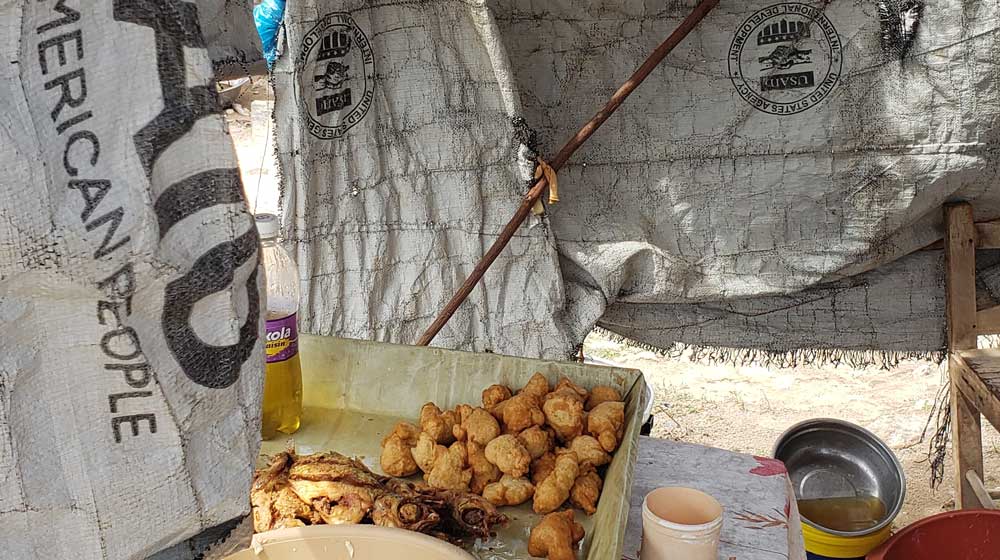 USAID banners, a rare sign of aid, are seen in southern shore Haiti, where Loyola sociology graduate student Stéphanie Jean-Baptiste spoke with people to determine the effects of Hurricane Matthew in 2019. This photo shows the only equivalent of a restaurant that was in the area, which primarily sold fried fish caught by local fishermen, fried plantain, and marinad, a type of fried salted pastry. (Photo: Stéphanie Jean-Baptiste)

In 2016, Hurricane Matthew brought with it a wave of destruction on the southern coast of Haiti. This was one of a series of political and environmental disasters that have led to an influx of Non-Governmental Organizations (NGOs) arriving with the intention of providing aid. Three years later, I became a research assistant to study those socio-cultural impacts of disaster efforts there. This five-year research project, funded by a National Science Foundation (NSF) research grant, investigates the efficacy of those interventions, as well as the lasting socio-cultural effect their presence has on Haitian society.

Last summer, which marked the third year of the project, I traveled to Haiti where each research team was assigned a city along the southern coast in Camp-Perrin. My team and I were assigned to the beach area of Port-Salut. In the first week, we connected with local area authorities to share our research goals. For the remainder of the five weeks, we went to different sections of Port-Salut and conducted 100 interviews in Kreyol (Haitian Creole), the official language of Haiti, with members of the community.

In order to find our participants, we had motorcycle drivers take us to some of the subsections of the towns. Once there, we spoke to residents who told us where we could find people who would be willing to talk to us. However, we could never really predict how many people we would be able to interview as we spent most of our days walking, and sometimes climbing, from house to house, many of which were often empty because people spent most of their time in fields working the crops.

While there, it didn’t feel like three years had already passed since the hurricane because the roads tended to be in such bad shape that taking motorcycles seemed to be the only way to reach some of these areas. The unkempt roads meant that, logistically, it was difficult for aid to reach these places. For example, in Roch Jabwen, a section of Port-Salut, Hurricane Matthew had destroyed homes, schools, and churches. 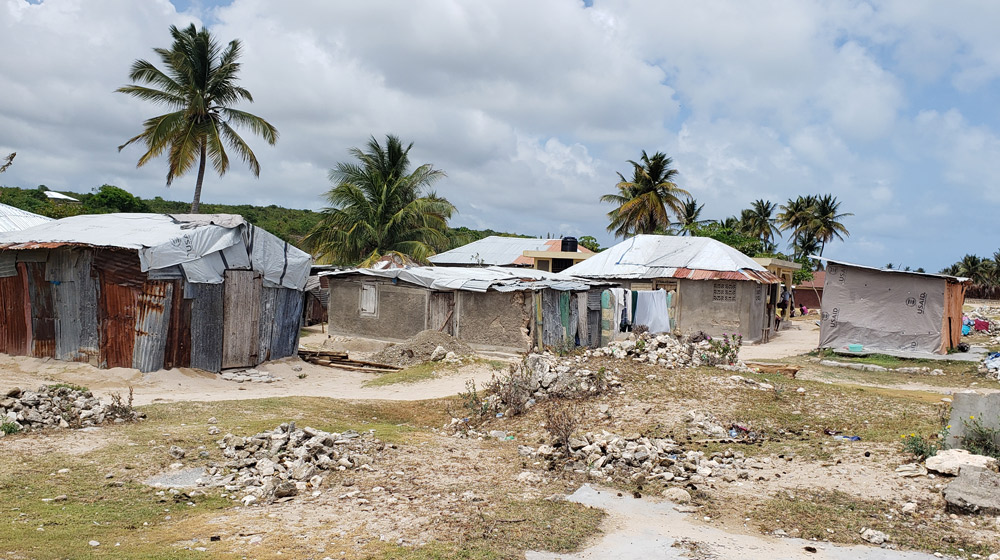 Homes in the Port-Salut region of southern Haiti, one of the localities most affected by Hurricane Matthew that left tremendous damage on the island in 2016. (Photo: Stéphanie Jean-Baptiste)

Most of the places we went to were difficult to access, which might explain why the people we approached had assumed that we were a part of NGOs and were there to bring aid. We had to explain that we were students who were a part of a research team. Most would ignore our explanations and would immediately proceed to talk about their community needs. A vast majority of our participants complained that, after the hurricane, many foreigners and researchers like us frequently came to ask questions, take their names and pictures, and left them frustrated because their conditions remained unimproved. Some expressed that they did not see the point of answering our questions if, in the end, they would not receive the help they need.

Others thanked us profusely for taking the time to document their issues. They saw it as being, at the very least, a step towards fixing some of their problems such as lack of access to roads and water. A handful of our participants thanked us for taking the time to speak with them by giving us fruits they had in their gardens. We would protest, but many would insist until we had put the fruits in our bags.

Some participants, although thankful, would apologize for not being able to give us anything, but would share their concern that we, my research partner and I, were two women walking in the countryside without a man to be with us. We explained that we had motorcycle drivers and that we were okay and that tended to reassure them.

Overall, participants expressed a desire for a collaborative effort between the Haitian government, NGOs, and members of the community to make Haiti a better country.

Fast forward to this academic year; I am again serving as a research assistant for the project. Right now, I am working on decoding and running statistical analysis on the data we collected over the summer. I plan on creating an up-to-date report of the needs of the people living in rural areas in Haiti; as well as provide an assessment of the work NGOs have done in the area. Ultimately, we hope every mayor of each research area will have a report to clearly share their community needs with potential NGO supporters.

Tasha Neumeister and McKenna Adams contributed to this report.