The Department of Fine and Performing Arts is pleased to announce Aram Han Sifuentes as their 2020-2021 Artist-in-Residence. Aram Han Sifuentes is a fiber and performance artist who works to claim spaces for immigrant and disenfranchised communities. Her work often revolves around skill sharing, specifically sewing techniques, to create multiethnic and intergenerational sewing circles, which become a place for empowerment, subversion and protest. 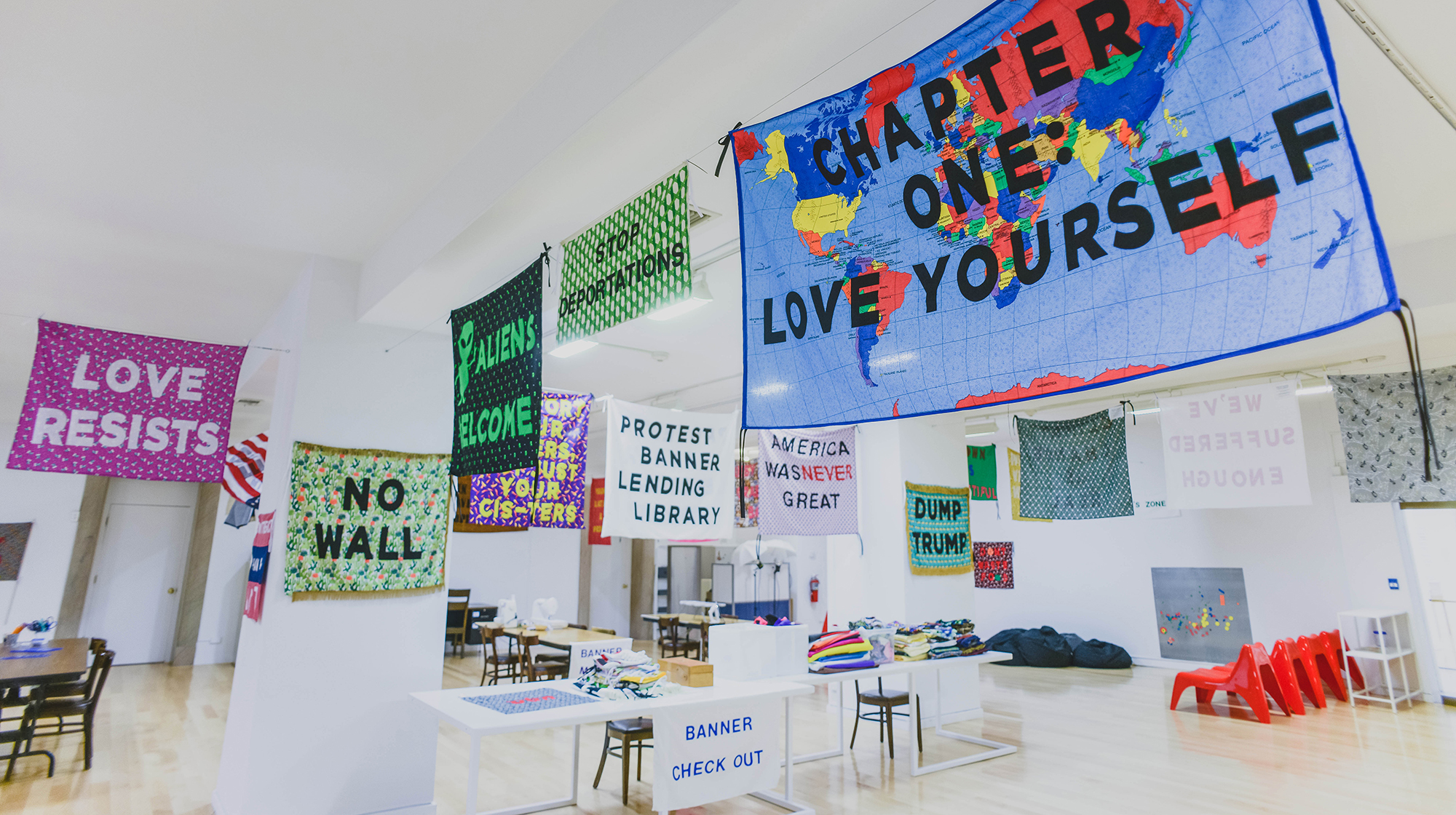 Aram Han Sifuentes is called to use her art practice for social justice:

"As an immigrant and daughter of a seamstress, I learned to sew at age six. It was not a choice but rather a necessity to help my mother earn of living. In this way, sewing has ever since been an important part of me, my body memory, and my politics. Sewing is my medium to investigate identity politics, immigration and immigrant labor, possession and dispossession, citizenship and belonging, dissent and protest, and race politics in the United States. My art practice situates itself at the intersection of fiber, social practice, performance, and pedagogy. At the core of my practice, I create socially engaged and materially rich projects in an ‘art world’ environment that are available and accessible for those who are disenfranchised, particularly for dispossessed immigrants of color."

Han Sifuentes is a 2016 Smithsonian Artist Research Fellow, 2016 3Arts Awardee, and 2017 Sustainable Arts Foundation Awardee. Her project Protest Banner Lending Library was a finalist for the Beazley Design Awards at the Design Museum (London, UK) in 2016. She earned her BA in Art and Latin American Studies from the University of California, Berkeley, and her MFA in Fiber and Material Studies from the School of the Art Institute of Chicago. 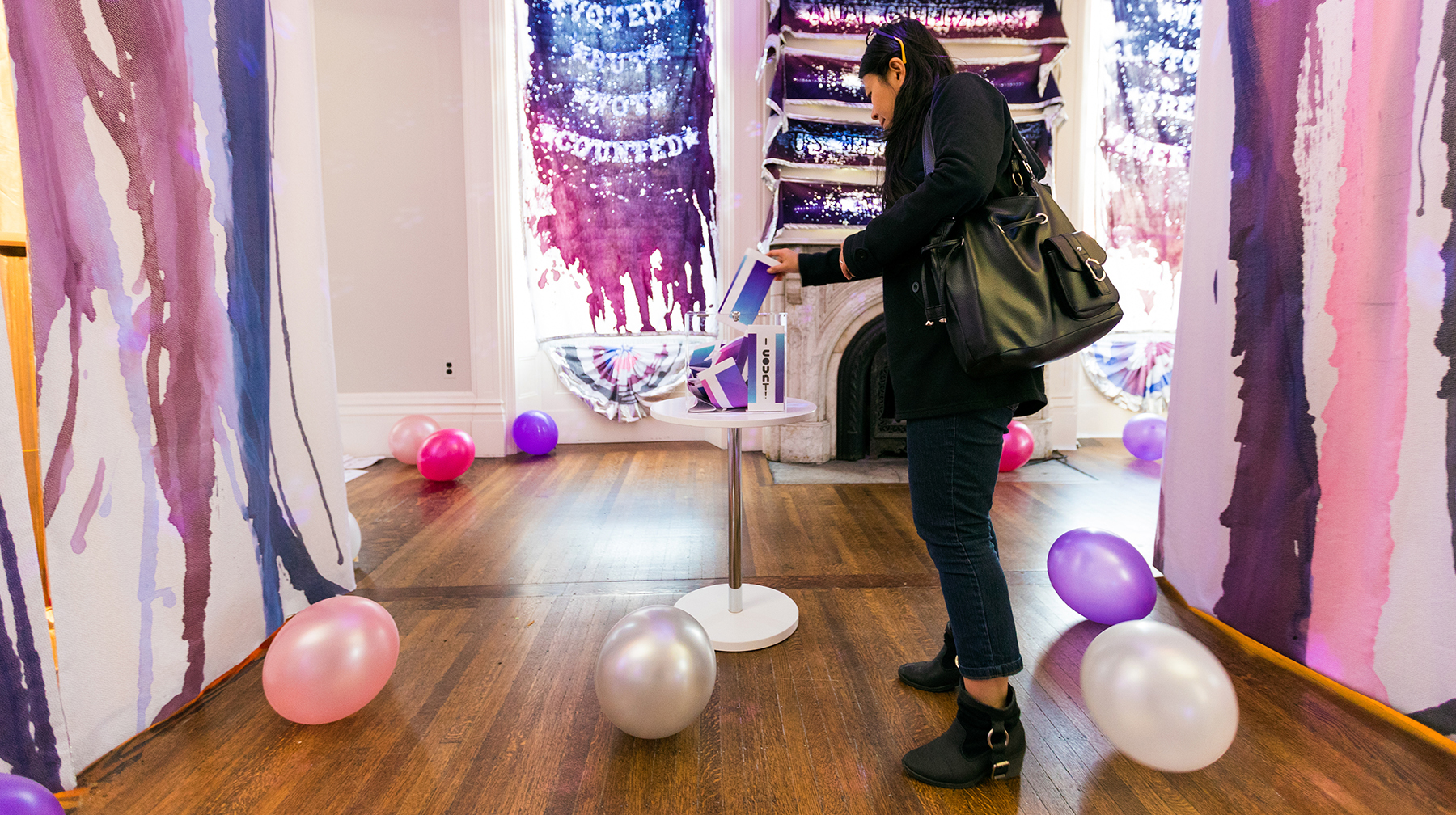 At Loyola University Chicago Han Sifuentes will share her social and intersectional practice with students and University community. During Fall 2020, she will teach Fine Arts 393: Official Unofficial Voting Station: Voting for All Who Legally Can't. This interdisciplinary fine arts course will engage students in creating their own materially rich imaginative voting stations during the 2020 election season. The class will explore social practice and socially engaged art, ethics of community collaborations, and the role of art in social justice through the use of various art mediums such as fiber and textiles, performance, sculpture and other formats.

In Spring 2021, Han Sifuentes will present Official Unofficial Voting Station: Voting for All Who Legally Can’t at the Ralph Arnold Gallery on Loyola’s Lakeshore Campus. For the 2020 U.S. Presidential Elections, Han Sifuentes has created Voting Kits for the Disenfranchised. These kits will be used by artists, activists, educators, students, etc. to ignite imaginative voting stations nationwide in order to bring attention to those who cannot legally vote in the United States. This exhibition will highlight these various voting stations as well as the ballots cast within them. The project is not meant to be a scientific demographic undertaking but a series of interconnected gestures meant to empower disenfranchised people.