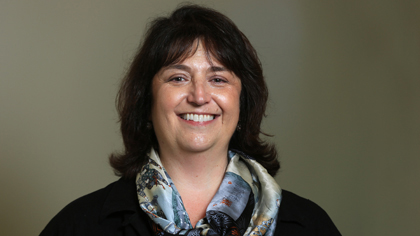 “It’s a privilege and responsibility of people who have done well enough in life to help other people,” says Dr. Robin Turpin (BS ’79, MA ’82, PhD ’85). And the triple alumna has certainly upheld that belief. Dr. Turpin has pledged $25,000 to Loyola University Chicago—a gift that was matched by the University as part of Access to Excellence: The Campaign for Scholarships—to establish the Turpin Endowed Scholarship in the College of Arts and Sciences.

Dr. Turpin, a Chicago native, is director of Health Delivery Systems and Pharmacoeconomics at Takeda Pharmaceuticals. She found a home in the psychology department during her time as an undergraduate at Loyola.

“It was a wonderful experience. I liked it so much that when I decided to go to graduate school, Loyola was the only school I considered,” she says. “I didn’t even apply anywhere else.”

Dr. Turpin believes that Loyola is unique in its commitment to upholding its Jesuit values and instilling a sense of integrity in its students. “I’ve always tried to be associated with organizations that have the highest ethical standards, and I think a large part of that is a reflection of what I learned at Loyola,” says Dr. Turpin. “I always felt the professors put their students first.”

“I think that as we as a country go forward, we have to look at all the different ways to educate people,” she says. “Whether you spend one or two years in school or even just take a few classes, for some people it’s a really good option to help them become successful. And for those students at community college looking to take the next step and get a degree at Loyola, I am proud to support that dream.”