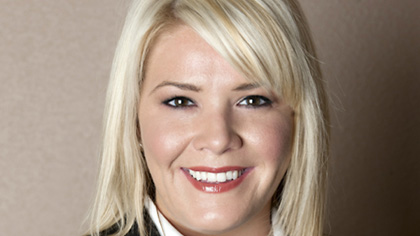 “My aunt always said, ‘You can’t be afraid to ask somebody to support something you believe in,’” says Bauer. And her aunt, Helen Bauer, knew what she was talking about. Before she passed away, she was executive director of Special Events at Loyola, and her passion was the advancement of the University.

This passion was instilled in her niece from a young age.

“I grew up visiting Chicago and Loyola as a kid,” says Bauer, who would commute to the city from Jackson, Michigan, spending her summers assisting her aunt with various events for the University.

“It was kind of a no-brainer when I decided to go here; it was where I grew up,” says Bauer.

Her time at Loyola as a kid gave her not only a fondness for the University but also the experience and skills that attracted employers before she even graduated. Bauer was hired part-time by the National Commission on Correctional Health Care as a junior. Her role in their meetings and events department soon expanded as she realized the potential in the often-neglected tradeshow industry.

“I created my own role and fell into that,” she says. “I started traveling for work, visiting different cities to see if they’d be good for our conferences.”

The part-time job quickly sparked the beginnings of a career for Bauer, who was still working on her undergraduate degree. She began a double life as both student and young professional. Luckily, Bauer received necessary support from her professors.

“My professors totally embraced that I had this career all of a sudden,” she says. ”If I was at a bigger school that didn’t focus on the success of its students so intimately, I would never have been able to grow to where I’m at now. I have more years in my industry than some of my competitors, and I’m 10 years younger than they are.”

Now, Bauer works as a national sales manager for Shepard Exposition Services in Las Vegas, where she moved four years ago. The company provides the physical set-up of exhibitions and conferences for various national associations. She was named the 2012 Young Professional of the Year by the International Association of Exhibitions and Events.

It was the culture of support at Loyola that inspired Bauer to donate to her alma mater. “It’s this vibe you get around people who are working for the greater good,” Bauer says. “That’s what Loyola is about—serving students and serving the community.”