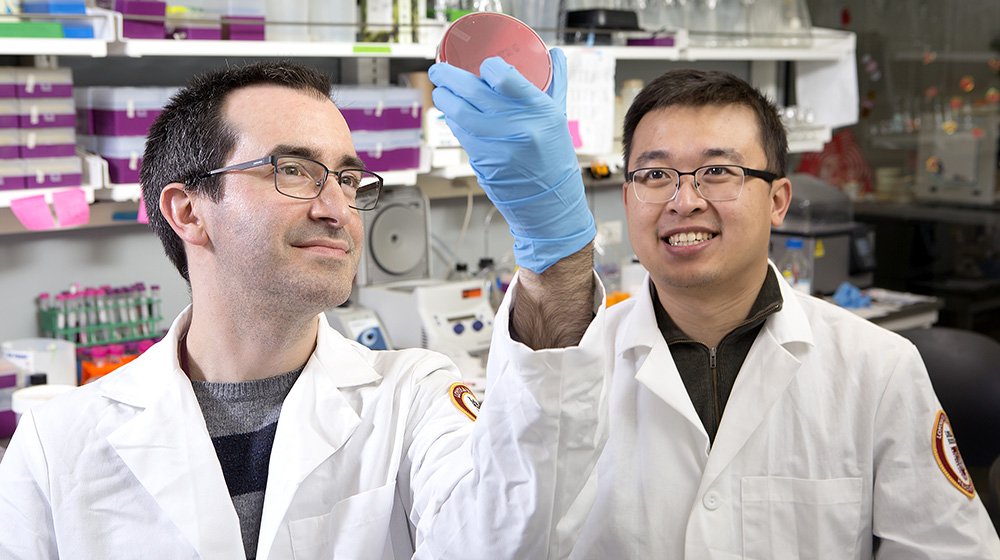 Dr. Alonzo with a student in his lab (Photo by Erik Unger).

It is a bacterium that is commonly found on our skin and in our nose. Most people can live with Staphylococcus aureus and be perfectly healthy. But for others, it can turn into a potentially deadly infection.

So how can Staphylococcus aureus transform itself from harmless bacterium into one that can completely avoid our immune system and resist usual antibiotic treatment?

That is what Francis Alonzo, PhD, assistant professor in the Department of Microbiology and Immunology, is trying to figure out in his lab. For his ongoing work, he was awarded the Junior Scientist of the Year award at this year’s St. Albert’s Day research celebration.

Dr. Alonzo is examining what gives Staphylococcus aureus the ability to maneuver past the body’s natural defenses. Figuring out these mechanisms could help lead to non-antibiotic based and more effective treatments for staph and methicillin-resistant Staphylococcus aureus (MRSA) infections. MRSA infections have become more common and more difficult to treat over the past few decades.

“My lab is looking to challenge a lot of old ideas about staph,” said Dr. Alonzo. “We are trying to identify the factors that make staph so powerful and understand how it is able to make the immune system unable to figure out it’s there.”

Dr. Alonzo came to Loyola in 2014 after completing his PhD at University of Illinois at Chicago (UIC) and postdoctoral work at New York University (NYU) School of Medicine. While at UIC he studied the pathogenesis of listeria, and NYU was where he started investigating Staphylococcus aureus under the mentorship of Victor Torres, PhD.

“While I was at NYU it allowed me to see how a young scientist works and sets up his lab,” said Dr. Alonzo. “It helped me figure out what I was interested in and what I wanted my career as a researcher to look like.”

Since he started his research, Dr. Alonzo has found that toxins released by Staphylococcus aureus are able to disarm the immune system in different ways. Some even poke holes directly into the cells that ward off bacteria, causing them to explode and become unable to fight off infection.

His research has also identified the cellular receptors on host cell surfaces that some of these toxins use to find their targets in the immune system.

Staphylococcus aureus can also mutate easily, another reason why it’s so resistant to antibiotic treatment.

“There are so many things about this bacterium to explore, it is so pervasive,” said Dr. Alonzo. “It colonizes us all the time, and all it takes is it being at the wrong place at the wrong time to become a really serious illness for someone.”

Dr. Alonzo is hoping his research will eventually lead to new therapeutic treatments for staph and MRSA infections that work differently than antibiotics and are more effective. He is looking at ways to use the power of the immune system to fight Staphylococcus aureus, much like how immunotherapy treatments are using a person’s immune system to fight certain cancers.

Dr. Alonzo’s work is funded by the National Institutes of Health. He has published more than 30 peer-reviewed publications about bacterial pathogenesis. In 2016, he was named Faculty Member of the Year by the graduate student body in the Stritch School of Medicine.

“The science is what I love doing. It is humbling to be recognized for that and it is exciting to feel that I am contributing to all the great science happening here at Loyola,” said Dr. Alonzo.