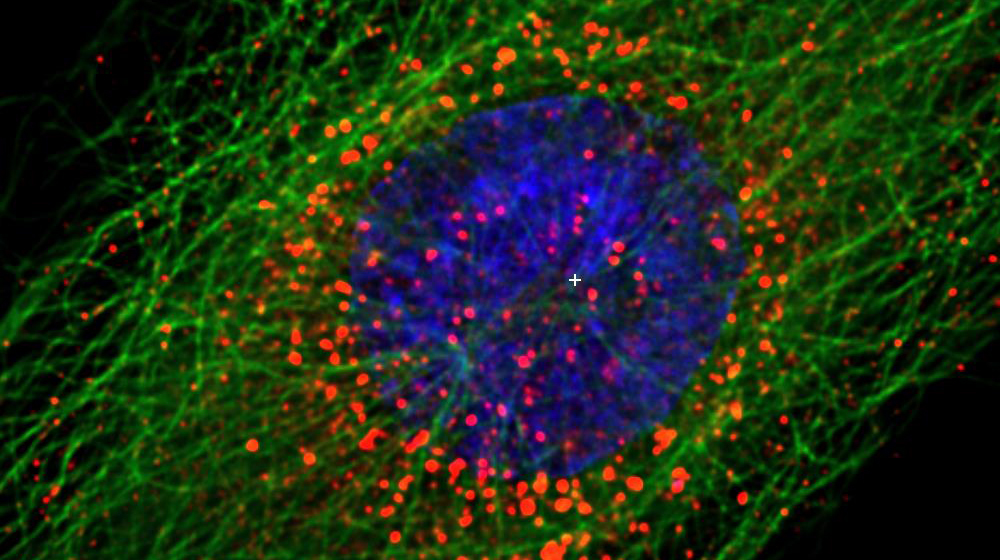 Loyola University Chicago scientists have solved a mystery that has long baffled HIV researchers: How does HIV manage to enter the nucleus of immune system cells?

The discovery, reported in the journal PLOS Pathogens, could lead to effective new drugs to treat HIV/AIDS, said Edward M. Campbell, PhD, corresponding author of the study. Campbell is an associate professor in the Department of Microbiology and Immunology of Loyola University Chicago Stritch School of Medicine.

HIV infects and kills immune system cells, including T cells and macrophages. This cripples the immune system, making the patient vulnerable to common bacteria, viruses and other pathogens that usually don’t cause problems in people with healthy immune systems.

Once HIV enters a cell, it has to find a way to get inside the nucleus, the compartment that contains the cell’s DNA. Many related viruses do this by waiting until the cell divides, when the protective membrane surrounding the nucleus breaks down. But HIV has the insidious ability to enter the nucleus in a non-dividing cell with an intact nuclear membrane. (This membrane also is known as the nuclear envelope.)

Campbell and colleagues discovered that a motor protein, called KIF5B, interacts with both the HIV-1 core and the nuclear pore in a way that allows HIV into the nucleus. Normally KIF5B transports various cargoes within the cell, away from the nucleus. But HIV hijacks KIF5B to serve a different purpose: It induces KIF5B to tear off pieces of the nuclear envelope and transport them away from the nucleus, thus making the pore wide enough for HIV to pass through. (The pieces that are torn off are proteins called Nup358.)

The discovery opens a potential new strategy for fighting HIV. Developing a drug that prevents KIF5B from disrupting nuclear pores would prevent HIV from sneaking into the nucleus without detection. This would give the immune system enough time to sound the alarm to attack and destroy HIV.

Cells have surveillance mechanisms to detect viruses, and their DNA, in the cytoplasm (the part of the cell outside the nucleus). But HIV typically can enter the nucleus before it is detected by these mechanisms. Trapping HIV in the cytoplasm would not only prevent an infection, it might also lead to HIV being detected and thus prompt an immune response.

“It’s like making a bank vault harder to break into,” Campbell said. “In addition to making the money more secure, it would increase the chance of sounding the alarm and catching the burglars.”

The study was supported by a grant from the National Institute of Allergy and Infectious Diseases. It’s titled “KIF5B and Nup358 cooperatively mediate the nuclear import of HIV-1 during infection.”