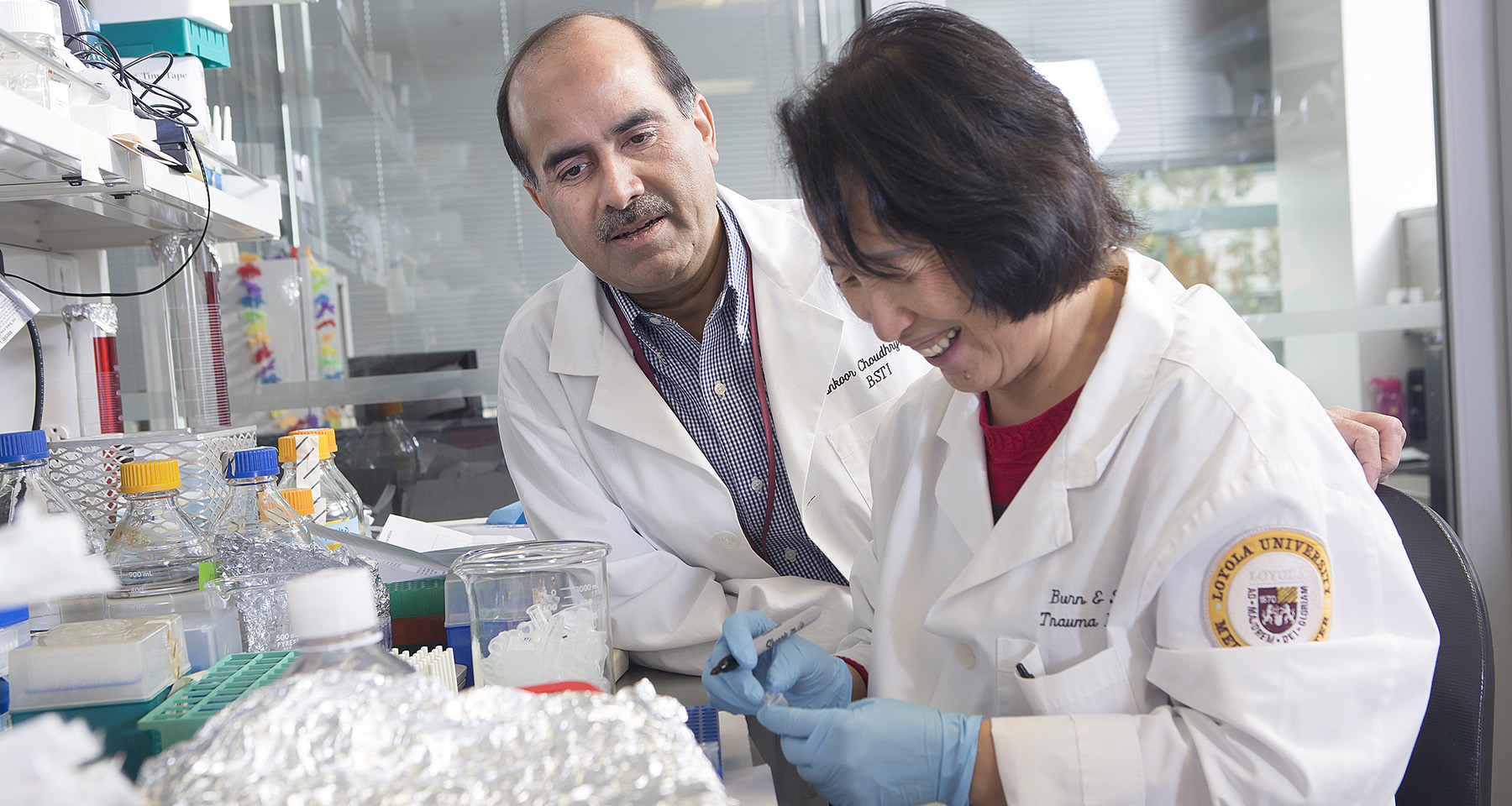 Alcohol is well-known for being the culprit behind many chronic illnesses: liver disease, cancer, pancreatitis, gastrointestinal issues, and more. Alcohol is also commonly the cause of traumatic injury—from car crashes to physical violence. When you’re the victim of trauma or burns, having alcohol in your system can have a more serious effect than you think.

Mashkoor Choudhry, MPhil, PhD, professor in the Department of Surgery and director of the Alcohol Research Program in Loyola University Chicago’s Stritch School of Medicine, has been studying the role of alcohol in burn complications for more than 20 years. For his work, he was given the Senior Scientist of the Year award, presented at the annual St. Albert’s Day research celebration.

In his lab, Dr. Choudhry and his team are studying the hypothesis that being exposed to alcohol increases the suppression of the immune system of the intestines and breaks down their natural barriers, eventually causing sepsis (blood infection) and multi-organ failure. His research could be key in coming up with new treatments for people with these specific injuries.

“We seem to see an increase in bad bacteria in the gut microbiome as a result of a burn or alcohol-related trauma,” said Dr. Choudhry. “And during a trauma, it’s much easier for the gut bacteria to escape the lining of the intestines and get into the bloodstream, which leads to sepsis.”

Dr. Choudhry’s interest in this research began when he noticed that patients who were under the influence of alcohol at the time of injury were more susceptible to infection and had poorer outcomes compared to those who were sober at the time of a trauma.

Using laboratory models, he has found that the combination of alcohol and a burn trauma specifically, increases the suppression of an immune function in the gut, which keeps the lining in our intestines intact.

When that barrier breaks, bacteria that live in the gut can leak out and get into the blood stream. This can result in severe infections, sometimes sepsis. Sepsis is when the body releases a flood of chemicals to fight an infection and cause widespread inflammation, leading to blood clots, poor circulation, and leaky blood vessels. Sepsis can quickly turn into organ failure and can be deadly.

Residents and postdoctoral fellows working in the Alcohol Research Program are also part of a National Institute on Alcohol Abuse and Alcoholism T32 training grant, led by Dr. Choudhry. This grant involves training in the neuroimmunoendocrine effects of alcohol, or how it effects the communication between the nervous system, the immune system, and the endocrine (hormone regulating) system.

“Alcohol is a major problem, and there are a lot of diseases that come from abusing it,” said Dr. Choudhry. “This grant allows trainees to study mechanisms behind how alcohol is influencing those diseases.”

Dr. Choudhry has published more than 180 articles including review articles and book chapters. Dr. Choudhry has presented his research at various national and international meetings and is a member of NIH research review panels as well as on the editorial board of a number of scientific journals.

“To have come to Loyola as a young trainee and then be honored like this by my colleagues, I’m very humbled and honored,” said Dr. Choudhry.