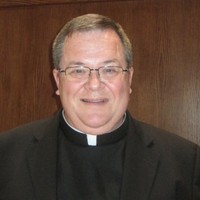 The Rev. William Corcoran (PhD 2003) made front page news to start the new year. The headline of the Chicago Tribune on 17 January 2021 blared “Priest speaks out about Trump. Some parishioners walk out.” Reporter Mary Schmich went on to describe Fr. Corcoran’s homily addressing the meaning of the deadly insurrection and attempted coup d’etat of 6 June 2017 in Washington, D.C. Fr. Bill, as he is affectionately known, was a PhD candidate in the Department of History from 1997 to 2003, specializing in American urban history, while simultaneously serving as an associate pastor at St. Margaret Mary parish. His dissertation “Imagining a Future: The Reassertion of Irish Identity in Chicago, 1946-1990” focused on the re-configuring, re-emergence, and re-assertion of Irish identity in Chicago in the Post-World War II period, as well as the post-war immigrant’s story of immigration and settlement.

Fr. Bill was raised in Chicago, attended Little Flower Grade School from 1962 to 1969, and studied at the University of St. Mary of the Lake where he earned his Masters of Divinity (1981) and Licentiate in Sacred Theology (1983). Before attending Loyola, Fr. Bill served as Dean of Formation at Archbishop Quigley Seminary from 1992 to 1997 where he was responsible for all programs that developed student spirituality. After completing his PhD, Fr. Bill was named pastor of St. Linus Parish in Oak Lawn (2001-13) and then St. Elizabeth Seton Parish in Orland Hills (2013-present). He was named a Dean for the Archdiocese of Chicago in 2016.