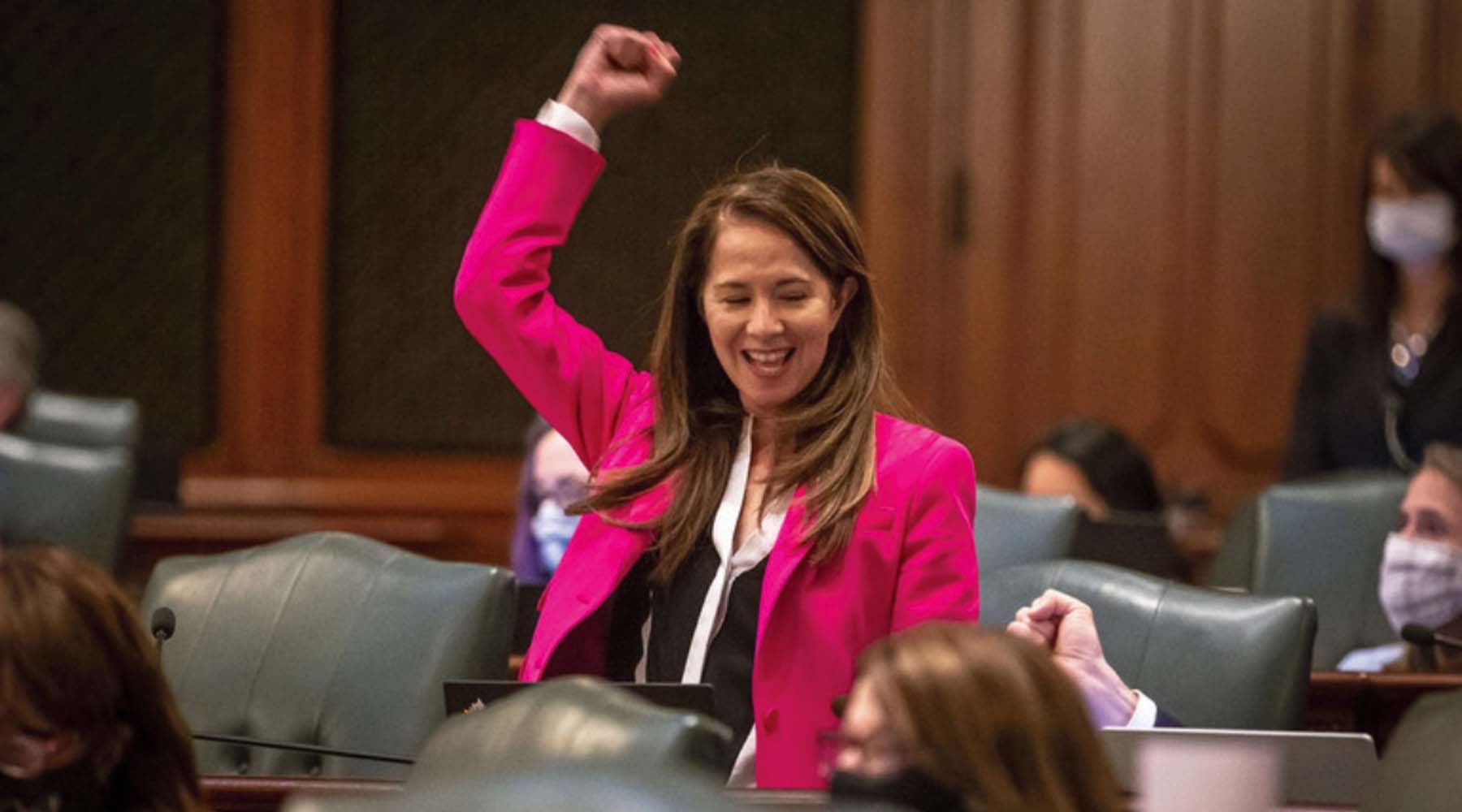 Illinois State Representative Jennifer Gong-Gershowitz (JD ‘96) never planned to go into politics. “Politics is not something that I sought out as an end in itself,” she says. “It’s something that was a natural extension of the work that I had been engaged in over two decades.”

Over years of immigration litigation, pro-bono work, and directing the immigration practice at the North Suburban Legal Aid Clinic, Gong-Gershowitz built her career on advocating for the voiceless. When an Illinois House of Representatives seat opened up in 2018, it presented an opportunity to shift from defending the laws to creating them.

Today, Gong-Gershowitz is a member of the Illinois House of Representatives, as well as the first Asian American chair of the Judiciary Civil Committee. In 2021, she sponsored the Teaching Equitable Asian American History (TEAACH) Act, making Illinois the first state in the nation that requires public schools to include Asian American history in their curriculums. Here, she discusses a lifelong history of advocacy and why representation is so important.

What attracted you to law school?

I grew up in a family with a tradition of advocacy. My mother was active in the women’s movement. My father participated in the vanguard of the civil rights movement. I grew up with parents who saw themselves as participants in the small-d democratic process. For as long as I can remember, I was drawn to learning the tools to be an effective advocate. It occurred to me early in life that the legal profession offered the opportunity to utilize professional skills to be an advocate. So, in the early years of my legal career, I practiced on the civil side doing mostly corporate litigation. I immediately, as a first-year lawyer at Winston & Strawn, developed a strong pro-bono parallel practice in immigration, representing unaccompanied immigrant children seeking asylum. I was utilizing my legal skills to advocate for those who didn’t have a voice.

I was born and raised in the Chicago suburbs and knew Loyola [University Chicago School of Law]’s reputation for excellence in not only legal training, but in particular, a lot of really prominent trial lawyers practicing in Illinois are Loyola graduates. I always knew that I wanted to be in a courtroom.

“We can’t possibly hope to have a better understanding of one another without the opportunity to learn about one another. The TEAACH Act was fundamentally about building empathy.”

The TEAACH Act is the first legislation in the nation to require Asian American history to be taught in public schools. Why is this so important?

I am third-generation Chinese American on my dad’s side. I’m half Chinese, half Irish, Jewish by choice. As a graduate of Illinois public schools, I had always been aware of our invisibility in the classroom. There has been a need to include Asian American history—which, of course, is American history—in our curriculum for a long time. Representation matters. Up until 2016, there were zero Asian Americans in the Illinois General Assembly. With my election in 2018, we went from one to two out of 118 members of the Illinois House.

What inspired the TEAACH Act in 2021?

The last year and a half we have seen a shameful rise in anti-Asian hate and violence. Stereotypes and misinformation come from a lack of knowledge. The best weapon against ignorance is education. We can’t possibly hope to have a better understanding of one another without the opportunity to learn about one another. This was a moment to make sure that we address invisibility and exclusion with education. For me, the TEAACH Act was fundamentally about building empathy. I was very proud to see bipartisan majority support for the TEAACH Act in Illinois. And yes, I think a lot of people were surprised to see Illinois lead on this issue. A lot of times, we see legislation like this come from the coasts. But Illinois became the first, and I’m incredibly proud of that. –Megan Kirby (December 2021)

Let's get started with the JD process

Loyola’s powerful learning environment, rooted in our Jesuit identity, is a professional inspiration for our graduates. It’s why employers seek out our graduates and why many graduates rise to the highest levels of leadership in public service and the private sector. Ready to join our community of doers, thinkers, and leaders? We’ve outlined the steps and deadlines for you. Let's get started