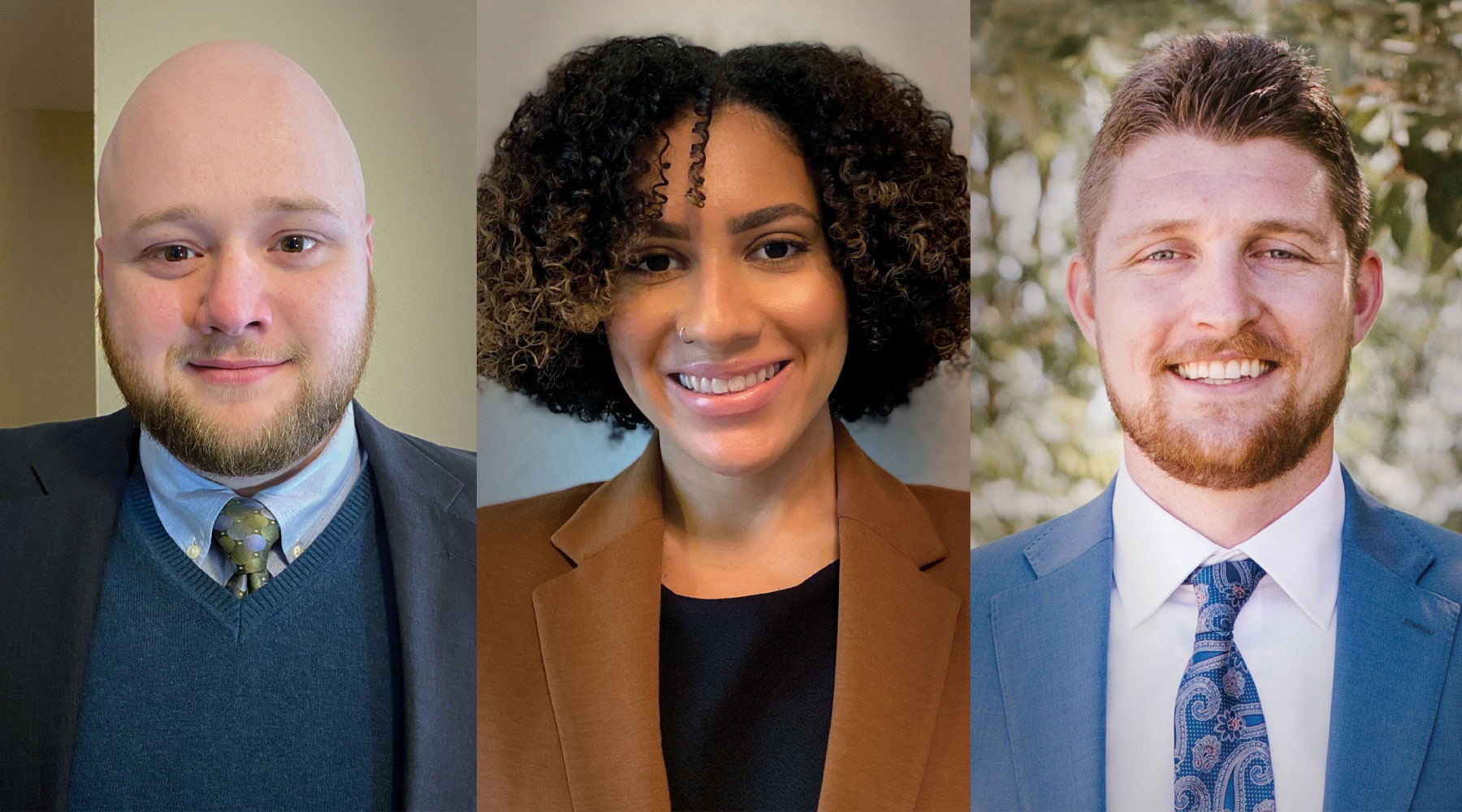 Some people grow up dreaming of becoming lawyers. But sometimes, the path to legal work isn’t so clear-cut. For these three students—Joyce Mendoza Navarro, Carrick Meyers, and Ian Lindsay—law school came after working in other fields. Here, they discuss their lives before law school, and how their unique backgrounds transfer to their work at Loyola University Chicago School of Law.

The Science of Law

After earning a degree in cellular and molecular biology, Joyce Mendoza Navarro began studying neuroscience as a predoctoral fellow at New York University, working at research labs in New York and Seoul, South Korea. Then Hurricane Maria changed everything.

Navarro grew up in Puerto Rico and was living on the island when the hurricane hit. After witnessing the destruction and its aftermath, she rethought her path. “I didn’t have enough power or influence with a degree [in science],” she says. “I wanted to have more of an impact in helping people from marginalized communities.”

She enrolled at Loyola in 2020 and found law school’s intensity surprisingly familiar. Thanks to her biology background, she was no stranger to dense research, reading, and writing. She’s pursuing a career in environmental law with a focus on public health.

In 2021, she became a Corboy Fellow and began training to compete in mock trial, where her scientific brain gives her an advantage. “As I’m coming up with an argument, I can look at the facts and think of all the ways someone can try to disprove it,” she says. “That’s what science is, right? You’re trying to prove your thesis.”

in health law according to US News & World Report

in advocacy according to US News & World Report

‘“I wanted to have more of an impact in helping people from marginalized communities.”

During a decade working in healthcare, Carrick Meyers found himself drawn to the regulatory and compliance side of things. As the manager of several senior living facilities, he witnessed how health care policies affected the kind of care patients received.

Meyers started to wonder: Would his pull toward policy work make him a good law school candidate? He reached out to his dad, who practiced as an attorney for 15 years. “I’ve always loved working with regulations, reading, problem-solving, having to dive in and figure out what something’s really saying and how it all ties together,” he says. “So, I called my dad and asked, ‘Is this what attorneys do?’”

Meyers found studying for the LSAT fun, which felt like a good sign. Loyola’s Health Law program fit his background and goals. Plus, Loyola’s financial aid package and friendly atmosphere made him feel welcome.

Today, his career experience often helps in the classroom. Recently, a professor urged everyone in the class to research certificate of need, a legal document required to expand healthcare facilities. “I already know what that is!” Meyers remembers thinking.

Overall, Meyers wants to pursue health law to reshape the policies he encountered in the field. “Ultimately, the policy that’s in place dictates how we have to provide medical care,” he says. “Health law is important because even though it’s on the back end, it has a significant impact on the frontline care that is provided—who can get care, and how they can get care."

During his theater career, Ian Lindsay performed at summer stock productions, joined a touring company, trained at Chicago’s ImprovOlympic, and even tended bar at the famous Second City—the perfect spot to meet fellow performers. But he felt unsatisfied by the day jobs required to support a performing career.

Then he sat on a civil trial jury at the Daley Center and saw talented lawyers take the floor. “What stood out to me was that these people were storytellers,” he says. “I always thought of myself as a storyteller.”

He wondered if he was cut out for law school, so he got a job at a law firm specializing in property tax appeals—and he loved the work. Litigation and trial advocacy sounded even more interesting. Plus, he was already in Chicago; Loyola’s School of Law beckoned.

In 2021, he became a Corboy Fellow and brought his skills to Loyola’s mock trial team—a different kind of performance than the theatrical stage. He’s keeping an open mind about jobs after graduation, but he knows he’d like to work in litigation. “Even when you’re not in the courtroom, there’s a certain performance to going out there and talking to someone, and trying to get something on their behalf,” he says. “All the world’s a stage, I guess.” –Megan Kirby

Meet other students and alumni

The Dan K. Webb Center for Advocacy supports a wide-ranging curriculum in trial advocacy, appellate advocacy, and dispute resolution. With over 100 students competing on advocacy teams each academic year and 200+ talented attorneys volunteering as coaches, see why Loyola graduates are among the most effective trial, appellate, and dispute resolution lawyers in Chicago and across the country. Learn more