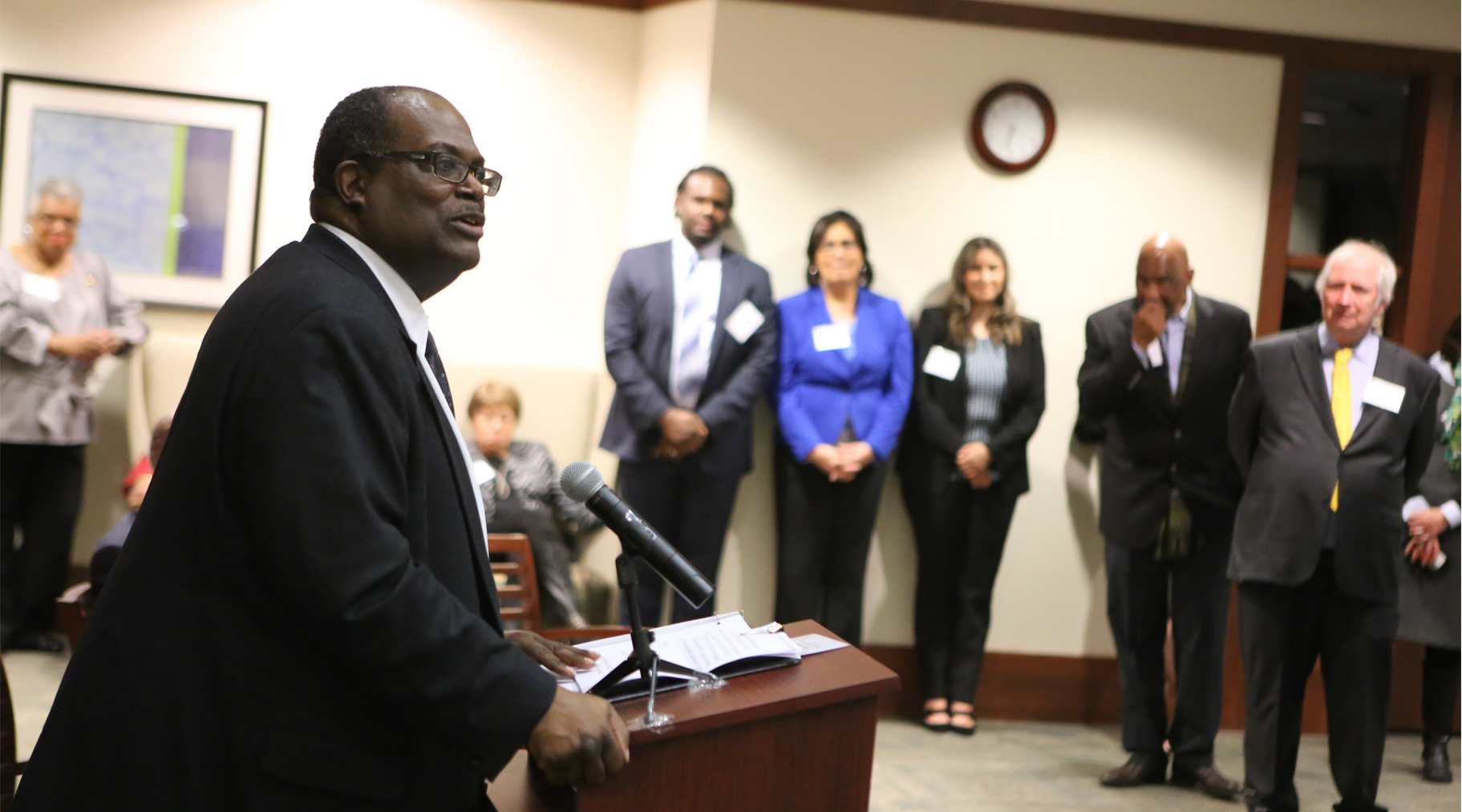 “I’m a big believer in mentoring and finding ways to give back,” says Professor Neil Williams.

Born in Jacksonville, Florida, Nathaniel R. Jones Jr. Professor Neil Williams grew up in 1960s’ Atlanta during the tail end of Jim Crow and amidst the civil rights movement. His mother was a third-grade teacher who had a master’s degree in education. His father, one of the first licensed Black veterinarians in the state of Georgia, treated the pets of many civil rights pioneers, including Dr. Martin Luther King Jr.

“When Dr. King was assassinated, I still remember it,” says Williams. “My father and mother both marched in the funeral procession. My father actually issued the veterinary certificates for the two mules who were pulling Dr. King’s casket.”

Williams remembers the injustices of segregation well—from having to drink out of separate, less sanitary drinking fountains to being kept out of advanced classes in school. “Even though Brown v. Board of Education had been decided back in ’54, the South was very slow in implementing integration,” he says. “I was in segregated elementary schools part of the time.” Williams went on to become the first Black valedictorian of his integrated high school and received a partial scholarship to attend Duke University, where he graduated summa cum laude. Director of Communications Kristi Turnbaugh talked to Williams about why he chose to study law over English, introducing Barack Obama to Michelle Robinson, and his “step” method of teaching.

Why did you attend law school?

I really enjoyed English, reading texts and interpreting texts—because that’s the heart of what takes place in a good English class. Always in the back of my mind was, “Wouldn’t it be great to be an English professor?” But people said, “You can’t do that because there are these stories of English PhDs driving cabs. You need to do something more practical.”

So I thought about law school, and I began reading about lawyers and, of course, I’d heard stories of Thurgood Marshall and all the great lawyers of that period—people like Dr. King who spearheaded the enactment of the ’64 Civil Rights Act and the ’65 Voting Rights Act. They were heroes.

There was one book in particular that enchanted me, Simple Justice by Richard Kluger, which details the history of Brown v. Board of Education, including the pivotal role played by Charles Hamilton Houston, Thurgood Marshall’s mentor. I knew then that law was definitely the path.

What were your first law jobs?

I clerked for Judge George Leighton for two years in federal district court. He had been actively involved in the civil rights movement, and I loved the way he approached his job. He was very much interested in doing justice and being fair to people. Then I started practicing at Sidley & Austin for five years, but in the back of my mind, I knew I always wanted to be a law professor. When I was in practice, I wasn’t spiritually fulfilled.

When you worked at Chicago firm Sidley & Austin in 1989, you were the one who introduced law student Barack Obama to attorney Michelle Robinson?

Michelle was supposed to be his mentor for the summer program. They talked over the phone, but they hadn’t met face to face yet. I happened to be in the room having a conversation with Michelle when Barack walked in. So I was the one who got to say, “Michelle Robinson, this is Barack Obama.” The first time they’d ever laid eyes on one another. And Barack’s eyes in particular, I’ll never forget, they were like stars. You could tell that he was immediately smitten. If there’s such a thing as love at first sight, I witnessed it.

I’ll never forget that. I always like to say that my contribution in that moment was that I sent vibes out into the air directed at Michelle, saying, “Give Barack a chance.” Who knows if I hadn’t been there sending out those vibes what might have happened.

‘“What excites me most about being at Loyola in this moment is the change we made to our mission statement to show the earnestness of our commitment to being an anti-racist law school.”

You started teaching at Loyola School of Law in fall 1989. Who inspired you in the early days?

I came in at the time Norman Amaker was on the faculty. I spent ten years under the stewardship of Norman, [who had done] groundbreaking work with the NAACP Legal Defense Fund and represented scores of civil rights activists who were arrested and harassed by the police, including Dr. King. Norman also argued critical civil rights cases before the Supreme Court. He was a legend, and it was my honor to be mentored by him. I try to sustain his values here at Loyola well into the 21st century.

You’ve been the faculty advisor to Loyola’s Black Law Students Association (BLSA) for more than 30 years. What makes it so fulfilling?

I’m a big believer in mentoring and finding ways to give back. There are people who’ve touched my life along the way who made it possible for me to be in the places where I was, and I’ll always have a deep and abiding gratitude for the generosity of spirit. And I’ve tried to emulate them by paying it forward.

I encourage our alumni to find ways to give to the students. We’ve had so many graduates do that. For example, the BLSA Thurgood Marshall trial program. We’ve had alumni come back and mentor our students. Loyola has some of the best competition programs in the country, partly because of our strong alumni involvement.

What are some unique ways you teach students?

I joke to the students about lawyers being steppers—stepping as the form of dance music that’s particularly popular on the South Side that involves some intricate steps. But like all dancing, you have to do the right step at the right time.

For example, when a judge is about to go into an argument and he’s looking through a brief, you have to remember that the judge has countless other cases and it might be an area of the law that the judge hasn’t seen for a number of years. So you don’t write the brief in a way that assumes the judge knows everything. You start with step one and go through all the various steps at the most basic level. You explain the facts. You explain the law and the application of the law in ways so that a busy judge who might only have two minutes to skim your brief before a court session sees the essence of your argument. I think that’s a skill all good lawyers have to have, and it’s a skill I take seriously. By using what I call the step method, students understand the whole process of the law much better.

What is your proudest moment at Loyola?

If you look at American education now, it’s still largely segregated. There are a few pockets here and there where you might have a school with genuine levels of integration, but at a number of schools, however, the presence of people of color is only token…which makes it all the more important that we create a diverse atmosphere here at Loyola.

Law school can be the first time students have interacted with people with other backgrounds in significant numbers, so you can get the sort of exchange that’s needed in a great law school, that’s needed in a great society. People get to know each other as human beings. I’m still a big believer that that’s one of the best ways to stifle racism, even when racism is systemic and institutional and structural. When people understand the history, when they know human beings from different backgrounds, then when they get in these institutions, they have the tools they will need to change those institutions to be more genuinely inclusive. And that’s what we’re trying to do at Loyola.

What excites you most about being at Loyola at this moment?

What excites me most about being at Loyola in this moment is the change we made to our mission statement to show the earnestness of our commitment to being an anti-racist law school. It will call on all of us to broaden our horizons, broaden our thinking, and open our minds—and I’m really excited.