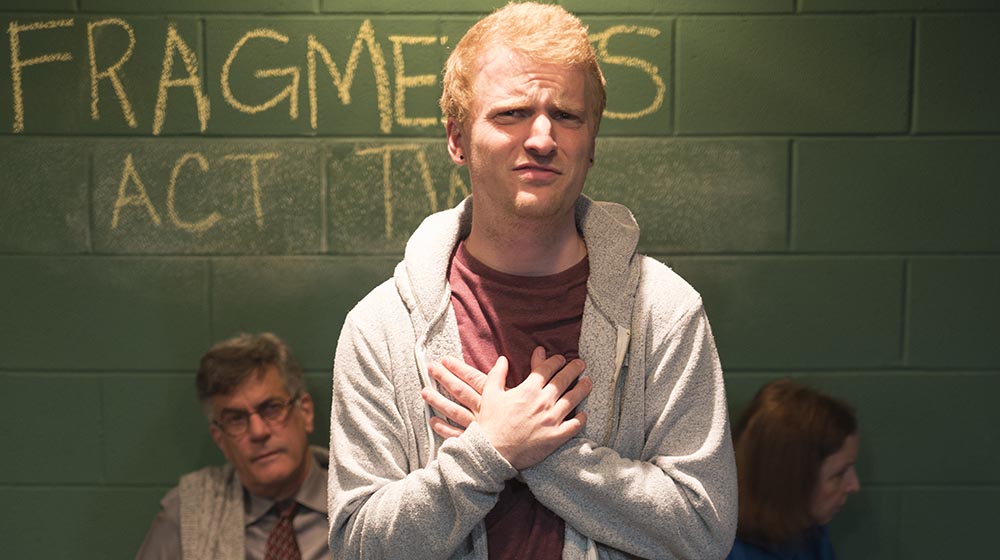 It’s hard to have a conversation about theatre without speaking about social justice–especially at a Jesuit school. At Loyola, theatre students are of course taught to perform, direct, design, and stage manage. But underneath it at all, Loyola’s rising stars learn about theatre as both entertainment and a powerful tool for social change, one that not only reflects society but provides a platform and outlet for diverse community voices.

Ryan Stanfield (BA ’15), Amy Heller (BA ’15), and Warren Swartwout (BA ’15) took this message to heart when they founded the new CityWorks Theatre Company. During late night conversations in coffee shops, they discussed their common interest in using theater to help struggling communities. “We wanted to create theatre that gave back to communities in a more tangible way,” says Swartwout, managing director of CityWorks.

The group decided they wanted to not only make art that centered around social justice issues but help those already doing work in the community. They would produce plays that spoke to specific social concerns, while partnering with relevant groups committed to fighting for change. Part of the proceeds from each production would go to each organization, impacting them in not only an artistic way, but a financial one. “We wanted to work with organizations to bridge the gap between art and community engagement,” Swartwout says.

With these goals in mind, the artists developed their mission statement: “CityWorks engages audiences in shared experiences to create social change. Viewing theatre as a civic responsibility, we are committed to partnering with community organizations and providing a platform for diverse voices in Chicago."

Though the three had internships, acting, and directing experience between them, they knew that building a theatre company from the ground up was a challenge they hadn’t faced before. Producing a play requires an incredible amount of resources: space, equipment, actors, and designers. But that didn’t deter them. “We broke the whole process down into smaller steps,” says Heller, the group’s director of community outreach. “We’re all busy people, but we sort of kept riding on the idea that the only thing that could get in our way was ourselves. We had to keep the momentum going.”

Fortunately, they weren’t alone. Their mission to help communities through theatre struck a chord inside the Loyola community and out. After starting a crowdfunding page, the group received overwhelming support and quickly met their fundraising goal. But that’s not where the help ended. Loyola’s theatre faculty, impressed by the goals of the recent graduates, offered them Mundelein’s Underground Laboratory Theatre over the summer. With a space locked down, the young company was on its way to producing its inaugural play. The question then was: which one?

Knowing that the first production would set the tone for later ones, the three spent weeks reading plays, even hosting readings in living rooms with friends. Eventually they settled on Fragments, an experimental piece by recently-deceased playwright Edward Albee. The play’s unconventional plot features eight strangers opening up to each other by telling stories, examining the ways in which people connect to one another.

“Fragments felt very foundational for the type of theatre we wanted to create,” says artistic director Stanfield. “Although it was written over 20 years ago, its themes of community, identity and sharing stories resonated deeply with us and hopefully with our audiences as well.”

The play felt especially relevant in a time when people with diverse ideas and backgrounds often have difficulty finding common ground. “The narrative of eight people all coming into a shared space and finding commonalities with one another is an increasingly rare occurrence, especially in the current climate of polarized and political divides,” Stanfield says.

The group partnered with Howard Area Community Center (HACC), a Rogers Park nonprofit that assists low-income families in the neighborhood through a variety of services including adult education, employment assistance, after school activities, support groups, and health services. The organization was chosen for its crucial work in the community in and around Loyola. One local HACC member designed music used in the production of Fragments, and CityWorks artists coached young performers for a spoken word poetry event held at the HACC. “We wanted to not only donate to the organization but involve members as much as we can in the artistic process of it,” says Heller.

Performances of Fragments ran from late August to early September, with design and stage management by other recent Loyola grads. Swartwout and Heller joined other actors of diverse ages and backgrounds in the cast while Stanfield directed. After a successful run, they donated half of the proceeds from their ticket sales to the HACC.

Now, the group is focusing on growth and developing a plan for the coming season. In the short term they plan to focus on smaller projects, like staged readings. “We learned a lot from producing Fragments,” says Stanfield. “Now, we’re focusing on growing our team to accomplish what we want to do as an organization and as theatre makers.”