Making a difference in health care 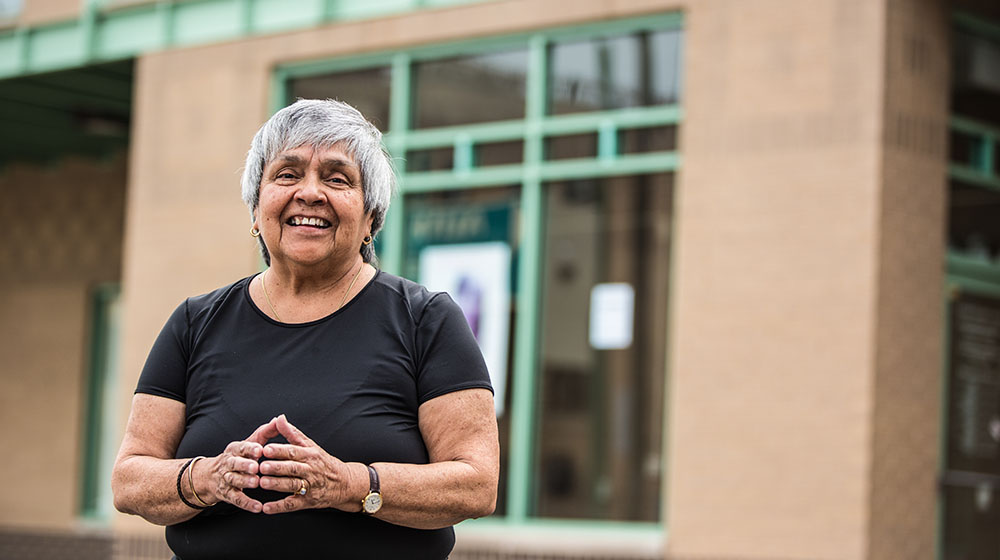 It was 1987, and Carmen Velasquez (BS ’63) saw that Chicago’s Pilsen neighborhood needed a community health center. Many individuals and families were uninsured or undocumented, or faced language barriers and were simply not receiving the health care they needed. “There was a clinic on 17th and Ashland,” Velasquez says. “But so many people needed care that there was a waiting list of about four to six months, which is not acceptable—and the staff were not Spanish-speakers, nor bilingual and/or bicultural. So I decided to do something about it.”

Velasquez, a former community activist, social worker, and educator, had no medical background. In spite of this, Alivio Medical Center, a federally qualified, bilingual, nonprofit community health center, opened its doors on Western Avenue in 1989. For 26 years it has been serving its Latino, predominantly Mexican, neighborhood, and the working poor, uninsured, and immigrant communities.

Velasquez’s first move toward opening Alivio was to identify people who were equally passionate about the cause. She called on her friend Ann Garcelon, MD, an internist who was on staff at Mercy Hospital. The two of them approached Sr. Sheila Lyne, then the CEO of Mercy Hospital and Medical Center. Sr. Sheila had been looking for ways to improve health care for the Mexican community but hadn’t found the right partners. Velasquez needed someone who would sit at the table and see the process through to the end. As Sr. Sheila stated, “The rest is history.”

“I said, ‘I’m looking for a partner who is really going to be a hands-on person,’” Velasquez says. “When I make calls to Mercy, I want them to know that the CEO of this institution embraces the purpose of our collaboration.” Sr. Sheila said yes, becoming an integral part of Alivio’s foundation. Velasquez and her partners began to define what they wanted Alivio to provide.

“We wanted a comprehensive community health center,” Velasquez says. “We wanted access to health care for all, we wanted immigration reform, and we wanted to address the lack of bilingual and bicultural health professionals—not only physicians and nurses, but also social workers and case managers. The questions on the table were, ‘How many fluent Spanish-speaking speech therapists do you have in the public schools? How many fluent nutritionists in the Department of Health?’ The need was great and we wanted everything.”

Velasquez and her partners put their vision on paper, and they secured a $989,000 grant from the Chicago Community Trust for operations. But they still needed a space, and so they went in search of it on foot.

“We went from door to door asking about properties,” Velasquez says. “As we were heading north on Western Avenue, I saw a property that said ‘Velasquez Muffler Shop,’ so I thought to myself, providencia divina, divine providence! I do believe in that. To make a long story short, we went back to our core group, and at the end of the day, we bought that land, furnished it, and opened our door for service on January 4, 1989. We raised $2.2 million to do that.”

If  Velasquez and her partners underestimated one thing, it was the demand that patients would have for Alivio’s services. The patient list at the health center on Western Avenue grew so rapidly that Alivio had to look for a new site. The second, and larger, Alivio community health center opened in Pilsen in 2000. A third freestanding clinic opened in Cicero in 2008, and there are three school-based health centers in the Alivio network. In March of this year, a new facility opened in Berwyn, and another school-based center in Benito Juarez High School is about to open.

Alivio serves nearly 27,000 patients annually, regardless of ability to pay. Many of Alivio’s patients receive vital services—such as primary care, prenatal care, dentistry for children, and health education—that they would otherwise struggle to afford, or not receive at all. The center also hosts community health fairs and classes, and the in-house pharmacy provides reduced-cost medication. Alivio’s bilingual, bicultural providers create a welcoming and respectful environment for their patients and at the same time provide cost-effective and high-quality care.

“Part of our whole goal was that we wanted that commitment to advocacy,” Velasquez says. “If you look at what we developed, there’s an incredible involvement with and commitment to the communities we serve. It’s not only primary care and health education; it’s all the things that impact our patients’ quality of life on a day-to-day basis. As we say on our business cards, we have an active presence for a strong community. We are ever-present.”

Velasquez has received numerous awards for her tireless advocacy, and will be honored with the Damen Award at Loyola’s Founders’ Dinner this coming June. In 2013, Illinois Governor Pat Quinn proclaimed October 2 “Carmen Velasquez Day” throughout the state.

Velasquez retired in March of this year. Among the things she plans to do in retirement is advocate on behalf of the immigrant community seeking inclusion in the Affordable Care Act.

After a long career of advocating for the underserved and fighting for access to health care, Velasquez gained valuable insights about how to get things done.

“First, you have to have the passion and that fire in your belly to go after something,” she says. “Second, you can’t let anybody drive your car. I knew where I wanted to go, and I knew also where I didn’t want to be taken. But you don’t do it by yourself. You do it with a staff and board who support the day-to-day operations, with stakeholders who support the services we provide, and a core group of people who believe in the mission and have the same passion to do what is right.”

Thanks to Velasquez and those who work at Alivio, tens of thousands of people have access to affordable, respectful health care.