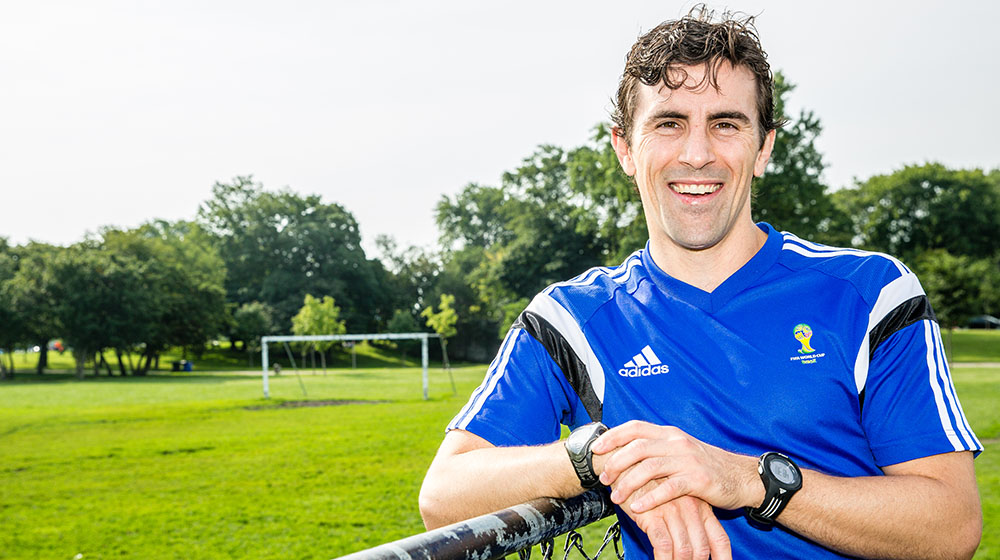 For soccer referees, participating in the World Cup is the pinnacle of achievement. Only three referees were chosen to represent the United States during this summer’s World Cup in Brazil. Eric Boria (MA ’02, PhD ’06) was one of them, going as a reserve assistant referee. It was the culmination of years of training and study, including three years of FIFA training that specifically develops prospective World Cup candidates.

Boria’s path to the World Cup started at the age of 13. He took classes with his father, an avid soccer fan, to become a referee.

“Soccer’s been in the family for a long time,” Boria says. “We followed the Italian league. A game at 3 in the afternoon in Italy was at 8 in the morning here. We’d travel to Stone Park, IL, [from Hammond, Indiana] where a radio station had a satellite feed. We’d sit in the technical room in the back and watch the game on a little black-and-white screen.”

Boria continued playing and refereeing soccer through college, at which point he became a professional ref and had to forgo playing—it was too easy to get injured. About seven years ago, he decided to get more serious about his refereeing career, so he applied his academic research skills. He studied the physical, mental, and sociological aspects of the game.

“I started studying nutrition, physiology, and how to improve physical performance while lowering the risk of injury,” Boria says. “I studied the game and how it’s played in different countries. Knowledge about a culture and how people use gestures is very helpful. I’ve also been studying psychology of players and referees. That’s helped me just as much as studying the game and physiology.”

In 2012, Boria was identified as a World Cup referee candidate. This began a program of intense physical and mental training and assessment.

“We were assigned a fitness trainer who gave us a training plan to be completed daily,” Boria says. “We reported back our heart rate monitor data showing that we completed the exercise, how we felt, and any treatments. FIFA contracts a clinic in Zurich [Switzerland] where a doctor monitors our progress, status, and health.”

The idea is to increase aerobic capacity so that the referee peaks in time for the tournament.

In training, Boria studies every aspect of his athletic performance.

“I use a heart rate monitor during both workouts and games. I use GPS to get distance data. A lactic acid test shows how well I’m recovering. A sweat test shows your level of electrolytes,” Boria says. “By putting all that information together, you can adapt your training so that during the game you never really get to that level of fatigue. Because when your body’s at a high level of fatigue, the first thing that goes is the thought process.”

The thought process is the part of the job that truly fascinates Boria. A good referee, Boria says, knows how to be in the right position to get the most data, knows how to interpret that data, and also knows what extraneous data to push aside.

“You have to know whether the data you input into your head are trustworthy or untrustworthy,” Boria says. “There’s the moment you hear contact with the ball, and the moment you see it. But there are also other data that you don’t want to focus on. There is sun in your eyes. On May 9, in Denver, we had a game in the middle of a snowstorm. You have to focus through the snow, not on it—on the shapes moving through it.”

Boria uses computer programs that are specifically designed to improve concentration and focus. One program tests peripheral vision and awareness by testing recall of a letter and object that are flashed onscreen for only a tenth of a second. He also watches videos with simulated game situations where he has to make a decision in real time.

“What happens is that the subconscious can process a whole lot more information than the frontal lobe can,” Boria says. “Referees talk about having a feeling for the game. You can feel a foul, feel it’s a red or yellow card—and that comes from being in the right position. Your subconscious tells you what the right answer is. But it takes a lot of training to get that feeling clear.”

Boria also credits meditation with helping him to clear out non-useful information and focus on what he needs to in a game.

“There are some times where we have a very close call,” Boria says. “I’m looking at it, and I say, ‘He has to be offside.’ I’m telling myself that. But my body is running with the play, and I become aware of my body running. I tell my mind to quiet down and I keep going with it. In cases where I am in the right position and my feeling conflicts with my thought, in reviewing a play, usually my feeling will be right.”

A third aspect of Boria’s study is his academic specialty—sociology. Understanding and navigating the ways that people from different cultures interpret the rules and gestures of soccer is a crucial part of being an effective referee.

“One thing I’ve been doing is studying the league in each country and what they consider fouls,” Boria says. “For example, African countries often make strong tackles, even stopping the ball with their cleats. However, if you jump through a tackle with high cleats in Latin America, players take exception as that is not normal play for them. Even though, as referees, we apply the laws the same to all teams across the planet, you have to work with players who may, in the same game, interpret the laws differently. This requires knowledge of cultural differences in styles of play and only comes with study and hard work.”

During the World Cup, Boria was on the field for four games as a reserve assistant referee. “It was a great experience to work with and learn from the best referees from all over the world. And it was a proud moment as well to be there when Mark Geiger, Sean Hurd, and Joe Fletcher became the first USA-based referee crew to advance to the round of 16.”

Boria plans to continue his career as a referee and hopes to continue teaching. He spent last year teaching many classes, including the history and sociology of sports at Lewis University in Romeoville, Illinois. “That was a fantastic year of teaching,” he says. “I got to put all the personal research, experience and study I’ve been doing into the classroom.”

Boria is grateful to have had the learning experience of the World Cup, but now he is preparing for upcoming matches. “I have the same goal I did before the tournament: I want to improve every single game.”