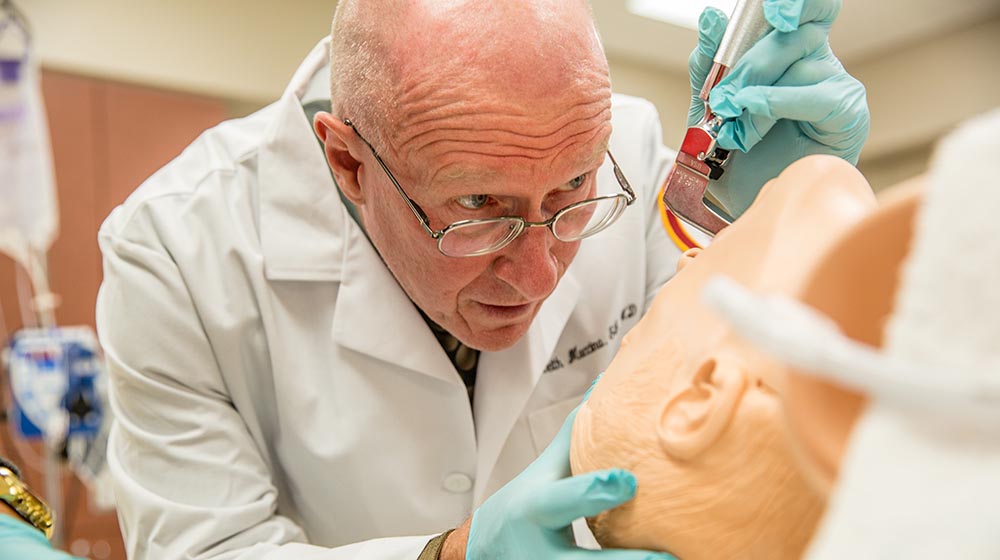 Priest, physician, and educator Keith Muccino, S.J., (MD ’77) had multiple callings in life, so he chose to follow them all

While a student at the Stritch School of Medicine, Keith Muccino, S.J., (MD ’77) found himself attracted to several specialties and chose to do a “rotating internship” to allow himself more time to decide. When he found himself still unable to choose between internal medicine and emergency medicine he applied to residency positions in each.

Muccino ultimately matched in internal medicine and completed his residency in Connecticut. As he finished that training, the hospital in Pennsylvania where he had done his internship contacted him, seeking a board-certified internist to staff its emergency department. He took the job, recognizing that an opportunity to be “both” was now presenting itself. Thus began his career path of being, not an “either/or,” but an “and.”

“Over the seven years that I did emergency medicine, I was as ‘happy as a clam,’” says the New England-born Muccino. "I looked forward to going to work every day, and no matter how crazy the day, I came home feeling satisfied.”

Practicing in a high-intensity environment, Muccino saw the need to find ways to nurture his spirit, so he became involved in his local parish teaching religious education and made an annual retreat. Although happy in his work as a physician, he began to feel a call to priesthood.

“But it created a dilemma,” says Muccino. “There was no way that I was going to give up medicine! If I was going to make any change in my life it would be to add priesthood to medicine. But it wasn’t clear to me how to create this combination.”

While on his retreat that year, Muccino was introduced to a Jesuit priest who was also a physician and suddenly he realized that it could happen. “In becoming a Jesuit, I could be an ‘and,’” he says. “I knew then that there was no looking back.”

Throughout Muccino’s Jesuit formation and seminary training, he remained active in medical practice either as an internist or as an emergency physician. In 2005, he came to work at Loyola, where he has continued his tradition of flourishing in more than one role. He is an assistant professor of internal medicine, as well as associate dean for clinical performance. He is also director of continuing medical education and executive director of Stritch’s Center for Simulation Education. And he just completed his recertification in emergency medicine.

“Returning to my alma mater has been the fulfillment of a wonderful life-journey," he says. "I didn’t know specifically what I was going to be doing when I came here 10 years ago. It didn’t matter, since I knew that I would be happy doing whatever was needed.”