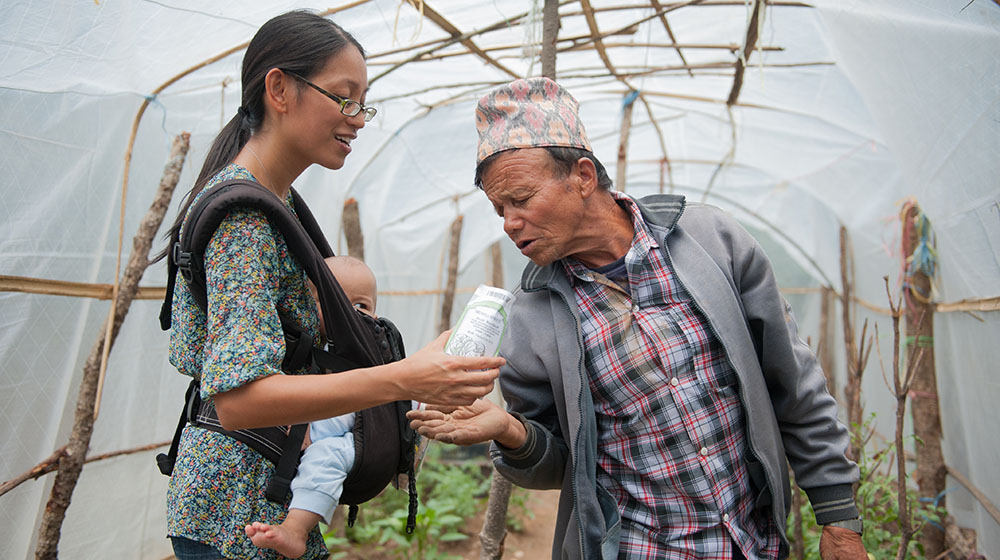 Ruth Farrales Lindberg (MD '03) speaks to a gardener and friend in the greenhouse while holding her son, James.

Ruth Farrales Lindberg (MD ’03) and Doug Lindberg (MD ’03) arrived in Kathmandu with their 3-year-old daughter, Maddie, in 2009. They needed to immerse themselves in Nepali language and culture before moving out of the capital city and into a rural area in the foothills of the western Himalaya, where they would go on to run a 50-bed mission hospital, providing clinical care, taking on administrative, fundraising, recruiting, and training duties, and participating in a community health outreach program.

“Kathmandu was hard,” Doug says. “We spent however many years between college, medical  school, and residency establishing a skill set, becoming good doctors. But in Kathmandu, we were like children in a new place. We weren’t doing what we were good at. There was culture shock and the stress of being away, and we placed a high value on assimilation, because we needed to be able to communicate effectively. It wasn’t an easy chapter.”

Doug and Ruth met in medical school at Loyola. They interviewed on the same day. They both felt called to work overseas and among the poor.

“We had several friends at Loyola who were of the same mind,” Doug says. “The emphasis on service there was an important part of our time there. In the first few years that was cemented, and then Ruth and I started dating and committing toward heading overseas.” They married in 2003.

They first visited Nepal during their third year of residency in family medicine. They found the hospital to be a good fit, and returned, after more training in the States, through a US-based organization called TEAM—a Christian mission organization that facilitates healthcare work overseas.

In Kathmandu, the Lindbergs took one-on-one Nepali language lessons during the day, trading off sessions watching their daughter. They lived in a few places for a month or so each before settling into an apartment for a year, adjusting to a very different way of life. In June of 2010, in a truck packed to the gills with all their belongings, Doug made the 26-hour overland drive—through flat southern Nepal at first, and eventually on windy mountain roads—to their new home and life in Dadeldhura in the western part of the country. Ruth and Maddie flew from Kathmandu to an airport 4 hours outside of Dadeldhura to meet him.

Dadeldhura sits at about 6,000 feet of elevation in the Himalayan foothills.

“There is a paved road coming up from southern part of country, the main artery,” Doug says. “The one road went right past the hospital, so many people could get to it. It’s a beautiful place. You could see the high Himalaya on clear days off to the north.”

The climate is temperate—highs in the upper 80s in the summer, dry in the winter, and usually not below freezing for more than a couple weeks a year, although homes are not climate-controlled, and neither is the hospital. Dadeldhura’s 50-bed hospital serves a population of about a million people.

“It was the only hospital where a woman could get a C-section in an area with the population of metropolitan Dallas. People traveled for several days to get there,” Doug says. A month after the Lindbergs arrived, the senior doctor and former medical director moved on, leaving Doug—then the senior clinician—unexpectedly in charge.

“We jumped in with both feet,” Doug says. “The medicine was challenging. For the first six months, never a day went by where we didn’t see a disease we’d never seen or a pathology advanced past what we’d seen before. There were jaw-dropping presentations. And there was no orthopedic surgeon down the street.”

Because it was the only hospital around, the Lindbergs treated all kinds of patients and symptoms. “We saw everything from preemies to grandmas and grandpas,” Doug says. “Whatever problems people had, we did our best.”

The Nepali staff had worked there for years, and although most didn’t have the Lindbergs’ credentials on paper, they had skills and experience that the hospital needed.

“They were wonderful,” Doug says. “I would bring someone in as a medical assistant to walk me through surgery when I had to cut off a leg.”

Ruth spent time working in the hospital as well, but shortly after arriving in Dadeldhura, she became pregnant with their second child. With their daughter at home, and eventually their son, James, as well, Ruth spent a good amount of time at home doing support work.

“She did fundraising, communication, built the website, and supported the volunteers,” Doug says. “She made it possible for me to do hospital work 70 hours a week.”

The Lindberg family spent three years at the hospital, the staff of about 65 people frequently changing. At times, the Lindbergs were the only Americans around.

“The American community fluctuated a lot in three years we were there,” Doug says. “There were 32 doctors who came and went, as well as therapists and nurses. We’d have junior doctors—interns and residents—who would spend six months at a time as part of their training and then move on. At times, we’d have Nepali doctors who would come for a year. There were usually about 8-10 people who were expats, from Sweden or Ireland, Trinidad or Australia. A nun from Kenya who was also a plastic surgeon came to work with us. She was 75 years old. She was awesome.”

One of the Lindbergs’ close friends from Stritch (and Doug’s former roommate), Jeremy LeMotte (MD ’03), brought his family to the hospital as well. LeMotte led the community health efforts and spent half his time in the hospital.

In what little spare time the Lindbergs had, they enjoyed hiking and getting together with friends for tea. They played board games. Doug would get up in the middle of the night to listen to Bears games streaming on the internet in his office. The Lindbergs were involved with the local church and helped show short-term volunteers the ropes.

The Lindbergs had planned to make Dadeldhura their long-term home, thinking they might return to the US when their children entered high school. Their original assignment ended in March 2013, and they returned to the States, where they planned to stay for a year before going back to Nepal. Two months after arriving back in the US, the Nepali government nationalized the hospital, taking over the staff and supplies. The Lindbergs hope to return to Nepal to work elsewhere, although their plans are not set. In October 2013, they jointly received the Early Career Achievement Award at the Stritch Awards Dinner, which coincided with their ten-year class reunion.

They Lindbergs do keep in touch with their friends in Nepal.

“It is amazing the world we live in now,” Doug says. “Even in remote rural Nepal, people have Facebook. With all the people who came and went, we stay in good touch via the internet.”

It is those connections that will likely draw the Lindbergs to write the next chapter in their lives, if and when they return to Nepal.