The stories she tells 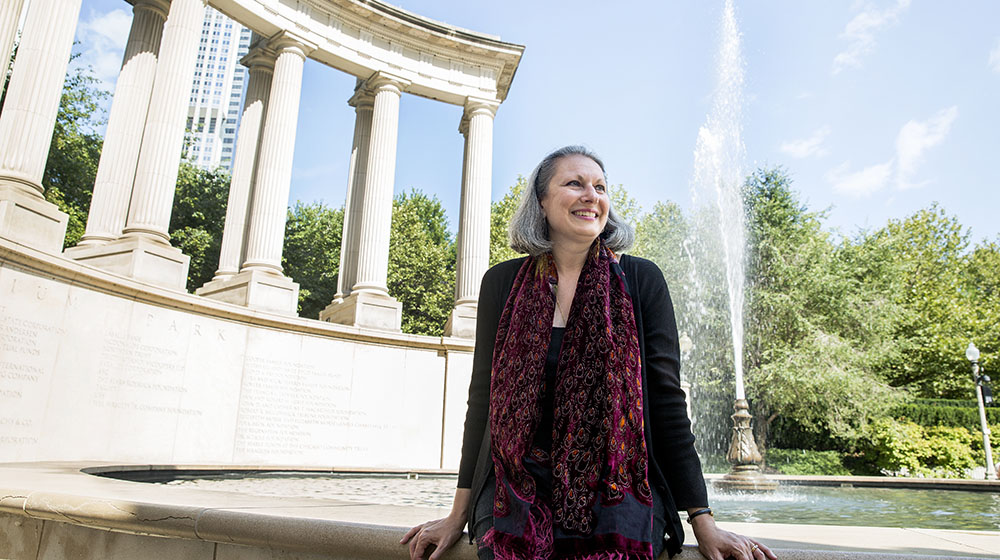 Lucia Mauro (JFRC ’85, BA ’86), lifelong lover of Italy and a through-and-through Loyolan, wrote her new film based on a man she met while traveling in Rome.

For Lucia Mauro (JFRC ’85, BA ’86), all roads lead to Rome—and to Loyola. A second-generation Italian American, Mauro has always been drawn to the culture and history of Italy. She studied the language for four years in high school, and the Rome Center was a big part of why she chose to attend Loyola where, in addition to her English and communication majors, she studied art history and the Italian language and literature. Her time at the Rome Center cemented her love for the place.

“That sent me on my journey. It really shaped my life,” Mauro says. She went on to become an arts writer and a theater/dance critic, writing for Chicago magazine and the Chicago Tribune, among others, but she also wrote a lot about Italy. She wrote for TravelAge magazine and for Fra Noi, an Italian-American newspaper, and published two books of her Italian photography.

Mauro has visited most of Italy and has traveled there many times since she attended the Rome Center. It was a chance encounter in Rome in 2009, in fact, that inspired her latest endeavor.

“I was standing in front of the obelisk in St. Peter’s Square waiting to meet a film colleague,” says Mauro. “A young American man leaned against the railing near me. We struck up a conversation, and I noticed that he was wearing a pair of shoes that didn’t fit him properly and were practically torn to shreds—as if he had walked halfway around the world in them.”

Mauro asked what had brought the man to Rome. The answer so touched Mauro that it stayed with her for years.

The young man’s brother was a Marine who had been killed by a roadside bomb in Iraq. He had hoped to backpack with friends through Rome, but died before he had the chance.

“So [his brother] took it upon himself to fulfill that dream,” Mauro says. “He put on his brother’s favorite shoes, which were too tight, and vowed not to take them off until he visited all the sights his sibling would have wanted to see in and around Rome. I was so moved by this encounter, I felt compelled to share this man’s story.”

Mauro recently wrote and directed a short film, In My Brother’s Shoes, based on this chance meeting. The film’s main character, Danny—a part written for stage-screen actor Danny McCarthy—dons his brother’s combat boots and travels to Rome, where he processes his grief and better understands his own capacity for sacrifice through the diverse people he randomly encounters. A crucial scene was shot just outside the JFRC’s entrance at the foot of its iconic tree. Mauro’s husband, Joe Orlandino, encouraged her to pursue screenwriting, and eventually produced the film, as part of Atlas Media Group, together with Polymyth Productions.

It took several years after meeting this man for Mauro to make the film. She was immersed in other projects. In addition to her arts writing, she taught dance history at Loyola, and also taught at the Rome Center. But in 2012, Mauro was diagnosed with ovarian cancer, and her life changed.

Mauro received treatment from Ronald K. Potkul, MD, FACS, FACOG at Loyola. “He saved my life. I love this man,” Mauro says. “Loyola is pivotal in my life. I just can’t speak enough about the care and the compassion and the professionalism of Dr. Potkul and the nurses and his staff.”

As Mauro went through treatment and recovery, she couldn’t stop thinking about the man she’d met in Rome.

“Certain things were on hold,” Mauro says. “I couldn’t really teach at that point. My own experiences were filtering in. I said, ‘When I get through this, I’m making this film.’ That’s what sustained me through my treatment, just thinking about it.”

In the spring of 2013, Mauro decided to return to Italy.

“When you go through something like that—surgeries and chemo, you get nervous about a 10-hour flight,” Mauro says. “But I needed to challenge myself. I took this trip and I was ok. I never got sick. When we travel, when we walk around and take trains, we meet people, and we will most likely never see them again, but they stick with you. That happened to me. From my own journey, I was able to build the story and other characters around Danny. The truth of the matter is that Danny is the brother of the fallen Marine, but he’s also me, moving on with my life.”

Because of the subject matter of the film, and because of her own challenges, Mauro wanted to do something beyond the movie. Proceeds from the film will benefit veterans’ organizations, including the Pritzker Military Museum & Library’s Veterans Information Center, through a nonprofit, also called In My Brother’s Shoes, Mauro created.

Mauro is now screening In My Brother’s Shoes and submitting it to major film festivals. A screening at the Lake Shore Campus is planned for this fall. She is also working on a film about Anita Garibaldi, the wife of Italian revolutionary Giuseppe Garibaldi and a revolutionary in her own right—from the perspective of an interview with American journalist Margaret Fuller. The film was inspired by Anita’s statue on Rome’s Janiculum Hill.

“We never quite know where life is going to take us,” Mauro says. “Loyola and Rome have been constant influences in my life and career, and my life keeps circling back to both.”