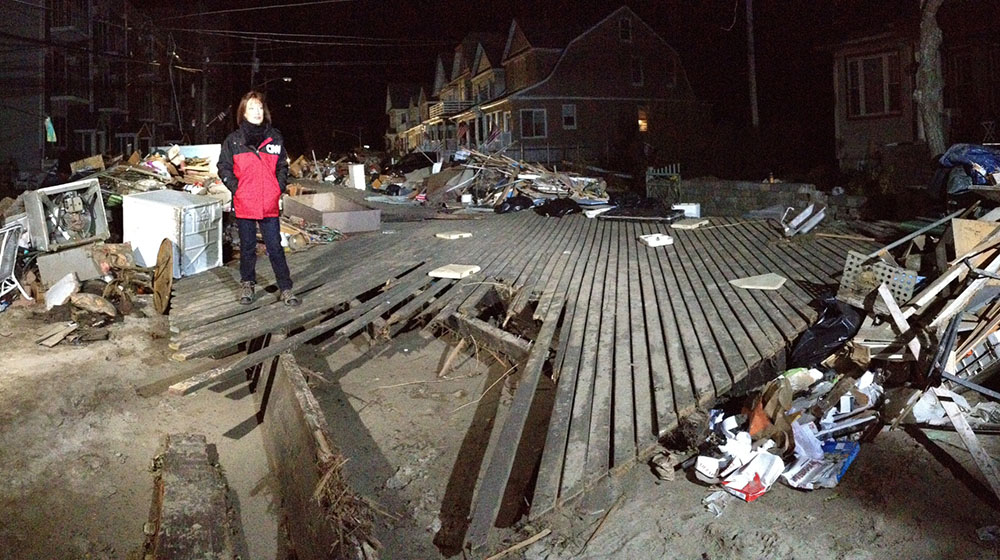 As a national correspondent for CNN, Susan Candiotti (BA '76) reports from wherever history is being made—from the Justice Department to the aftermath of natural disasters. Through accurate and compassionate reporting, she shows viewers what’s going on in the world and allows those involved to tell their stories.

Susan Candiotti (BA ’76) has had a front seat to history for the past 20 years, interviewing current and former presidents and playing a significant role in covering some of the most important and memorable stories of our time. As a CNN national correspondent, she has helped viewers make sense of tragedies that have reverberated throughout the country and beyond—from the Oklahoma City bombing to 9/11 to the Sandy Hook shootings.

Candiotti, who specializes in terror cases and law enforcement reporting, says she always has gravitated toward stories involving crimes or tragedies, not just to report the events, but also to give a voice to those affected. “When you cover these kinds of stories, there’s the horrific event, but there’s also the people who suffer from it,” she says. “There are victims whose stories need to be told.”

And when a big story breaks, Candiotti is aware that viewers can be hanging on a reporter’s every word. “You have to take your role very seriously and make sure you get it right, because people are counting on you,” she says.

In spite of how difficult it can be to continually be part of people’s worst moments, Candiotti says she is doing the work she was meant to do. She grew up in the 1960s during the Civil Rights Era, and she believed that the TV reporters who covered the events of the day were fortunate to witness history in the making.

“They were trying to make a difference by telling me what was going on in the world around me. I remember thinking that was what I would like to do,” she says.

Candiotti was born in Long Island, New York, and grew up there and in Cleveland. She attended high school in Altoona, Pennsylvania, and then went to Loyola to pursue a degree in communication arts mass media. She was part of the honors program and spent a year at the John Felice Rome Center. She’s thankful to her parents for giving her these opportunities, which provided the foundation she needed and taught her to communicate with different kinds of people in different settings.

“Loyola helped instill a sense of the world around me and helped me see how each one of us can make a difference,” she says.

After graduating, Candiotti spent four years in Binghamton, New York, where she learned firsthand how to be a TV reporter. She then worked at a station in Buffalo, followed by two local stations in Miami. In 1994, CNN came calling, and she took a job in the network’s Miami bureau.

During her 15 years in that bureau, Candiotti covered earthquakes, hurricanes, political conflicts, economic issues, hostage takeovers, and plane crashes in Florida, Central and South America, and the Caribbean including Cuba. She traveled with US troops on a mission to Kuwait in 1998.

On 9/11, Candiotti was in Miami. She quickly learned from her law enforcement sources that the hijackers had been living in the area, and she was the first reporter to break that part of the story. She spent weeks investigating who they were and how they trained. A month later, she was sent to Washington, DC, to cover the Justice Department’s 9/11 investigation.

In 2002, Candiotti’s CNN investigative team received a National Headliner Award for continuing coverage of 9/11, one of several journalism honors throughout her career. In 2008, she transferred to the New York City bureau.

She was the first CNN correspondent on the scene of the 2012 Sandy Hook School shootings in Newtown, Connecticut. Candiotti says she tried to do her part, “by honoring those who were lost and talking to brave parents who wanted everyone to know what their children meant to them.”

Candiotti says these stories stay with her long after they are regular fixtures on the news. She doesn’t try to avoid emotion while covering a story. “It’s normal to be sad. You can’t help but feel someone’s pain,” she says.

Many of the high-profile events that Candiotti has covered have changed the world. But when asked to name the most important stories of her career, she recalls a lesser-known assignment from her first job. While she was working at the TV station in Binghamton, a fire claimed the lives of all the children in one family. Candiotti was asked to interview their mother. She says she still remembers how difficult it was to approach the woman, who eventually was able to share her feelings about the loss.

Candiotti says this early experience shaped the way she views her role as a journalist. “To this day, I look at these situations as giving people an opportunity to remember and honor their loved ones,” Candiotti says. “In a way, this enables all of us to help them heal.”

Candiotti repeatedly has been inspired by people pulling together to help others in the aftermath of misfortune. And she has learned how resilient the human spirit can be. Many people get stronger in the face of great obstacles, perhaps even to the point of becoming activists, she says.

This past summer, the University honored Candiotti at the annual Founders’ Dinner. She received the School of Communication’s Damen Award, recognizing her as a distinguished alum with leadership in industry and the community, as well as in service to others.

Candiotti hopes to continue to make a difference as a trusted source of news and information. Newsgathering is evolving, she says, and it’s an exciting time to be in the industry, even though no one knows exactly what the future will bring. One thing that will not change: “There’s a thirst for knowledge that will always be there,” she says.

Candiotti feels lucky to be in the position to share people’s personal stories with the world, whether triumphs or tragedies.

And she’s always ready for the next big story. She has a bag packed at all times, in case she needs to jet off in pursuit of the facts. “I look at every day as an adventure,” she says. “Anything can happen at any time. I never know what a day will bring.”