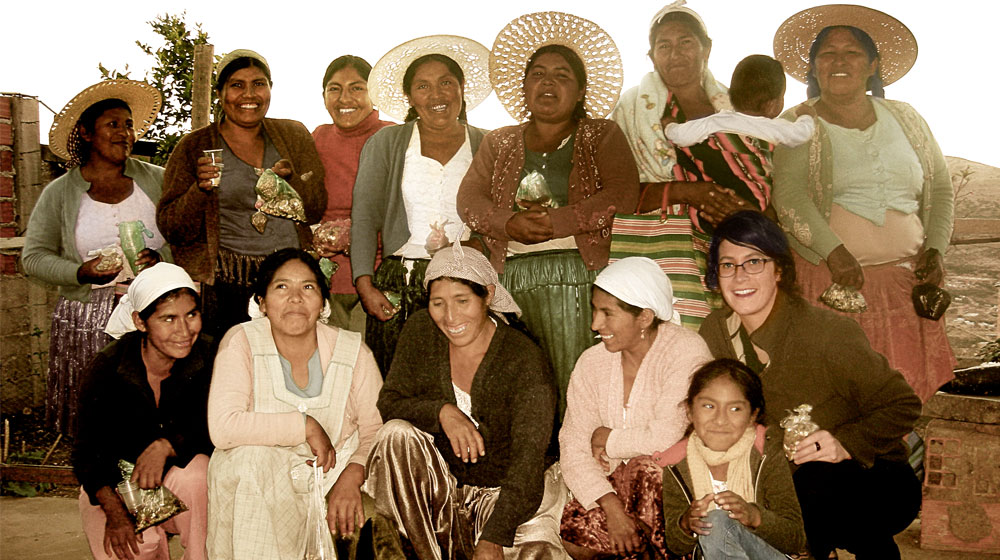 Annemarie Barrett (BA '12), bottom right, poses for a photo with some of the friends she's made during her time as a lay missioner in Bolivia. (Photo: Courtesy of Annemarie Barrett)

After spending three years as a lay missioner in Bolivia, working and learning alongside the locals in her community, Annemarie Barrett (BA '12) still thinks her biggest accomplishment might just be the decision to come to South America in the first place.

The St. Paul, Minnesota native’s desire to volunteer abroad was planted after a study-abroad experience in El Salvador. From those four months in Central America—and with some help from Loyola’s Campus Ministry office—Barrett decided upon the Franciscan Mission Service after graduation.

Not only was the School of Communication graduate thrilled by the opportunity to head to Bolivia, she also found inspiration in the organization’s approach. It focuses on getting to know locals and following their lead on what work needs to be done. That meant Barrett traveled to Bolivia with no firm job in place.

“My first six months to my first year here were focused on relationship building and getting connected with people in the local community—and then some of that involved getting connected to local work that was already happening,” she says. “I was doing a lot of listening and a lot observing in the first year, and from there I took on a support role.”

That support role took shape when Barrett joined a team pursuing and promoting urban farming. After spending her first six weeks taking Spanish classes, another lay missioner put her in touch with a Bolivian woman who offered families an opportunity to strengthen their communities and reclaim a part of the life they left behind in el campo, or rural Bolivia.

In Barrett’s city of Cochabamba, farming families from rural Bolivia have been migrating to a more urban life. There are a number of reasons for moving—better education opportunities, climate change, industrialization, financial reasons—but there are just as many reasons why relocating doesn’t turn out the way they expect.

From the language they speak, their skin color, their clothes, and even the way they eat, many migrants face both economic and social challenges. “A lot of our work is about valuing the culture that they’re coming from,” Barrett says. “Life before they migrated is often much healthier or much more vibrant than what they find when they come into the city. A lot of the families have migrated into the city with this vision of ‘I’m going to have a better life—a better life for my kids.’ The development of the city is going to open me up to all these resources that I didn’t have before—when in reality, a lot of what they find is that they experience much more social challenges and discrimination.”

As a part of La Pastoral de la Madre Tierra (the Mother Earth Pastoral Team), Barrett works with 15 families in the Santa Vera Cruz Parish. Often she assists women who have undergone an adjustment of their own. Instead of working alongside their husbands every day as they had on their farms, these women suddenly find themselves alone taking care of their home and children. Showing them how to take advantage of their small garden space, the project gives them the opportunity to start growing everything from potatoes to peaches and peppers to beans.

While Barrett’s work addresses the practical concerns of saving money and giving access to organic foods, she also knows there’s a spiritual side to it as well.

“When they produce their own food, it really is a huge self-esteem booster, because they are able to provide more vegetables and healthy food for their families,” Barrett says. “They’re also able to recuperate a knowledge that they’ve always had but are in a crisis of losing—because so many people believe that they can’t produce the same way in the city. These women are producing themselves with just support from us more than anything.”

Barrett has now been living in the city for three years and officially renewed her contract for a fourth with the Franciscan Service Mission. For doing work that relies so heavily on building relationships, Barrett has found the longer she stays the deeper her ties to the community become.

“There’s so much joy in the work that we do,” Barrett says. “That’s a really beautiful thing that I hope to share with the people who are supporting our work. When it’s based on relationships like this work is, the work that we do is incredibly joyful.”